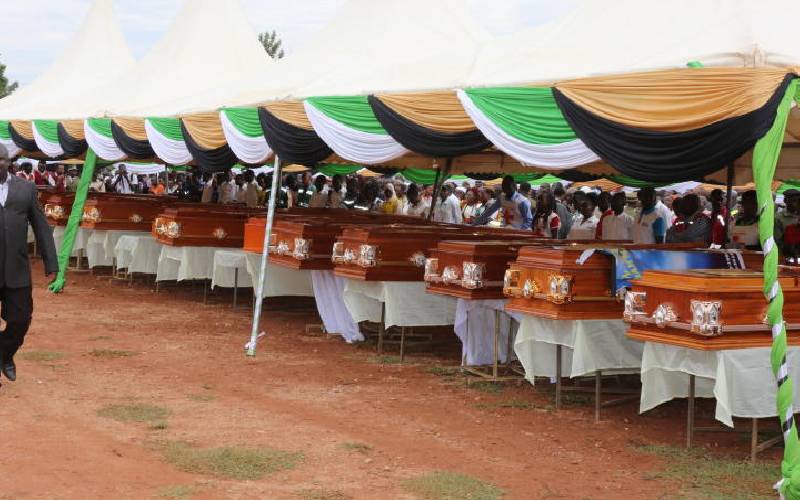 We all need money, and badly so. But the appetite for money in Kenya is on another level all together. Every opportunity that presents itself for either giving or receiving money is grabbed without any sense of moral duty to what is right.

Take the case of contributions at funerals. It is a perfect place to read or even experience our true attitude and behaviour towards money. Of course, funerals at whatever level tend to be very expensive.

Families in their own economic class, especially those in the middle-class bear a great responsibility in ensuring a reasonably decent farewell for their loved ones. The upper class will not be bothered with funds for the funeral, but with image surrounding the farewell. The low class has social solidarity – where it works – to ensure one of their own has some form of decent burial.

Friends and relatives of goodwill come in handy in making the much-needed contributions. My curiosity, however, was drawn to some extremely generous contributions made and the curious emerging behaviour at least in three funeral events I witnessed in the past two months.

The primary school in the neighbourhood is an important institution and so gets Sh200,000. The list of who gets what is revised speaker after speaker as contributions keep rising for the groups present at the funeral and the institutions deemed ‘relevant.’ The arena turns out to be a market place for selling interests that have nothing to do with the primary purpose of gathering in the bereaved family.

Second, at least from the three experiences and what we know from the media regarding VIPs attending funerals, people seem to be very comfortable with political speeches at funerals. Many people flock to where politicians attend funerals. There is a magnetic political attraction people find in political speeches.

Perhaps we have crossed the line of mourning with the family of the deceased. The content of what people say at funerals is hardly about consoling the bereaved. And, the crowds (ideally mourners) enjoy attack and promise-making speeches. Perhaps we have reached a point in history where a majority of people who attend funerals just come to register company and moral support to the family but, more importantly, also use the very occasion to advance other personal and socio-political agendas.

Third, the presence of “crowd for hire” specifically to cheer or boo speakers is a phenomenon on the increase. So a VIP ‘mourner’ enters a funeral space with fun and pomp escorted by shouting groupings. The spectacle that accompanies arrivals turns the mourning families’ grief into misplaced feelings. The big thing of the moment is the arrivals of who is who.

Again, perhaps as a society, we have moved on in our understanding of death. The arrival of visitors of the kind into a bereaved family was meant to console and help the family heal faster and move on in life. Maybe the new way of dramatising funerals is healing and helps families heal and move on faster. I say this ironically because some families seem okay and entertained by political drama. This is something culturally baffling but, yes, true. That explains why in some funerals police are engaged to deal with running battles between political opponents.

Fourth, the tension between worship service in honour of the deceased and/or consoling the family and the political activism is quite unhealthy. Some families seem to favour political presence than a worship service. If a VIP is attending a funeral the anxiety among mourners is palpable.

People want prayers hurried up so more time is created for speeches and political drama. This is quite a contradiction. We are a nation that recognises God above all and in all. Yet, at a critical moment like a funeral, priority is given to matters that can be discussed and dispensed in many other forums.

Last, it appears that the meaning of mourning is being redefined. However, the loss of a loved one to a family cannot be redefined. Families need to grieve in order to heal and move on. We, therefore, need to find a balance between the much cherished political drama and truly being there for the grieving family.

Dr. Mwangangi thanks stakeholders for contributions and cautions against politicking with donations

By Patrick Khaemba | 9 hours ago

By The Standard | 9 hours ago

By Michael Kiptoo | 10 hours ago

By Njonjo Kihuria | 15 hours ago