Key questions as we mull over BBI report 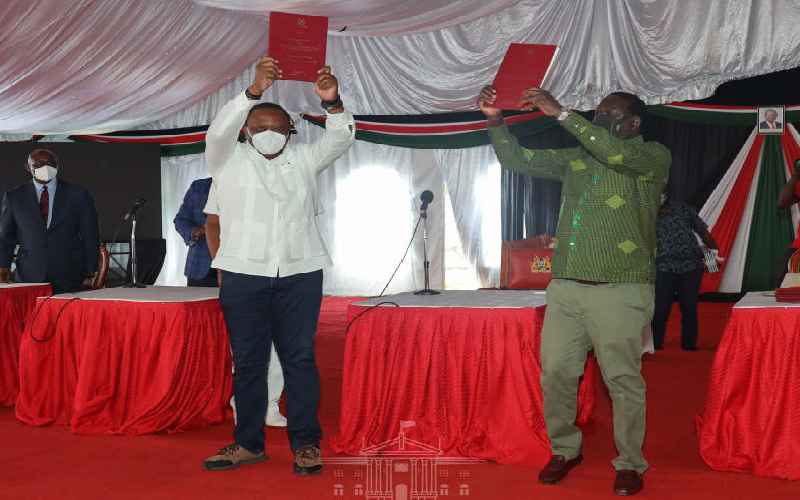 This week, the Steering Committee on the Building Bridges Initiative (BBI) finally released its report. According to the committee, one major problem the initiative hopes to solve is to transform Kenya into an inclusive country where power and prosperity are shared among all communities as opposed to the ‘winner-take-all’ system that has resulted in hotly contested elections that perpetuate ethnic polarisation.

It is noteworthy that Kenyans have grappled with the issue of ethnic-based politics and historical injustices that have resulted in marginalisation, land disputes and violence. We have tried to study and come up with solutions through several commissions of inquiry that looked at root causes, historical injustices, corruption, election disputes, insecurity and land allocation. They include the Waki Report on post-election violence; Ransley Report on police reforms; Kreigler Report on 2007 elections; Ndungu Land Report; TJRC Report; Goldenberg Report; 2018 Report on Forest Management; Akiwumi Report on Ethnic Clashes; among others.

Kenyans must thus ask themselves why the most far-reaching reforms have always hit strong headwinds that prevent them from rectifying historical issues such as sharing of the national cake, marginalisation, use of state resources and power that tips the scale towards state candidates during elections, violation of Kenyans’ rights by the state and disregard of the rule of law.

The BBI report recommends changes regarding devolution in terms of raising the percentage of monies going to the counties; changing the structure of the national executive to expand it to a more inclusive and accommodative one that ‘brings together the different groups in Kenya’; transforming Kenya into a parliamentary system of governance; and, changing the structure of policing by removing the National Police Service Commission and changing the legal status of the Independent Policing Oversight Authority into a Commission.

Other recommendations touch on the roles of the Auditor General, Attorney General, Director of Public Prosecutions and the Judiciary, our national philosophy, the formation of a youth commission and a rethinking of the education system. The steering committee has urged Kenyans to look at and interpret their recommendations in a holistic manner. I totally agree and urge Kenyans to further ask themselves why most attempts at reforms in Kenya have met strong opposition, especially changes that touched on accountability and removed power from political players.

Over the years, Parliament and the Executive have publicly attempted to neuter and defang the office of the Auditor-General; judicial independence, especially the appointment of judges; county governments; the Salaries and Remuneration Commission; and, legislative provisions on police independence such as the power to hire and fire the Inspector General of the Police.

Other accountability mechanisms that have been challenged by the establishment include the status of constitutional commissions that have taken over sweeping powers that were traditionally vested in the executive; freedom and independence of the media; legitimacy of civil society organisations; and the right to protest.

Which raises the following questions: Will fresh constitutional changes alter these attitudes? Are we better off dedicating time and resources to the full realisation of the current constitution by rededicating ourselves to the national values and principles of governance that include patriotism, national unity, sharing and devolution of power, the rule of law, democracy and participation of the people, human dignity, equity, social justice, inclusiveness, equality, human rights, non-discrimination and protection of the marginalised; good governance, integrity, transparency and accountability; and, sustainable development?

Most importantly, is there anything that prevents one, two or three dominant tribes from forming a winning coalition and reserving all state appointments to themselves thereby perpetuating the winner-take-it all narrative?

I urge Kenyans to reflect on how to strengthen our democratic institutions because they are vital in ensuring that the system runs according to the law and not by temporary and selfish whims of leaders in power. To do this, we must all dedicate ourselves to respecting and observing the Constitution and the law even when we don’t particularly agree with it.