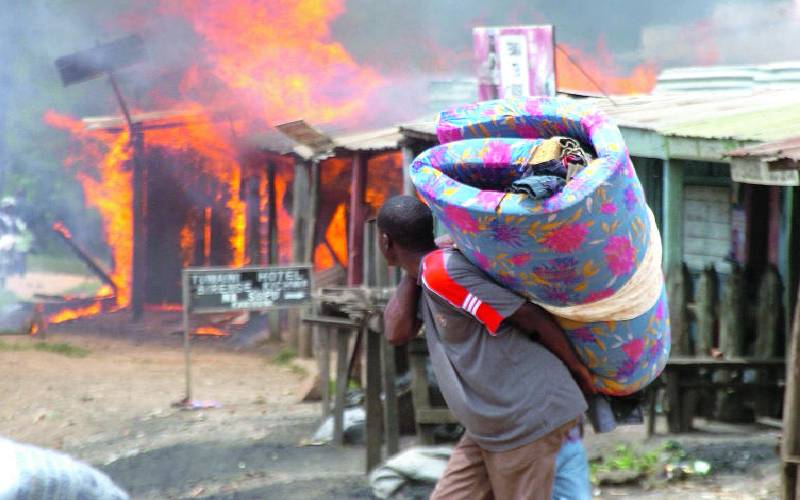 As 2022 succession politics gathers momentum, the country’s political stability has come under public scrutiny in recent days. The recent arrest of MPs Johanna Ngeno and Oscar Sudi over incitement to violence has fuelled speculation that the next polls will be anything but peaceful.

Following the 2007-08 post-election experience, ethnic relations in Kenya have become fragile – so much so that it takes a coalition between kingpins to defuse tribal tension, if not violence, every election circle.

The growing concern, however, is the sustainability of politically brokered peace. In the run-up to the 2013 elections, Uhuru Kenyatta and William Ruto entered into an alliance to end what many had described as historical differences between the Kikuyu and the Kalenjin.

“We brought together two communities that were previously thought couldn’t work together,” DP Ruto is on record saying.

Today, some leaders are warning President Kenyatta against reneging on his famous ‘kumi yangu, kumi ya William’ remark. Sudi (Kapseret MP) has been quoted on several occasions saying “sisi sio wajinga”, we’re not fools. Perhaps the legislator should be asked to define “sisi”.

Some politicians have been making utterances bordering on incitement.

Needless to say, this kind of talk has the potential to trigger tensions and even conflict.

You see, political “marriages” can help prevent tribal tensions, but their ineffectuality is laid bare by the dynamic nature of politics.

If the 2013 presidential elections were an experiment to defeat the International Criminal Court cases in which Kenyatta and Ruto were charged with crimes against humanity, 2022 elections are about character reinvention and self-preservation.

To save the United States, Abraham Lincoln maintained that Americans had to disenthrall themselves. To save Kenya from tribal tensions, we must free ourselves from the traditional authority of tribal kingpins. We must begin to see ourselves as a people with shared aspirations that can only be achieved when we come together.

Ideologically, we lack a shared past; because of this cracked foundation, we easily crumble due to ephemeral political (re)alignments. This is what the Building Bridges Initiative ought to fix: Look into the root cause of divisive elections.

We have failed as a people to establish good government from reflection and choice. We have accepted to have our political transactions on accidental and forceful terms rather than on clear democratic conscience.

To genuinely address the question of unity, we need to ‘cosmopolitise’ every part of the country by implementing the narrative that every Kenyan can live and work in any part of Kenya without a sense of fear. How do we do that? Many would ask.

There are two ways of achieving this: One, by improving economies of the county governments in order to create more jobs. This will attract qualified candidates from within and without the county.

That is if we eradicate favouritism, corruption and nepotism at the public service sector.

When an area is ethnically diverse, the notion that particular resources such as land belong to a specific community naturally dies.

Equal distribution of resources will solve the problem of marginalisation so that one community doesn’t feel threatened by the incursion of the other.

Also, it’s the federation of tribes that forms the nation. The relation between tribes leads to the development of tribal identities that preserves such things as culture.

“Maasai Mara in its entirety belongs to the Maasai community, don’t play games with us.” Narok Senator Ledama Olekina tweeted on September 14.

While the senator is right to express himself on the economic significance of the Mara to his community, his sentiments serve to fuel dissatisfaction among the Maasai hence threatening peace within the larger Narok area. There are better ways of protecting the economic activities of the marginalised without stocking embers of fire.

Two, we need to make democracy work at the grassroots level. Negotiated democracy isn’t sustainable. We need to deconstruct ethnic solidarity that accompanies us to the ballot.

Although this process would demand collective introspection and consciousness, it’s the first step towards turning our politics from an ethnic solidarity affair to a policy-based process of choosing leaders.

In Kenya’s book of genesis, unlike, say, Tanzania’s, the big communities felt entitled to acquire and preserve political power at the expense of small communities.

A sense of dissatisfaction has thus developed over the years. This situation has turned into a powder keg that even the smallest of things can explode.

Like converts of the Second Great Awakening who believed that they were on the verge of eliminating sin from the world, to make possible the second coming of Christ, Kenyan politicians advocate for ethnic solidarity to achieve private political interests as they promise temporary peace and prosperity.

Mr Ouma is a journalism student at Multimedia University of Kenya.

Debate on population versus land mass turn into 2022 politics