By Francis Githae Muriithi | 2mos ago

Two people have died while scores have sustained injuries following a grisly road accident involving a 14-seater matatu at Kombewa in Kisumu.

The accident occurred after the vehicle lost control and rolled several times.

Witnesses told The Standard that the vehicle’s tyre burst, causing the accident.

Nyanza Regional Traffic Commandant Mwang’i Ng’anga confirmed that two passengers died on the spot. A rescue mission was still on for other passengers trapped in the wreckage of the matatu.

Police said the driver of the vehicle was yet to be traced. It is still unclear the number of passengers that were in the ill-fated vehicle.

Kennedy Otieno, a witness, said that they heard a loud tyre burst and saw the vehicle rolling.

Well-wishers including motorists intervened and helped ferry some of the injured passengers to the nearby Kombewa Sub-County Hospital.

The accident occurred at a time when a number of cases have been reported across the country. 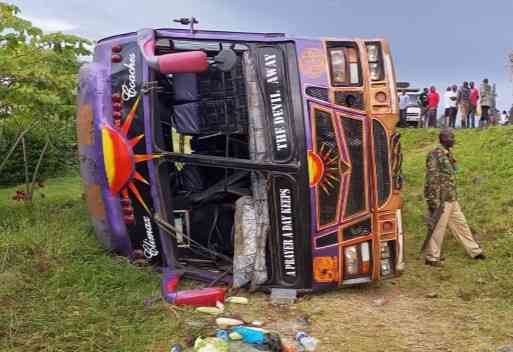 Premium The A to Z of vaccination from day to month-olds
Livestock
By Dr Watson Messo
41 mins ago
Twin loss for artistes lobby and copyrights board in legal dispute
News
By Kamau Muthoni
53 mins ago
Premium Eight measures to keep your farm disease-free
Livestock
By Dr Joseph Othieno
59 mins ago
Premium What's wrong with Museveni's son? General Muhoozi takes Twitter 'jokes' too far
National
By Peter Theuri
1 hr ago
.

By VOA 1 hr ago
US, South Korea fire missiles into sea in response to North Korea