Jail me, man tells court after killing brother for sleeping with mum 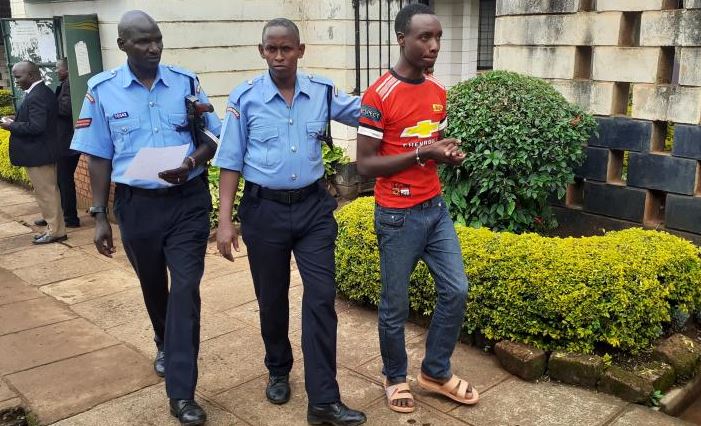 Brian Ondieki (pictured), the man accused of killing his brother, Benard Bogonko, over alleged incest with their mother in Kisii’s Kegati village has pleaded with the court to jail him on manslaughter charges.

Appearing before Kisii Senior Resident Magistrate Cynthia Makila, the accused told the court on Tuesday morning that what his brother had done was a serious crime and that he was ready to face the law.

The accused had earlier pleaded guilty to manslaughter charges.

Criminal Investigations Officers probing the matter had to seek the audience of the magistrate later in the afternoon to ask for more time to carry out further investigations, as well to have the suspect undergo a mental check-up.

However, the suspect again insisted to have the courts jail him. “I didn’t intend to kill my brother but what he did was beyond imagination.”

The Magistrate ordered that the accused be held at Kisii Police Station for a period of two weeks as detectives piece together the evidence.

A postmortem will also be conducted on the body of the deceased which was taken to Kisii Teaching and Referral Morgue.

Their mother Alice Kemunto, spent Monday night and Tuesday at Kisii Central Police station as law enforcers sought to protect her from the rage of the villagers.

According to police and corroborating information from the area Chief Alexander Nyakinyua, the suspect is said to have stormed his mother’s house and found the two in a compromising situation.

Ondieki then attacked his brother with a blunt object on the head killing him instantly. He later descended on his mother and beat her using the same object before fleeing.

The deceased was half-dressed at the time police picked the body from the scene. A plate of Ugali was placed on the table in the sitting room.

The woman’s husband who works as a security guard in one of the homes in Nyamira County arrived before his son’s body was taken away, later paying his wife a visit at Kisii Central Police station where he bought her soda and a loaf of bread.

Detectives said the woman had also undergone a medical examination to ascertain claims of having been involved in a sexual encounter with her son.

Investigators are also pursuing a possible family conflict that could have led to the killing.

Born of siblings: A young man's tough journey through life

By James Omoro and Eric Abuga | 4 hours ago