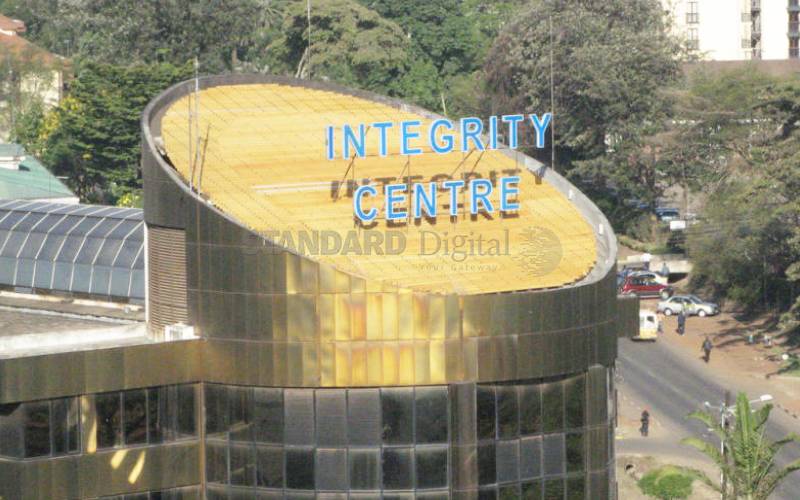 Anti-graft detectives were last evening looking for more suspects in the Sh4.1 billion tender for the construction of a multi-purpose mall in Kisumu.

Only 10 out of 33 wanted people had so far been arrested by the time of going to press, with the Ethics and Anti-Corruption Commission yesterday asking the rest to surrender.

EACC Chief Executive Officer Twalib Mbarak said the agency hopes to arrest all those who are wanted, to process them ahead of their arraignment.

This was after Director of Public Prosecutions Noordin Haji ordered their arrest over the construction of the LBDA mall at Sh4.1 billion.

They, alongside other LBDA officials, face accusations of inflating the tender for the mall by Sh1.6 billion.

Mr Haji said EACC received a complaint on July 28, 2015, that the construction cost for the mall had been inflated. Mr Oloo was the LBDA board chairman at the time.

When the mall was under construction, Haji said LBDA irregularly approved additional scope of works in a meeting held on December 18 and 19, 2015, for an additional sum of Sh620 million for construction of a showroom, tyre centre and a three-star hotel.

Further, the board allegedly approved a loan of Sh1.3 billion from Cooperative Bank by the contractor, hence enhancing the borrowing to Sh2.5 billion, despite the contractor having promised to finance 80 per cent of the project.

Consequently, a deed of variation was signed by Mr Abok and Oloo on February 17, 2016, varying the amount from Sh2.5 billion to Sh3.8 billion, without the approval and concurrence of the Treasury.

This, Haji said, constituted a 57 per cent variation against the prescribed 25 per cent under the Public Procurement and Disposal Regulations, 2013.

Following the variation, the DPP said, without approvals, Abok and Oloo irregularly executed three charges over LBDA’s land titles dated March 13, 2014, and January 19 and May 29, 2015, for Sh2.5 billion from Cooperative Bank.

“This singular act exposed LBDA’s property to the risk of sale in case of a default in the repayment of the loan. The charging of the property without approvals from the line ministry and the Treasury was unlawful,” reads the DPP’s statement.

Investigators found that whereas three firms submitted their bids after LBDA first advertised for the tender, all the firms were found non-responsive.

However, instead of rejecting their bids as required by the Public Procurement and Disposal Act 2005, the evaluation committee recommended the tender committee award M/S Erdemann Property Limited (EPL).

The tender committee awarded the tender on March 14, 2013.

Subsequently, on April 8, 2013, Abok and the then chairman David Oyosi executed the contract on behalf of the Government agency, while Mr Zhang and Mr Yang executed for Erdemann for Sh2.45 billion.

Haji said from the start of the contract, Symbion Kenya Limited carried out the function of the consultant in the construction of the mall.

His influence has been felt at the county assembly where he has been able to unite MCAs.

By Eric Abuga | 45 minutes ago

By Stanley Ongwae | 11 hours ago