Fire break out at school in Siaya destroys property 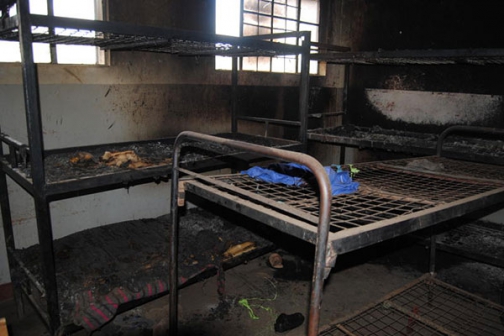 Students at Mbaga Girls High school in Siaya County lost property of an unknown value after fire gutted part of one of the dormitories on Friday evening. Police spent the night  at the school after a second fire incident at the  school  which was put off by  teachers  and members  of the  community.

The first fire incident occurred at school on Thursday morning.

According to the Principal Mary Lucy Abidha, the fire broke out while some of the students were taking their supper and others were in the dormitory.

Mrs Abidha said that the students raised an alarm and the fire was contained immediately by the help of school staff.

"The incident is sad. On Thursday we had a small outbreak but we managed to control it. We are doing investigations with the help of police to ensure we get the main cause of the two outbreaks," she said.

Siaya OCPD Hansen Kaloki confirmed the incident and said that the major cause of the two outbreaks has not been established.

"All students are fine and are in class. Nobody has been injured as reported in social media. Our officers will secure the school the entire night as we investigate," noted the OCPD.

Alego Usonga MP Omondi Muluan said that the two outbreaks is a clear indication that some people were determined to burn down the school.

"Action must be taken after investigations to ensure that the people who want to burn down the school are arrested. We do not have any casualties as being reported in the social media," added Muluan.

This's the secret to financial freedom

The man will always view you as a leech, latching on him for financial gain and will have no respect for you.