By Abdimalik Hajir | 7mos ago 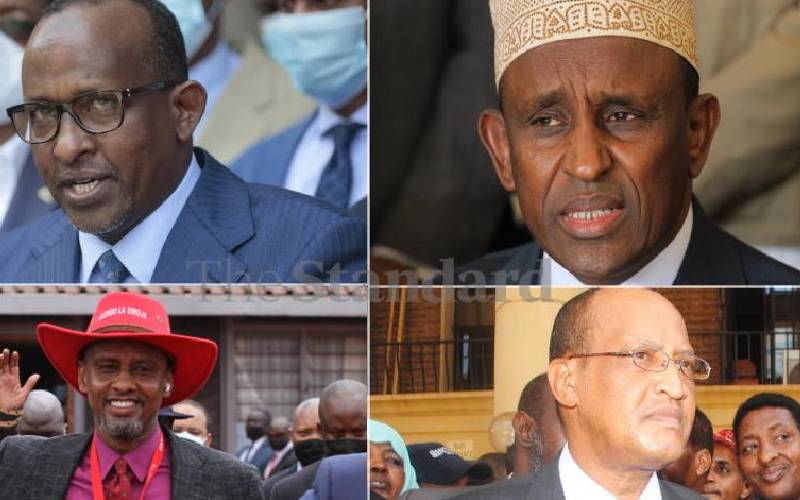 Garissa has been turned into a battleground after elders endorsed three candidates for governor race.

Three top contestants were endorsed by their respective clan elders and have launched campaigns across the county.

Picking a running mate is critical in the clan matrix as it’s the main negotiating item, akin to national politics.

The successful individual is expected to whip his clan to vote for his would-be boss.

Two weeks ago, Aulihan elders convinced Kenya’s Ambassador to Botswana and former Lagdera MP Mohamed Shidiye to step down in favour of former Governor Nadhif Jama. Jama is now the sole candidate from the Aulihan clan.

At the same time, the Abduwak Council of Elders gave the incumbent Ali Korane the green light to defend his seat.

He is facing competition from former military officer Dekow Mohamed who has been crisscrossing the county seeking support for his governor bid.

Mohamed and Korane are relatives.

Jama last week launched his campaigns in Garissa and promised to continue from where he left before he was ousted in the 2017 elections.

All the three candidates have their eyes set on picking a running mate from the Samawathal clan, one of the three major Ogaden clans that reside in the county.

Local analysts say the choice of a running mate will have an impact on the election outcome.

All the top contenders have their committees comprising of elders who are reaching out to the Samawathal clan that has in the past elections acted as a swing vote.

Samawathal elders who have in the recent past been retreating in Malindi with a view of working with coalition partners have already made demands to support a governor candidate.

In 2017, they entered into a pact with Abduwak under the Tolomoge alliance where they shared elective seats on the Jubilee Party ticket.

Tolomoge Alliance may not work this time round going by the huge demands of Samawathal which wants the Garissa Township seat currently held by Aden Duale as well as Township and Fafi ward representative positions.

Aden Sigale, a local political analyst, says picking a running mate for the top governor candidates will be a tall order as all major sub-clans are now seeking to capture the Ijara parliamentary seat.

He argues that parliamentary contenders from Ijara who carry the burden of supporting governor candidates are going to fail.

“No one wishes to be identified with candidates who are not popular on the ground, especially if you are seeking an elective position,” he told The Standard yesterday.

For Korane it's still not clear whether he will stick with his current deputy governor, with whom he has had a frosty relationship in their five-year term.

Garissa Deputy Governor Abdi Dagane has been trying to consolidate his Samawathal backyard perhaps to have bargaining power in the formation of coalitions.

Duale is also a key player in Garissa county politics and has declared the intention to defend his seat.

Despite supporting the election of Korane, the Garissa Township MP has been criticising his leadership.

During the visit of Deputy President William Ruto to the region, Duale declared that Dekow, popularly referred to as Major Dekow, will vie for governor on a UDA ticket.

Garissa Senator Abdul Haji and his brother Director of Public Prosecution Noordin Haji cannot be written off in Garissa county politics, as they enjoy a huge following.

The senator was endorsed by the Samawathal clan to defend his seat. They have been working with the committee to form a strong coalition.

Haji was elected unopposed in April following the death of his father Garissa Senator Yussuf Haji.

By Paul Ogemba 2 hrs ago
Paul Gicheru, lawyer who went to Hague court to clear his conscience

By Dennis Kabaara 2 hrs ago
Could Ruto lead charge in Africa to rescue much delayed SDGs?