By Judah Ben-Hur | 2mos ago

The circus at the electoral commission is far from over after it emerged that three other petitions were received at the National Assembly Main Records Unit seeking the removal of chairperson Wafula Chebukati and commissioners Boya Molu and Abdi Guliye.

The three petitions by Shem Otieno, each focusing on the respective commissioners, were allegedly filed about a month ago but were never presented to the Speaker.

The petitioner accuses the three of gross violation of the Constitution, incompetence and gross misconduct.

Mr Otieno accused Chebukati of undermining the Constitution and “arrogating himself all the powers of the commission”.

He said the Independent Electoral and Boundaries Commission chairperson undermined the authority of the commission by overriding, excluding, vetoing and ignoring the other commissioners when discharging duty, contrary to the Constitution.

“The chairperson usurped the powers collectively vested in the IEBC by constantly issuing policy and press statements without due regard and consultations with the other members of the commission,” reads the petition in part.

Otieno, in the six-page petition, paints Molu and Guliye as persons in collusion with Chebukati.

The petition was sent to the National Assembly on October 17 and officially processed by the Main Records Unit on October 25 but had not been delivered to the floor of the House, something Minority Leader Opiyo Wandayi sought an explanation for. Wandayi said the petitioner reached out to him, saying despite presenting the documents to the National Assembly, they had not been tabled in the House.

The Ugunja MP asked the Speaker to hasten the process and ensure the petitions are presented before the House so that due diligence can be done.

“I’m saying this in view of the fact that yesterday we did have certain petitions presented in this House concerning a certain set of commissioners of the same IEBC. For us to be seen as a House which observes and upholds the rule of law, we need to understand the whereabouts of these petitions quickly,” said Wandayi.

Speaker Moses Wetang’ula said he had not received the petitions.

Rarieda MP Otiende Amollo asked the Speaker to consider putting in place a system that will ensure everybody can know what petitions Kenyans are sending to Parliament.

“It’s important that we are seen as a House of equity and equitability,” he said.

On Tuesday, the National Assembly set in motion the process that might see the removal of IEBC Vice chairperson Juliana Cherera, Commissioners Justus Nyangaya, Francis Wanderi and Irene Masiti who rejected the August 9 presidential election results.

The petitioners accuse them of violation of the Constitution, gross misconduct and incompetence. 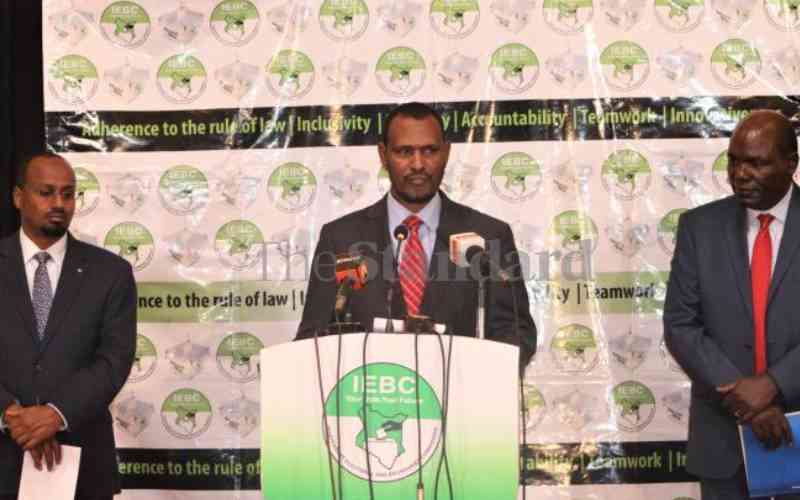 Premium IEBC report calls for key reforms before next poll
National
By Judah Ben-Hur
9 days ago
.