In pictures: Uhuru Kenyatta hands over power to William Ruto

Former President Uhuru Kenyatta has officially handed over the instruments of power to President William Ruto.

Kenyatta presented the instruments of power including the presidential ceremonial sword to President Ruto, some minutes after 1.00 pm at the Kasarani stadium in Nairobi.

Standing adjacent to each other, Kenyatta also presented Kenya’s fifth president with the Constitution, which he [Ruto] swore to protect and abide by. 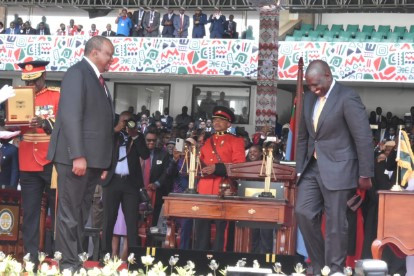 “I William Samoei Ruto, do swear that I will be faithful and bear true allegiance to the Republic of Kenya; that I will obey, preserve, protect and defend this Constitution of Kenya as by law established and all other laws of the Republic, and that I will protect and uphold the sovereignty, integrity, and dignity of the people of Kenya, so help me God,” said Ruto during his swearing-in. 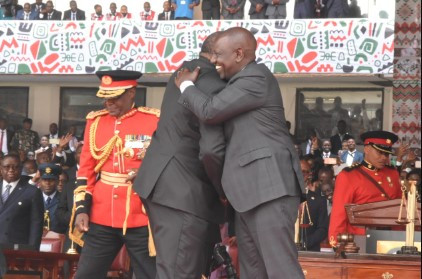 Ruto’s presidential standard (the president’s official flag) was hoisted as Uhuru’s was lowered to signify the change of guard. It is yellow in colour with a wheelbarrow at the bottom.

A 21-gun salute was then done in honour of President Ruto, marking the beginning of his tenure as Commander-in-Chief.