The mountain of debt President Uhuru Kenyatta’s administration has accumulated this past last nine years might pale against the benefits of the infrastructural projects that absorbed the loans.

However, the payment pain might be sharper than the benefits of more paved roads, electric connections, or bigger sea and air ports.

Uhuru, who has taken loans nearly three times as much as what his three predecessors borrowed combined, believes he will be vindicated.

Reacting to reports that described the second phase of the Standard Gauge Railway (SGR) from Nairobi to Naivasha as “the railway to nowhere,” an angry President dismissed the critics as visionless.

“Because you have no vision... you stay in Nairobi... you walk to your bar in the evening... you wake up and look for a matatu because you are going to where you know. But your reasoning cannot tell you to think of how the Kenya of tomorrow... the Kenya of our children will be...”

The SGR, a modern railway that runs from Mombasa through Nairobi into Naivasha, was built using close to Sh600 billion Chinese loans.

As at end of April 2022, data from the Central Bank of Kenya (CBK) shows that the country’s debt stock stood at Sh8.47 trillion.

It is expected to hit Sh9.45 trillion by end of June next year, according to projections by the National Treasury.

When Uhuru took over from Mwai Kibaki in early 2013, total public debt stood at Sh2.06 trillion. This means that by April this year, debt had grown more than four times.

And by end of June next year when the current budget cycle ends, the country’s debt will have grown by 359 per cent, according to projections by the National Treasury.

On the other end, by the time the current budget cycle ends in June next year, the country’s gross domestic product (GDP), or the ‘national cake’, will have expanded by 283 per cent.

Perhaps, just perhaps, Kenyans will begin reaping the benefits of these infrastructural projects that are expected to open up the economy a few years down the line.

Gerishon Ikiara, an economist, insists that borrowing is not bad as long as the money is used well; that project are well-conceived and much care is taken to ensure that every borrowed shilling is properly utilised.

“Every kilometre of road made, every school built, every dam built, it adds to the capacity of the economy to repay its debts,” said Mr Ikiara.

It is not easy to tell how much of a time-bomb this mountain of debt will pose until you begin to dice it up, even by juxtaposing it against the prevailing weak exchange rate where the shilling has lost ground against the US dollar.

In 2013, for example, there was more domestic debt (Sh1.1 trillion) than external debt at Sh962 billion.

Although much of the loan might have come to the public sector at the expense of the private sector, the government was insulated against exchange gyrations.

Second, most of the external loans (97 per cent) were either concessional or semi-concessional.

This means loans had low-interest rates, and longer grace and repayment periods, putting little pressure on the country’s revenues. Only 2.2 per cent of the loans, or just Sh21 billion, were expensive commercial loans that are given, at times at higher rates.

The stock of commercial loans has since grown by 5,614.3 per cent to hit Sh1.2 trillion. These are the expensive loans from international capital markets such as the Eurobonds, syndicated loans from commercial banks, and loans from China, especially China Development Bank that attract very high interest rates.

Indeed, by the time Uhuru got into power, for every Sh100 that Kenya Revenue Authority (KRA) collected, only Sh15 was used to repay interest.

But this has since more than doubled to Sh32 being used to pay interest, by end of June 2023, data from the National Treasury shows.

Interest payments are paid regularly, twice in a year, and have grown from Sh121.1 billion to Sh687.9 billion by of the current financial year.

Moreover, with the country grappling with a dollar shortage, the currency composition of the public debt has also been a cause of worry.

Most of the external loans, 66 per cent, were in US dollars by end of June last year.  In June 2013, only 32.2 per cent of the external loans were in US Dollars while those in Euros were 33 per cent. The National Treasury has also been trying to procure mostly Euro-denominated loans, especially from the World Bank, because most of the country’s tourist and export earnings are in Euros.

But Uhuru is not worried.

In a recent speech, the President said the only time that debt is a burden to a nation is if the nation is led by a cabal of looters;. But in a clean government, borrowing would be a ‘catalyst for rapid development’. He gave the example of South Korea and how it achieved its economic ‘miracle’ in a record 25 years, and it also achieved the rank of being the 4th most indebted country in the world.

“And the national question to us today is not whether the debt is good or bad. The more legitimate question has to do with what the next administration will do with borrowed funds. Will they end up in private pockets or will they be used to accelerate economic advancement?” said Uhuru.

He noted that in his administration, “we used other people’s money to close our infrastructure gap and to connect our markets.”

Indeed, the kilometres of paved road in the last nine years has increased from 11,230 to 21,826, data from the Kenya National Bureau of Statistics shows.

Ken Gichinga, an economist, reckons that with the borrowing the country has been able to address the infrastructure gap that has been hindering the growth of commerce.

The SGR, he notes, has also improved the safety of passengers compared to use of buses on the Mombasa-to-Nairobi route.

During Uhuru’s two terms, not only has the port of Mombasa been expanded but the country also built Lamu Port that will be used for trans-shipment.

It is the same with Jomo Kenyatta International Airport, which has also been expanded.

When the Jubilee Government came to power in 2013, only 27 per cent of Kenyan households had access to electricity. This has since grown to 75 per cent.

A new report by the International Energy Agency shows that Kenya is second after Rwanda in making the largest strides in access to electricity between 2015 and 2021.

But the President’s critics will hear none of it. They believe Uhuru has thrown this country’s fiscal policy to the dogs, with some studies showing that most of the borrowed cash only fueled corruption.

There have also been questions around the value for money for most of the mega projects, with the SGR dismissed by critics as a white elephant that will not pay for itself.

Uhuru has already advised his successor, whoever it will be between former Prime Minister Raila Odinga and Deputy President William Ruto, not to shy away from debts.

And given the lofty promises by the two leading presidential candidates, the borrowing spree is not about to end. 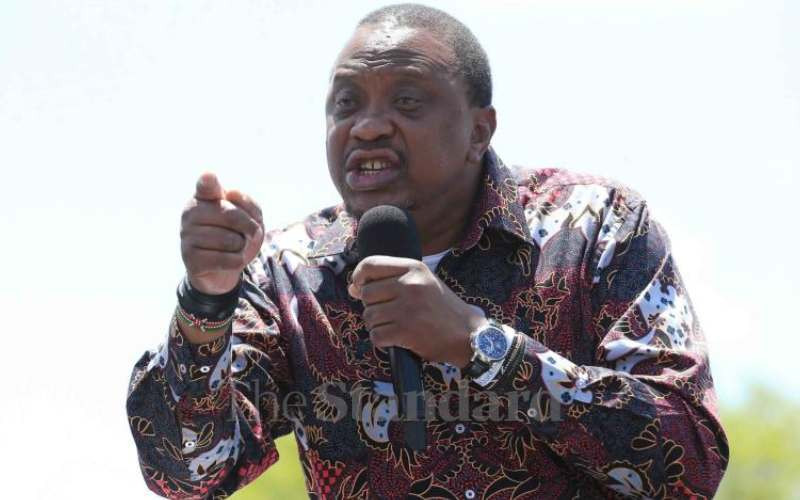 Big budgets reigned supreme amid wastage
Projects in roads and rail, and education have been close to the President Uhuru Kenyatta’s heart.
Business
By Patrick Alushula
2 months ago
.