The men and women who hold final card on Raila, Ruto win

By Nzau Musau | 5mos ago

Two hundred and ninety men and women proposed by the Independent Electoral and Boundaries Commission to run election in constituencies will hold the final card on who becomes the country’s fifth President in August.

In the election, now pitted as a two-horse race between ODM leader Raila Odinga and Deputy President William Ruto, returning officers are vested with the powerful role of verifying and declaring the final presidential vote.

This is unlike in the past when results released by the returning officers were deemed provisional until verified at the national tallying centre, usually at Bomas of Kenya. In 2017, the Court of Appeal turned the tables on this arrangement, affirming that the presidential vote released by constituency returning officers is final.

And unless parliamentarians change the law between now and election day, these officers hold the final legal card for whoever will be declared the President. The officers are drawn from a pool of experienced electoral officers, some of who have conducted presidential polls before.

“This is to bring to your attention that the IEBC wishes to appoint Constituency Returning Officers, County Returning Officers, and their deputies for purposes of the General Election 2022,” Registrar of Political Parties Anne Nderitu says in a letter addressed to the 82 compliant political parties.

The 2017 Court of Appeal decision, popularly known as the Maina Kiai decision after its lead petitioner, devolved electoral power to the field officers. The Court said the IEBC chairman has no business verifying or affirming results collated and tallied in places he has little control or involvement.

The Court stated that the station is the true arena for free exercise of the voters' will. It stated that what happens there is so elaborate and so open, so participatory that it makes no sense to tamper with what is declared there.

Besides the presiding officer, candidates or their agents sign the declaration of results, they are supplied with copies of declarations and opportunities for a recount before the final count is transmitted to the constituency. A copy of the results is then affixed at the entrance of a polling station.

“It is inconceivable that those details arrived at after such an elaborate process can be viewed as provisional, temporary or interim. The inescapable conclusion is that it is final and can only be disturbed by the election court,” the judges declared.

What is declared, the Court added, is clothed with a finality not to be exposed to any risk of variation or subversion.

“It sounds ill that a contrary argument that is so anathema and antithetical to integrity and accuracy should fall from the appellant’s (IEBC) mouth,” they added.

The electoral body had wanted the Court to allow its chair to verify the results before he declared them. But the court said the chair was ably represented by his officers on the ground.

It poured cold water on past practice where all the 290 returning officers trooped to Nairobi in all manner of transport to physically deliver the hard copy results. The court described this as a “spectacle” and “mischief.”

This practice mainly carried out in 2007 led to the then electoral boss, the late Samuel Kivuitu, to suspect the returning officers may have been cooking the results. There were inordinate delays in their arrival at the then national tallying centre at KICC.

In the electoral reforms that ensued, physical delivery was replaced with electronic transmission to guarantee the accuracy and integrity of the results of elections.

In the case, Kiai was the first respondent in the appeal brought by IEBC against him and other petitioners, Khelef Khalifa and Tirop Kitur. Others drawn into the case as respondents were the Attorney General, Katiba Institute and Coalition for Reforms & Democracy (CORD).

Some salient features of the Kiai Decision

- Returning Officers of the 290 constituencies are the ones to tally, verify count and declare the results of presidential elections

- IEBC has the responsibility to ensure accountability of the ballot papers issued, but without changing what was counted, confirmed and verified at the constituency

- Polling station is the true locus for the free exercise of the voters’ will and whatever is declared there is so final that it cannot be exposed to any risk of variation or subversion.

- The electronic transmission of tabulated results from the polling stations serves to safeguard the accuracy of the outcome of elections, not to change them

- IEBC Chairman is not the Commission, but he's one of its many officers who work in consort to deliver a credible election

- That the 2010 Constitution was neither an ordinary common-place act nor an empty ritual, but one that sought to cure historical mischiefs, among them the spectacle of 290 returning officers trooping to Nairobi with hard copies of results.

Below is a screenshot of the list of all the officers: 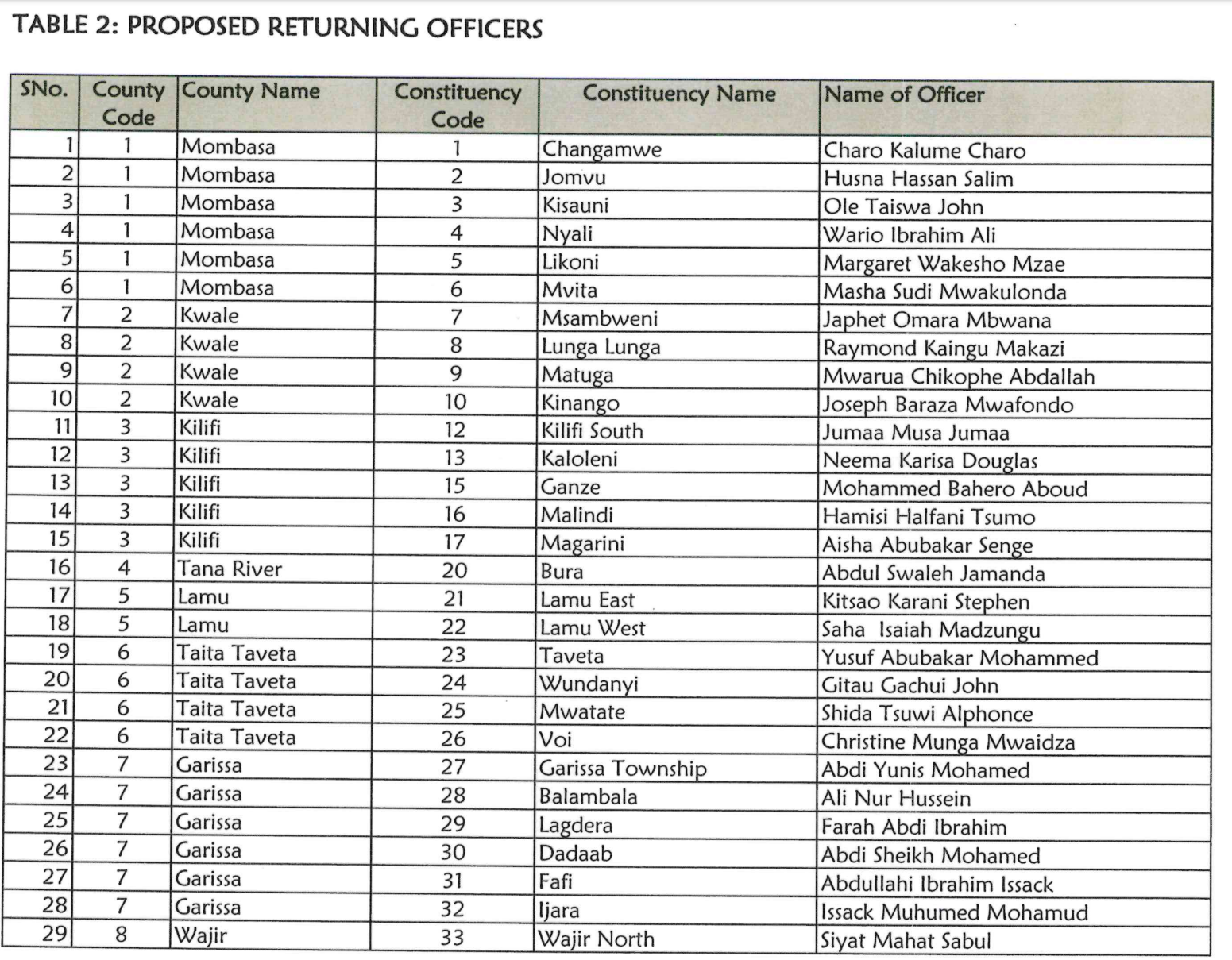 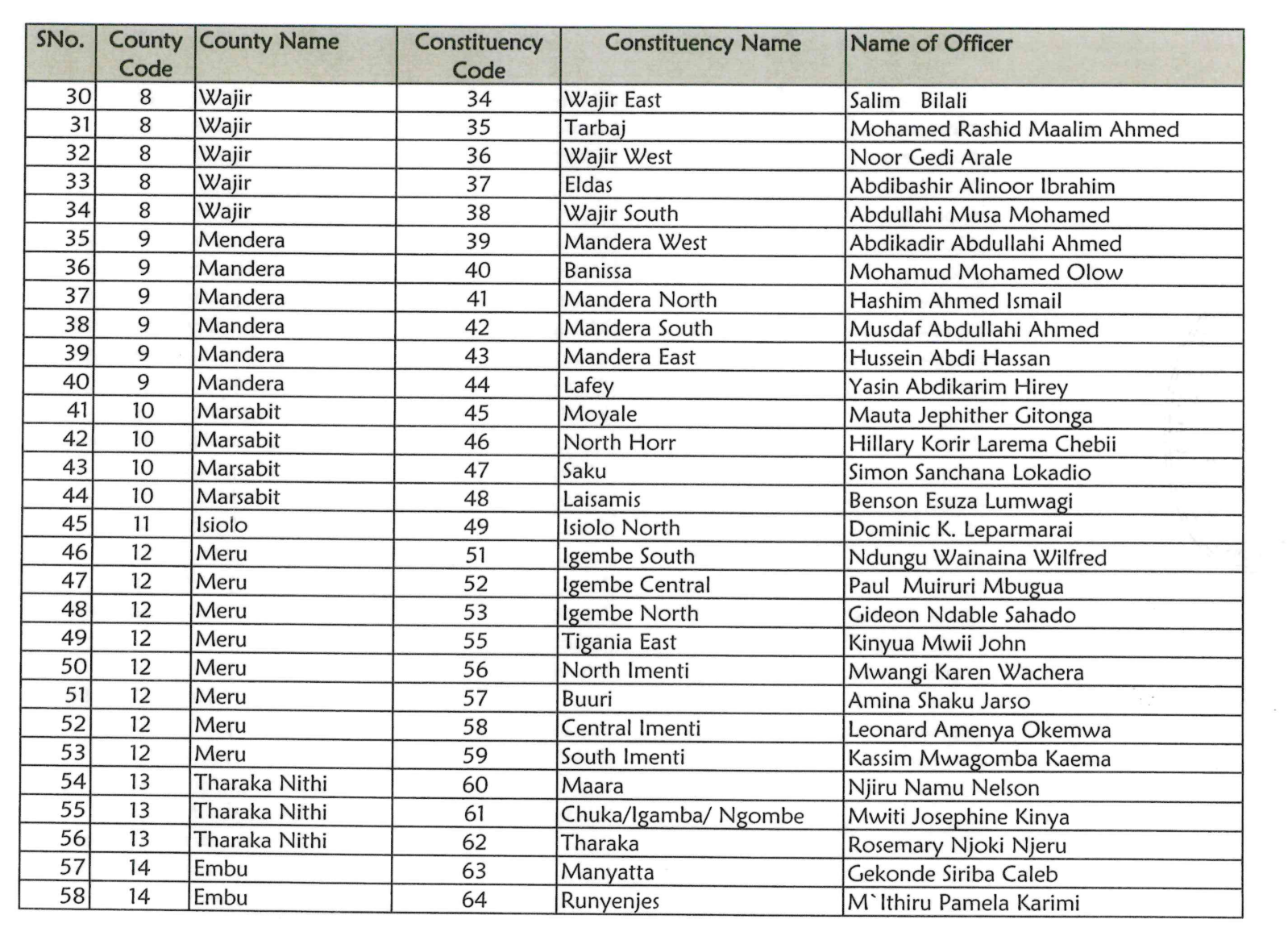 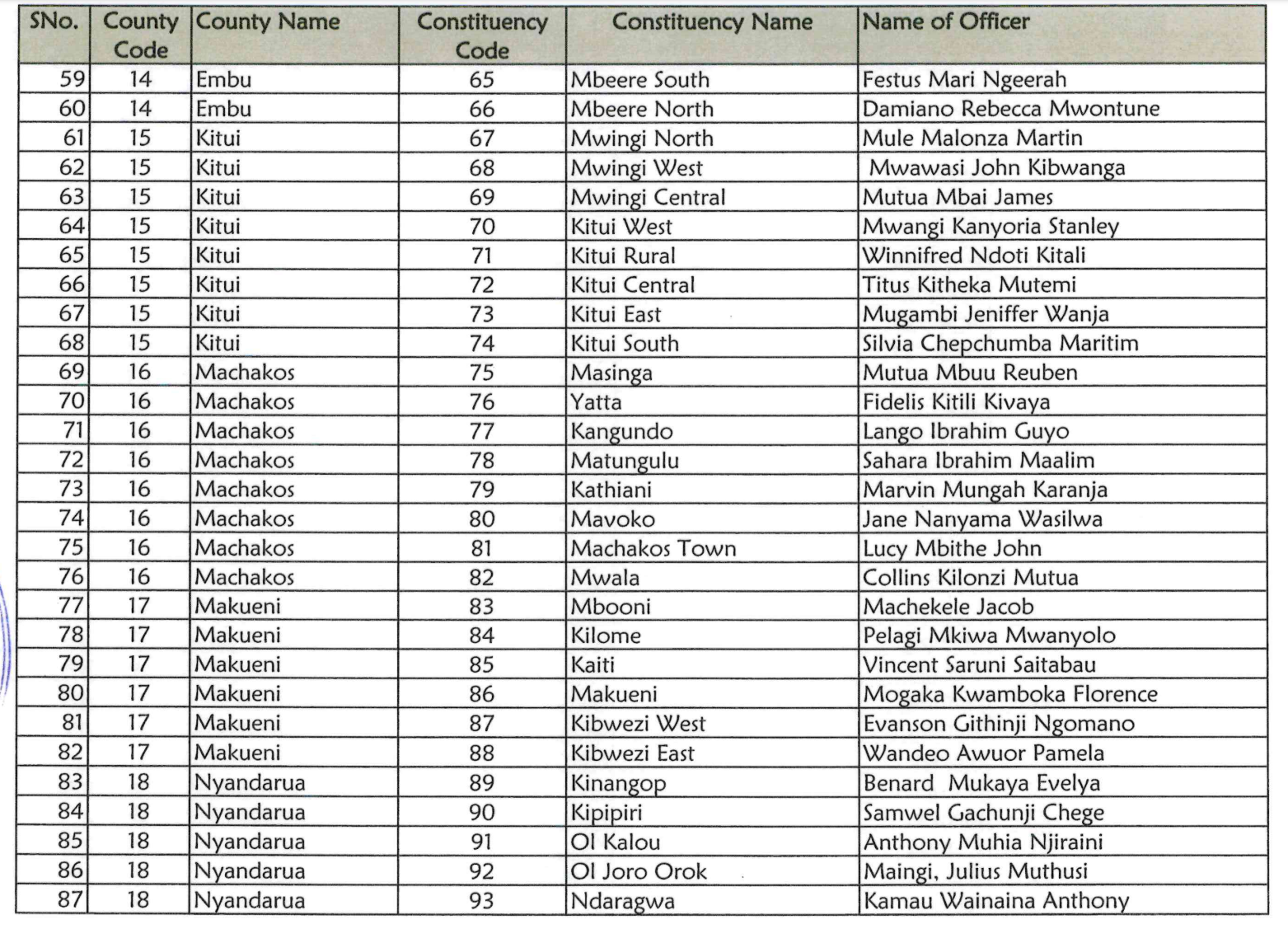 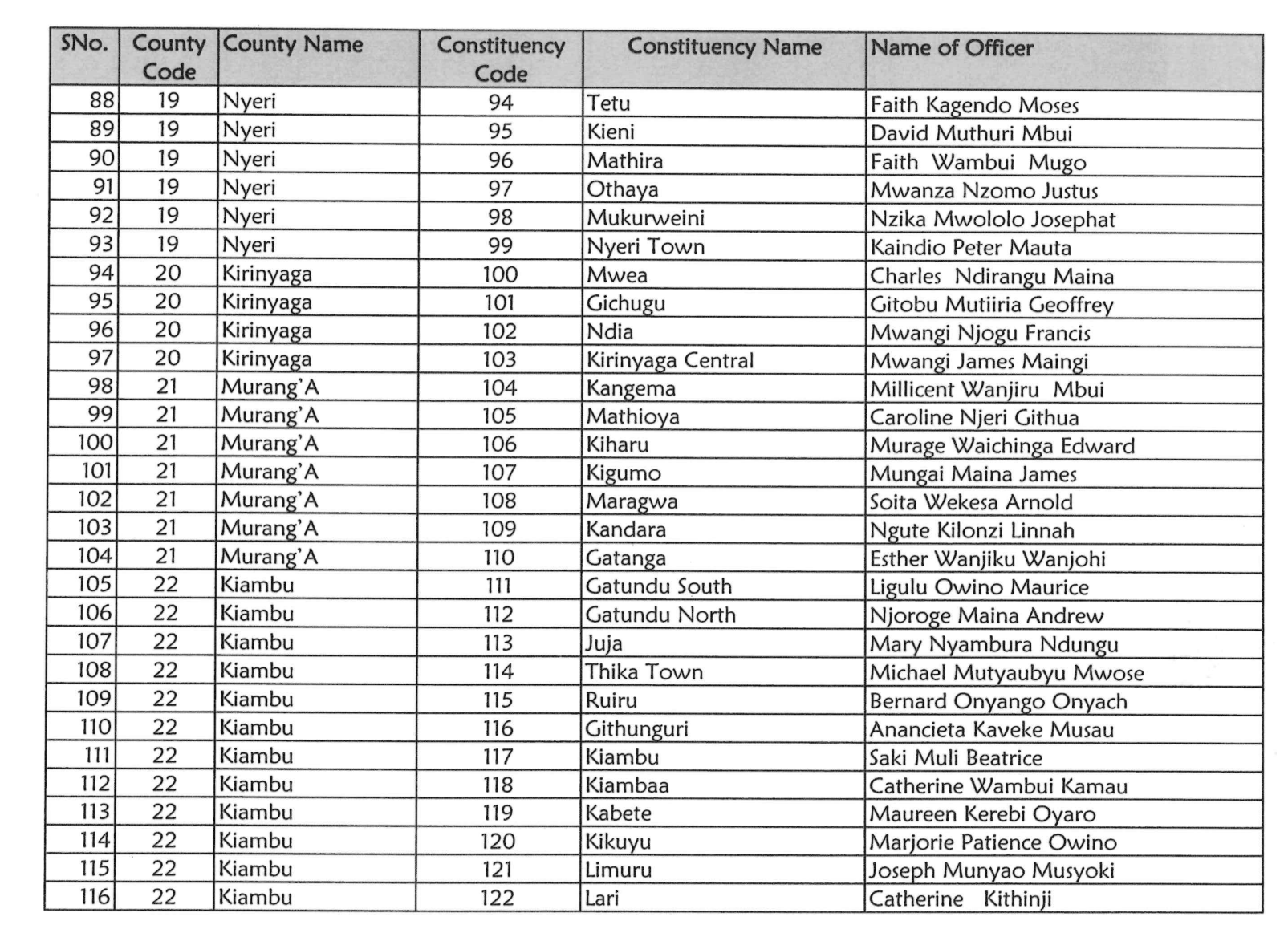 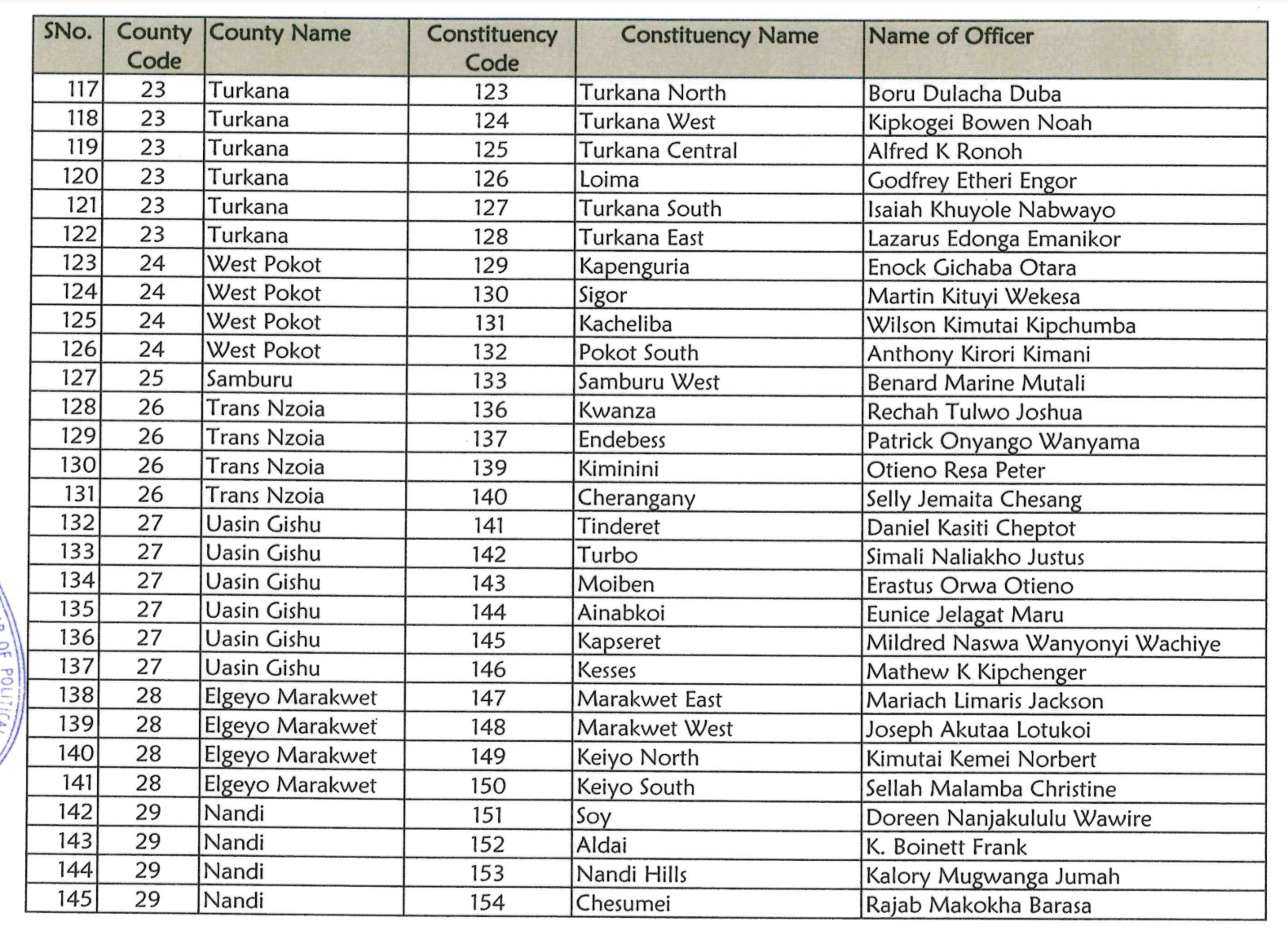 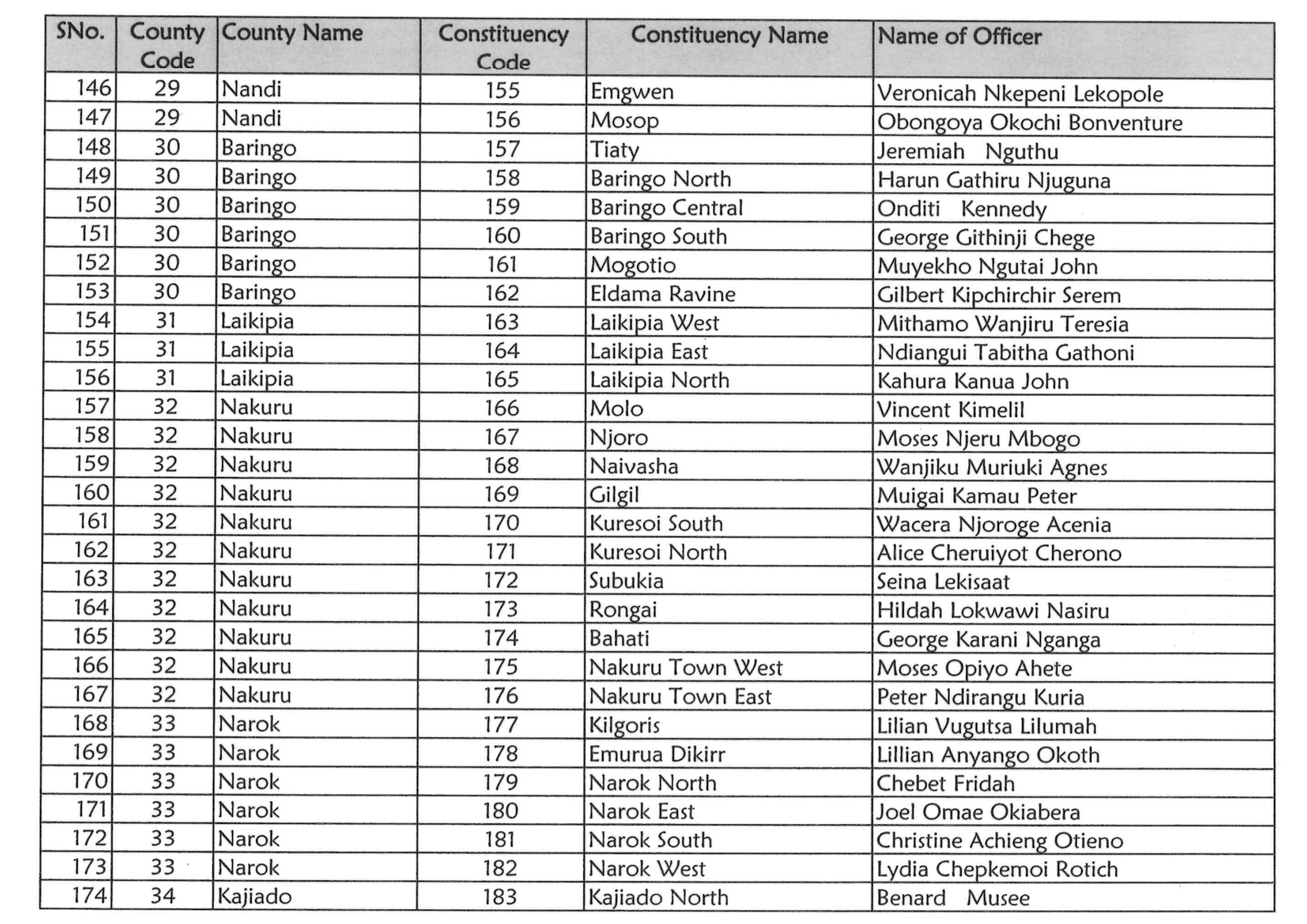 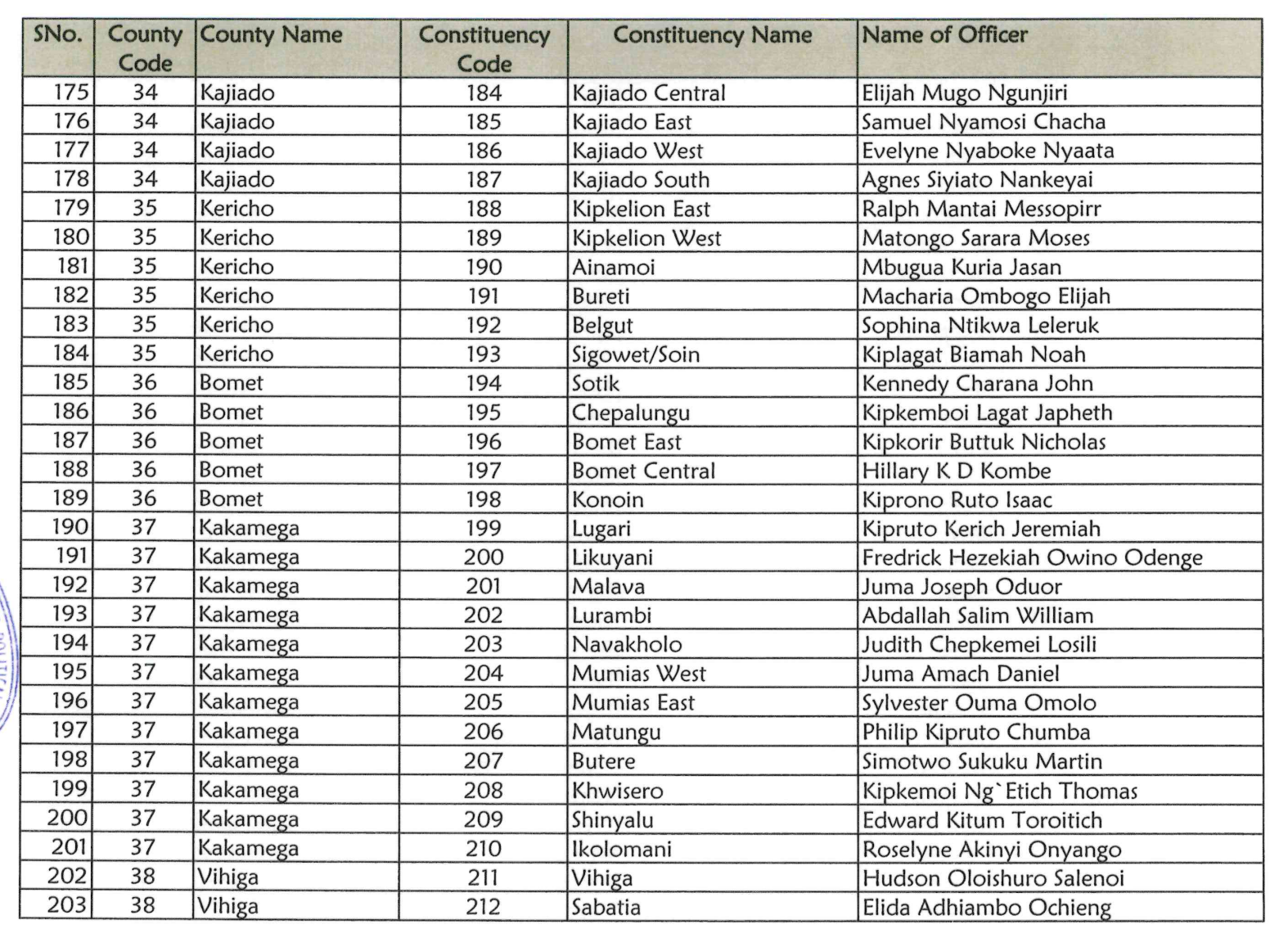 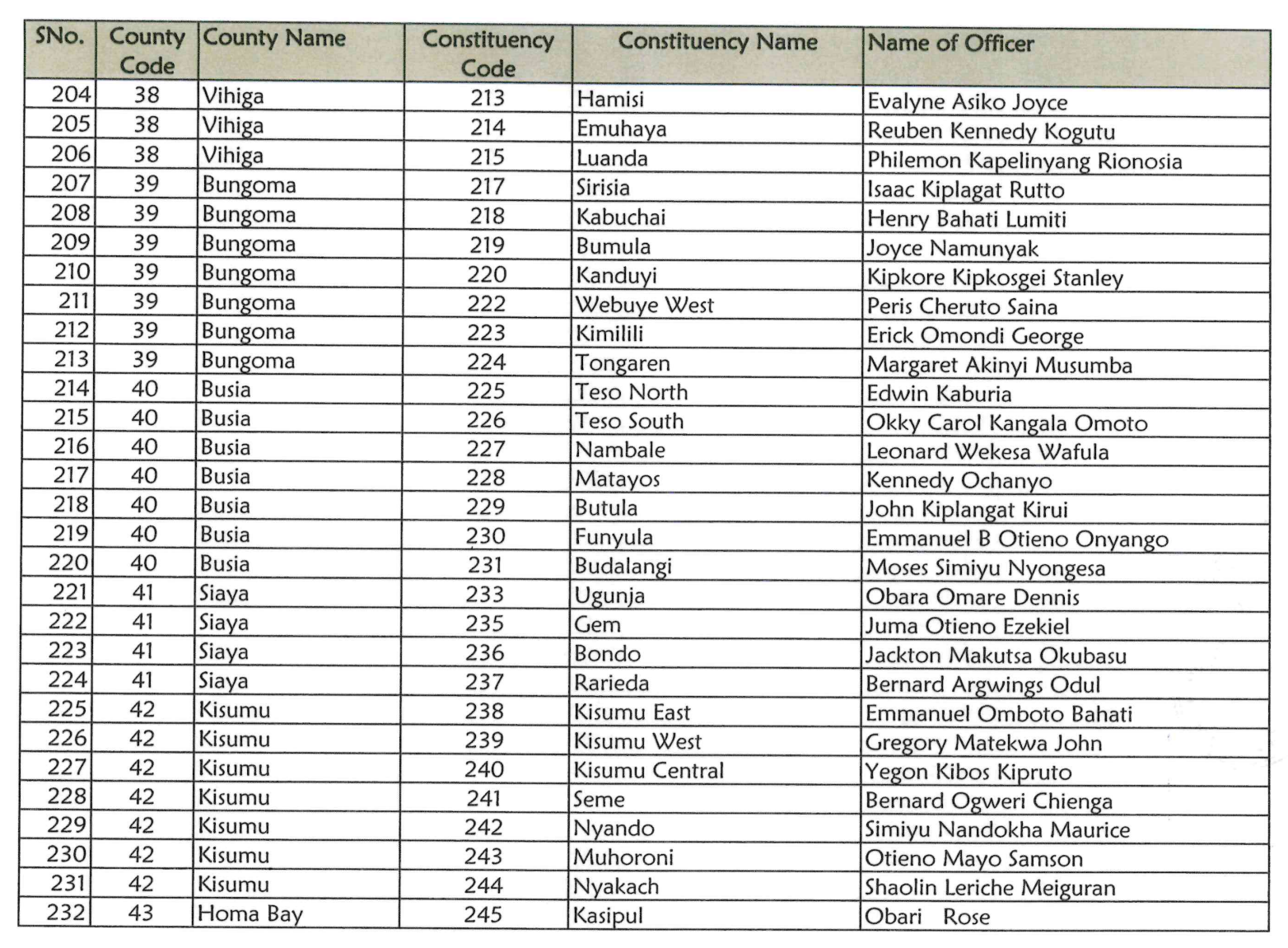 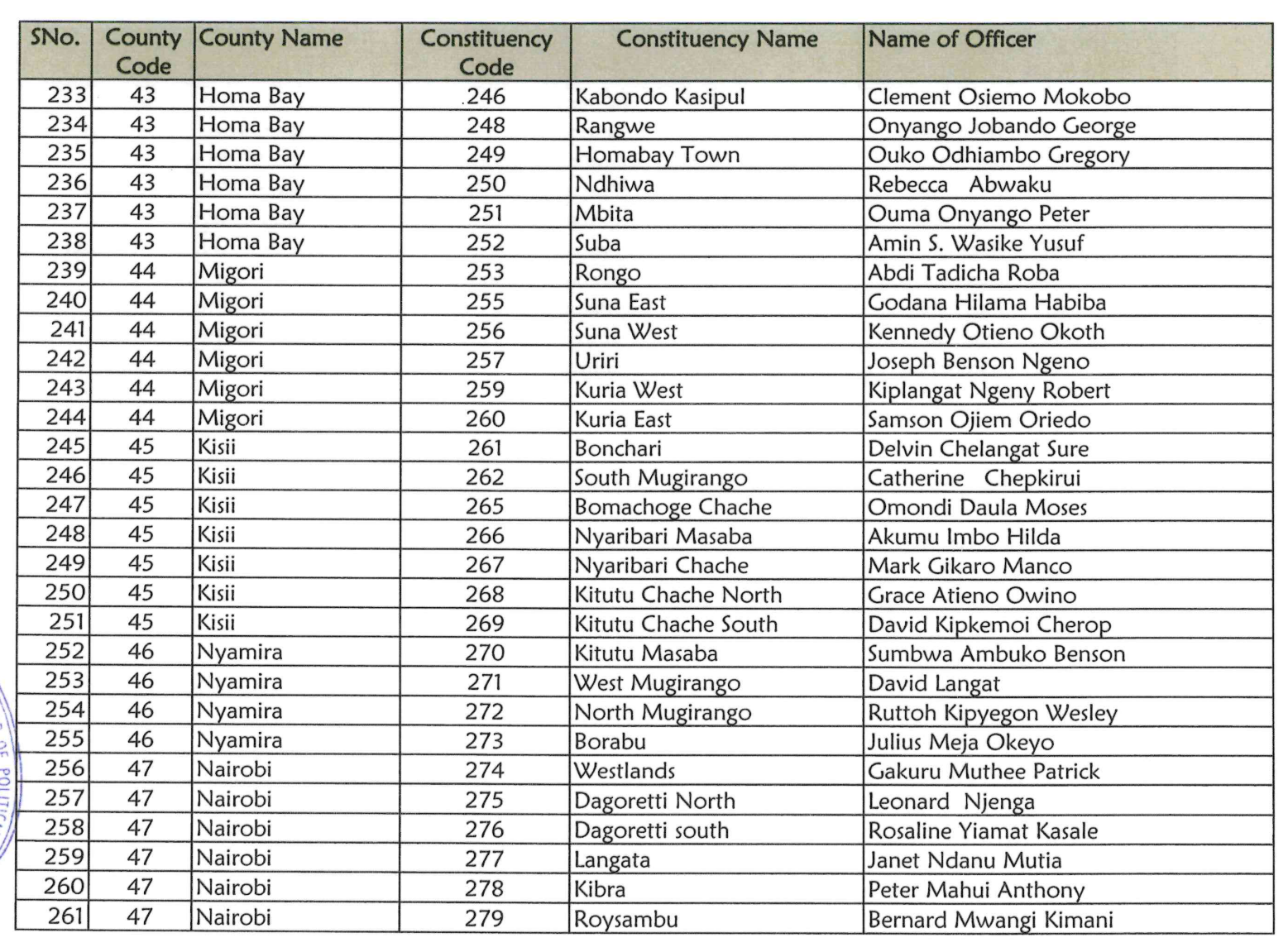 By George Maringa 30 mins ago
Lawyer Paul Gicheru is dead