Hurricane Nelson Havi: Of crickets, jurijunta and the roller coster of Gitanga Road 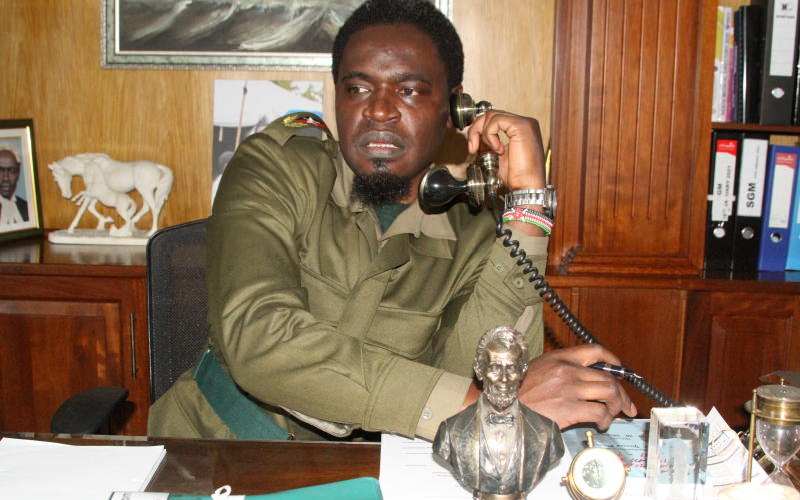 Like a confounding hurricane, Nelson Andayi Havi swooped down on Law Society of Kenya in 2020, turned it inside out in two remarkable years, and left Gitanga Road offices to whence he came from.

Everybody had seen it coming, but few imagined how eventful his tenure would be. Two years earlier, he could barely wait to vie, confronting the society’s rules which imposed 15-years of practice years as a bare minimum for seeking the coveted office.

While he did not quite succeed on that front, he scored heavy in embedding his name in the hearts and minds of young lawyers who were raring to take over the society from the old stagers.

The preceding two terms of President’s Isaac Okero (2016-2018) and Allen Gichuhi (2018-2020) had been marked by sustained Jubilee assault on basic freedoms, infiltration of key democratic and governance institutions, and general disillusionment over clawback on hard-won democratic gains.

Despite LSK’s pushback, the promise of “Okoa LSK” movement that had begun in 2015 during the tumultuous term of President Eric Mutua had not quite paid off. Besides, the members welfare issues that had triggered Okoa remained thorny, including the fate of the multibillion LSK Arbitration Centre project.

Havi himself had not been quite an Okoa LSK enthusiast. When Okoa luminary Jacqueline Manani was gliding past the main stand of an LSK meeting in 2015, stomping her feet on the carpet, and grabbing the microphone to register her opposition to the arbitration project, we never saw Havi.

When ODM Secretary General Edwin Sifuna was charging at Senior Counsel John Khaminwa on the same day, Havi was nowhere to be seen. It could as well be there he was there, but his act was not publicly captured.

Riding on the blossoming social media space, however, Havi built for himself an enviable image of a saviour, fighting established judiciary cartels, or the "jurijunta" as he called them. By the time he was campaigning in 2019, he needed little introduction.

“Thank you for entrusting me with the weighty and honorable responsibility of serving as President of the Law Society of Kenya. I will serve you diligently and gallantly,” he posted on the day he bagged the seat.

His first port of call with his Council, comprising of nine ladies and two men, was to church for dedication. In retrospect, they needed those prayers. Soon thereafter, Corona virus pandemic swept the world, delaying their assumption to office, until July 23 when they were sworn in.

But Havi had already swung into action long before that, operating from the “Command Centre”, his Westlands law firm office. His first win was the successful litigation for inclusion of lawyers in the privileged list of “essential service providers” who could move freely across the country.

The simple act restored the pride of lawyers who were being ridiculed around at the time, after being left out by the Cabinet Secretary. On July 18, a few days before the Council was sworn, Havi demanded that Chief Justice David Maraga initiates the process of dissolved Parliament over failure to enshrine the constitutionally decreed gender threshold.

Before Maraga could act, though, Havi issued the first sign of the bigger things to come. On September 19, Havi turned out in his rural "Camp David" Likuyani home, armed with a spear, draped in buffaloe skin, and colobus hide headgear, menacingly charging at the cameras.

He had just been coroneted as the leader of the Maragoli community. He claimed the elders had received “divine directions” from their ancestors to crown him. Sitting on a three legged “Omusangula” wooden stool, he swore to diligently, fearlessly and gallantly serve the people of Kenya.

Fresh from this epic feat, Havi came back in Nairobi to continue his duties at Gitanga Road. By this time Maraga had executed his constitutional mandate and advised President Uhuru Kenyatta to dissolve Parliament. Riding on the crest of his newfound resolve, Havi threatened to occupy parliament.

On the material occupation day, Havi turned out in parliament alone, his Council missing in action, and with a small band of loyalists. A picture that later emerged of him sipping tea in parliament lobby earned him the moniker “Chai Guevarra” which he later fully embraced.

By this time, it was increasingly becoming difficult to know the resolve of Havi the LSK President, and Havi the firebrand lawyer. Fissures began to emerge, and Havi began to publicly display the disunity.

The split in the Council blossomed into a full blow war, with Havi coining the term “crickets” to refer to his own Council members. In the melee that ensued, CEO Mercy Wambua, whom Havi had grown fond of calling by her three names, Mercy Kalondu Wambua, was axed.

A video emerged of a Council meeting, which afforded Kenyans a sneak preview into how Council members conducted themselves. The Council was on a free fall, and could not be saved.

Wambua fought back, supported by majority Council members. Gitanga Road offices transformed into the theatre of the absurd, and Havi rebuffed offers to reconcile with them, saying they were receiving orders from a fired CEO.

With suit and counter suits flying around, and Charles Midenga filing a motion of no confidence against Havi, the infighting raged:  “The stables must be cleaned even if it takes diverting the River to Gitanga Road.There will be a lot of wailing but it must be done," he vowed then.

"Flight Lieutenant Jerry Rawlings shot two former Presidents of Ghana and 70 Senior Military Officers and Ministers who had stolen from the people to bring Ghana to where it is now. The World wailed for a while but supported him eventually. The shooting at LSK has started,” Havi declared.

By end of 2020, the focus of the Council to deliver on its promise had completely been swamped by the infighting. It did not help that Havi was posting clips dancing to rhumba tunes, celebrating his small wins over the crickets.

On Christmas Day, Havi put a video photo of ducks quacking in his rural farm with a telling caption; “I thought I had escaped from the shouting eight. Now this!”

The year 2021 was the most defining year for Havi and his squabbling Council. A special AGM called on January19 to drain the swamp at Gitanga Road began well, except for Havi’s soprano that couldn’t be heard quite well online.

No sooner had the boat started sailing with Captain Havi on the decks than it began to sink. The conundrum on level of participation and mode of voting for virtual attendees cropped up with Council members Aluso Ingati, Caroline Mutheu and Riziki Emulule vouching for the online team.

From the look of it, Havi had planned well for this AGM. For a start, he had swamped the tent at Gitanga Road with his avowed supporters who openly declared the 9 Council members were there to be seen, not heard. And when some members moved a motion to lock out fresh motions on the floor, Havi pulled out a written ruling affirming the practice, complete with bundle of authorities.

On that day, Havi was very generous with the mic. Those who fell for it, like Nairobi Branch Chair Eric Theuri realized it too late. After a long exposition on procedural issues, Theuri thought he had convinced the meeting to take a different turn only for Havi to rule that his well-listened contribution had been overtaken by events.

A similar fate befell Tom K’opere, a senior member of the society. He vouched for the meeting to proceed from the point of law. Again when he finished, Havi read out a regulation of the society that granted the president power to stop or kick out members engaging in irrelevant, repetitive and vexatious points in a meeting.

Besides, he informed the attendees, the President held the final say on matters of procedure. It was like they had not spoken anything. When the guillotine hour came, the indicted members stood to defend themselves from what was arguably Havi’s court.

“The punishment you propose to give me is worse than capital punishment… even before you hang a dog, you give it a notice. To bar me in perpetuity means even when I go to meet my maker, and there will be a society, I will remain barred,” Bernard Ngetich wailed.

Ngetich big mistake had been to step in to lead the “crickets” in a meeting that Havi had stormed out of. For his piteous wail, Havi’s friend Silvester Mbithi successfully moved an amendment to save Ngetich from perpetual ban in Council affairs.

Ingati’s defense brought the meeting to a halt. In one instance she wanted  to read out 160 members who had made a certain application. She was booed into submission, and her second offer to have the names projected on the screen rejected by Havi.

When the going got tough, Ingati defiantly moved to sit on Havi’s files, blocking his view of the members. She later left of her own accord. Roseline Odede threw in the towel, citing “the way things are”. “I am tired. I am ready to go home. I wish to retire,” she said as Havi's camp applauded her decision.

Mutheu struggled to explain herself as members shouted on her to resign. Ndinda Kinyili demanded at least 14 days to rebut the allegations. Ms. Wambua similarly defended herself, but they were confronted at every turn by Havi's comrades who had come armed with compelling caselaw against their objections.

In the end, all their protests counted for nothing. Upon calling the vote, Havi declared the ayes had carried the day. He never even bothered to ask for the nays. Later, he would relate the episode to the trial of Nicolae Ceau?escu and his conspirators.

By the time they were protesting “who are these people”, Havi had already sworn them to office, and called for closing prayers. From then, things degenerated fast.

Amid the chaos in Gitanga Road, Havi’s team continue to score in public interest litigation; turned the tables on Kenyatta’s main project, the Building Bridges Initiative, objecting to ban on political gatherings and reversing appointment of LSK nominee in the panel for recruitment of electoral commissioners, among others.

But also Havi also begun to turn his back on his words. On January 28, a month into his election in 2020, he had given a  solemn, written undertaking that he would not affiliate himself with any political or the state. It was witnessed by advocate Isaac Rene Okumu.

On February 1, 2021, Havi turned up at the Hustler’s Mansion, leading a group of Likuyani Constituency leaders to meet Deputy President William Ruto’s wife, Rachel.A few months later, he met ANC leader Musalia Mudavadi where they deliberated “constitutional and legal matters of significance and their implications on the Kenyan people.”

Soon thereafter, Havi turned up at Africa Divine Church, Muthangari where he called on congregants to register and vote for ANC “from top to bottom”. In May, Havi officially joined ANC, received at the party by Executive Director Margaret Ndanyi.

He didnt last long in ANC for he switched loyalties to Ruto’s United Democratic Alliance (UDA), taking with him a brigade of lawyers to defend the hustler agenda.  His other campaign promise of running a united Council, headed by a strong personality with convincing power, had long dissipated in the thin air.

Havi's two years at Gitanga Road office were nothing short of a roller coaster. He took on the government and won. He charged at his Council and lost. In those tumultuous moments, everyone who challenged him became a cricket. The “Green Man” aka Duke of Soyshire aka Mr. Hav-e Hav-e was quite the phenomenon.

By Benjamin Imende 1 hr ago
Premium Ruto slams Raila backers, accuse them of blackmailing the State

By Malkhadir Muhumed 1 hr ago
Premium Wittingly or not, Raila ceded the national arena to Ruto after August 15

By Peter Muiruri 1 hr ago
Premium Dawood, surgeon who mastered the art of the scalpel and the pen
.