Where women pay for sex with strangers after husbands’ death

By Rosa Agutu | 9mos ago

It is 6am in Uyoma Kagwa, Siaya County, and Alice Atieno is preparing firewood awaiting her big day. Ms Atieno will be “cleansed” in the evening.

She is going to have sex with a stranger before she is officially inherited by an in-law.

The “cleansing” only happens when the widow agrees to have sex without protection, since the practice will be considered incomplete if their fluids do not mix during coitus.

“I don’t have a choice, I have to sleep with a stranger just to protect my children from misfortunes and even death,” says Atieno, who is in her 30s.

With the help of other women in the village, Atieno should prepare a meal for the man who is going to “cleanse” her from her dead husband’s spirit.

Atieno decided to be “cleansed” when she thought of rebuilding the house she had stayed in with her late husband.

Tradition demands that she “sleeps” with the “cleanser” in a makeshift house made of canvas for three days before officially rebuilding her house. The community is involved in rebuilding that house.

“I will prepare chicken that will be eaten by the two of us, while my children and the elders wait outside. We will take the first bite of the chicken before the people outside are allowed to eat,” Atieno says.

That evening, Atieno and the man lit a bonfire. It burnt all night, indicating that the home had a man. It is in the makeshift hut that the ritual of cleansing the widow happened.

According to Luo tradition, a widow aged below 60 must be “cleansed” then inherited. A widow aged over 60 can only be inherited if her firstborn son has not built a house known as simba. The act of being inherited is called tero. The man who inherits is called jater.

Over the years, so many professional “joter” (plural for jater) have emerged. Their job is to stay with the widow for a few days while having sex. After seven days, they leave.

James Odawa Owino, famously known as Limpopo, is a professional jater. However, to him it is no longer a ritual but more of a business. He says he has been earning a living out of it. It has benefits.

“It’s a win-win situation. I am paid to have sex with her as I deliver her from all misfortunes. I have received between Sh1,500 and Sh15,000 just to do this job. The charges depend on the financial status of the widow. But there are brokers who try to con us and not give the full amount,“ says Limpopo.

Limpopo says there are times he had to involve the elders when a widow refused to finish the stipulated seven days of cleansing.

“You know if I don’t finish the seven days that is chira (taboo) and I can die. For my safety, I had to report and she agreed,” he adds

Odhiambo (not his real name), is also a professional jater. He is HIV positive, but his status does not hinder his business because most widows he “cleanses” are of the same HIV status.

Dressed in rugged trousers and a black T-shirt that one could easily tell has not had contact with water and soap for weeks, Odhiambo, who is drunk most of the time, says when he started this occupation, the charges were very low. Sometimes the elders would dupe him because of his drunken status.

“There was a time I was promised Sh7,000. I insisted on a down-payment of Sh2,000, which they gave me. When I finished my job, they refused to give me the remainder claiming that I enjoyed the sex so there’s no need. I was angry. From then on, whenever I am needed, I ask for full payment before I offer my services,” he says.

Benson Mulemi of the Department of Social Sciences and Development Studies at the Catholic University of Eastern Africa, says widow cleansing is a funerary ritual aimed at disengaging the widow from the spiritual bond uniquely related to marriage and sexual relationship to the dead husband.

“In African cultures and other religions, sexual relationships with a spouse entails spiritual bonding that may linger after death. This bond requires the ritual to let the spirit of the departed spouse go. It is potentially dangerous to the living without a proper send-off ritual, of which cleansing is just one,” adds Mulemi.

Prof Mulemi says the shadow (tipo in Luo) of the dead is dangerous to the widow. any potential sex partner and the health of an entire lineage.

Widow cleansing is therefore one of the rites associated with funeral and mourning. It is part of the rituals of bereavement and after-death transitions whose aim is to send away the spirit of the dead.

Atieno’s brother-in-law, who asked to remain anonymous, says since her bride price was paid, she cannot leave the homestead, and so the man who will inherit her will live with her there.

“It is a way of making sure the deceased man’s lineage stays alive. The ceremony has to start at 6am and is led by the cleanser together with the widow’s first son,” says the brother-in-law.

After the cleansing, the widow will finally be inherited by an in-law or a close relative.

According to Mulemi, the role of the inheritor in the widow’s life is to be a “trustee” who takes care of the children and the property while they are minors.

He remains a father figure to the children. He gives emotional support and companionship for the widow when still sexually and reproductively active.

Mulemi says the children born from that kind of union belong to the dead man, not the inheritor.

“The children born of the fictive/symbolic/ghost marriage under the institution of ter would in principle belong to the deceased man. They would inherit his estates and not the inheritor’s,” he says.

This practice is being frowned upon and embraced in equal measure by modern-day Luo women living in urban centres.

Millie Achieng’, a 31-year-old journalist, says she does not mind being cleansed and inherited if she loses her husband since she will need help to take care of her children.

She says she also needs companionship. Agnes Awiti, 28, says she is only against the cleansing, but would not mind re-marrying.

Rosemary Akinyi, a 40-year-old financial advisor, however, says the tradition should be abolished.

Mulemi says the culture should not be frowned upon but embraced in its consideration for socio-spiritual and psychological wellbeing.

He says it should be optional, as there are women and men who would not mind the tradition for its positive contribution to individual and societal wellbeing.

“Or it could be “modernised” as institutionalised support for widows, as long as it is based on consent of the widow and within a reasonable degree of safeguarding widows’ rights,” he says.

Mulemi says the practice can be modernised by excluding the sex rituals and just having the man as a male figure in the family. “He becomes a representative of the family. He will not even be obligated to have children with the widow, but just social support,” he says.

The former lecturer adds that the practice can also be modernised by allowing a legal marriage, because matters culture are subject to abuse if laws are not respected.

He, however, says if a widow is allowed to choose an inheritor, she might end up choosing a way younger brother or cousin of the deceased husband, and go against all the rules. 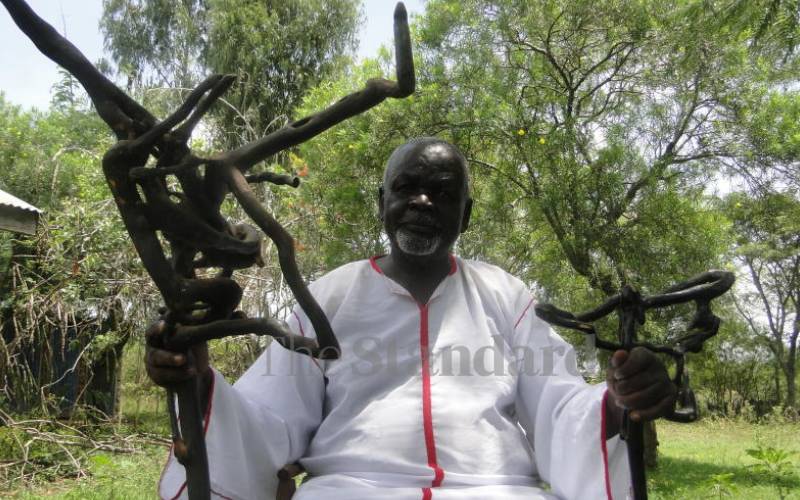 Premium Luo elder explains the concept of wife inheritance
Once they settled on the best candidate, he would hang his coat in the widow’s house as a symbol that he was the new man in charge.
Nyanza
By Isaiah Gwengi By Isaiah Gwengi
9 months ago
.

Premium Stone pillar with a rich history of World War II
Central
By Ndung’u Gachane
3 hrs ago
Messi, Argentina beat Netherlands on penalties at World Cup
Football
By Associated Press
4 hrs ago
Premium How Kenya can get its syllabus back on track, avoid CBC hitches
Education
By Elisheba Kiru and Brenda Wawire
4 hrs ago
We need to be serious with public safety, law and order
Houghton Irungu
By Irungu Houghton
4 hrs ago
.