Sharon Otieno murder: Officers, doctor testify how they saved man abducted with her

By Paul Ogemba | 7mos ago

Two police officers have narrated how they rescued a man who jumped from a moving vehicle to escape kidnappers who had abducted him and Migori Governor Okoth Obado’s slain girlfriend Sharon Otieno.

Tuwai Birgen and Roymel Lesimen took to the witness box to give events of what happened on the night of September 3, 2018. This is the day Sharon and her seven-month unborn baby were murdered in a forest in Oyugis, Homa Bay County.

“We were informed that there was an emergency of someone who had been abducted but managed to escape. We immediately armed ourselves and proceeded to Kadel Police Post where the said person had gone to report the incident,” said Birgen.

The two officers were testifying in the case in which Obado, his assistant Michael Oyamo and former Migori County Clerk Caspal Obiero are facing trial for the murder of Sharon and her seven-month unborn baby.

At the time of her death, Sharon was a student at Rongo University. DNA analysis presented to court showed Obado was the biological father of her murdered child.

Birgen and Lesiman, who are stationed at the Kendu Bay Police Station, testified that on the night of September 3 2018, they were summoned to report to the office where they were informed of an emergency. From the station, they proceeded to Kadel Police Post which is about 10 kilometres from Kendu Bay town and found the man who had been abducted and identified as XYZ because he is a protected witness.

“We found them standing outside the police post where the OCS went and interrogated him. We then picked him and proceeded to Kendu Bay Hospital to seek treatment. I only asked the man his name and where he worked but did not ask details of the incident,” said Birgen.

Asked whether they knew what happened to the man while he was in the car he had jumped from, Birgen told the court he did not know details of the events and that he did not hear him talk about Sharon being strangled by the abductors.

Lesimen added that once the man was treated and discharged, they took him back to Kendu Bay Police Station and the matter handed over to criminal investigation officers.

Their testimonies were corroborated by Dr Harun Diero who treated the man at the Kendu Bay hospital.

“The officers brought the patient and when I interrogated him, he said he had been abducted with a female companion but that he managed to jump out of a moving vehicle. I started medical examination and gave him some injections,” said Diero.

Asked whether the injuries sustained could have been possible if the person jumped from a vehicle moving at high speed, Dr Diero said he could not tell because the man only had soft tissue injuries.

The three witnesses testified when the murder case resumed in the open court after the court finished hearings of protected witnesses. The hearing will resume on March 7. 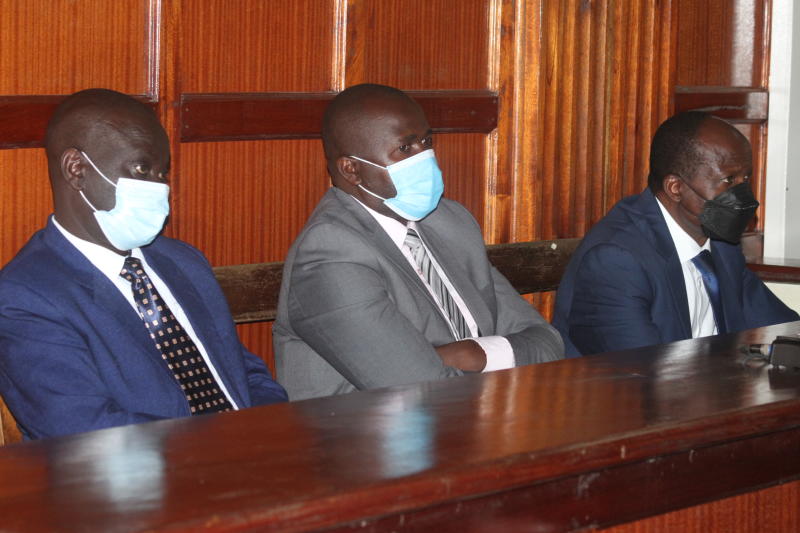 Premium Officer paints gory picture of Sharon Otieno’s murder scene
A police officer has described the gory state of murdered girlfriend of Migori Governor Okoth Obado when her body was discovered in a forest.
National
By Paul Ogemba
6 months ago
.