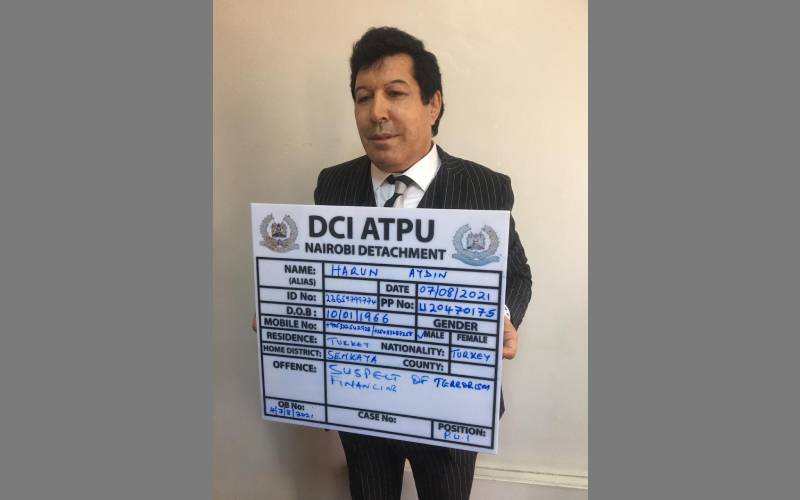 Senior lawyer Ahmednasir Abdullahi and his team were at Kahawa law courts ahead of Aydin’s case.

Other lawyers who were to represent Aydin were Cohen Amanya and Hillary Sigei, who said he boarded Turkish Airlines and was expected to land in Turkey shortly.

Aydin was linked to Deputy President William Ruto's aborted trip to Uganda and was to be arraigned today.

Equity on alleged Sh15b loan to Harun Aydin: We don’t know him

Police were said to have been investigating claims that the businessman might be a terror activities’ financier.

Sudi said since Aydin was arrested he has not been allowed to receive visitors.

"It's all politics. We expected that he would be deported and we have confirmed it," he said.

Senior Counsel Abdullahi said it is wrong to use the criminal justice system to settle political scores.

"We were ready but this was political. The government knew he is not committed to criminal activities," he added.

DP Ruto on his Twitter, said Aydin is a victim of “top-down arrogance bred by patronage and cartels that criminalise enterprise”.

He went on, “ … investor with valid papers labelled terrorist. Tragedy of political pettiness.”

Aydin was stopped from continuing with his journey upon arriving in Kenya, from Uganda, via Wilson Airport on August 7.

Elgeyo Marakwet Senator Kipchumba Murkomen said the government detained Aydin to save face for “blocking Ruto’s trip to Uganda without any justifiable reason”.

“Harun Aydin is an investor recognised by the Government of Kenya, and [was] issued with a valid class G permit. The only reason he has been arrested is because the authorities are embarrassed after blocking DP from going to Uganda, and they want to continue the pettiness they have displayed for four years,” he said on Twitter.

Ruto was on Monday evening blocked at the airport from travelling to Uganda.

The DP’s Communication Secretary David Mugonyi said Ruto and his team had arrived at Wilson Airport ready for the trip but were advised to seek clearance from the Head of Public Service and Secretary to the Cabinet Joseph Kinyua.

Players in the public transport sector have welcomed the new directive to allow them to self-regulate and carry full capacity starting today.

The damselflies are listed as Critically Endangered by the International Union of Conservation and Nature.

Prof Davy Koech: Sleeping hungry, studying in a rural school and ending up in Harvard

By Julius Chepkwony | 21 hours ago