NHIF incurs losses as half of registered members are dormant 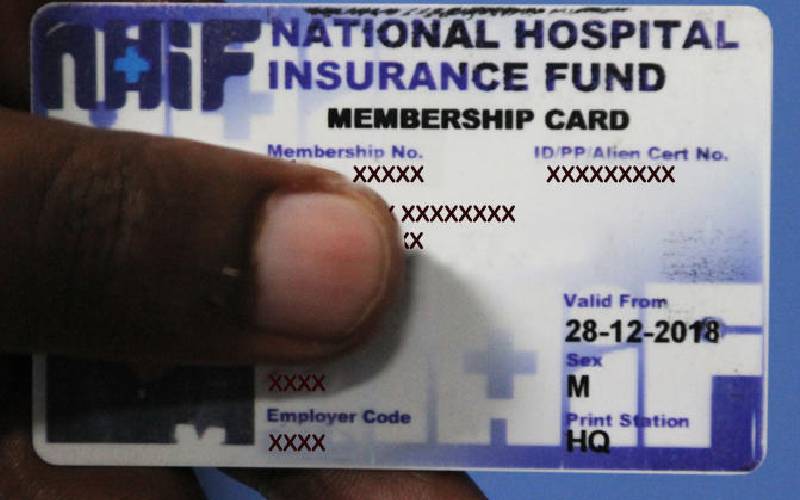 The National Hospital Insurance Fund (NHIF) is incurring losses as most members accounts are dormant.

NHIF chairman Lewis Nguyai said the dormant accounts are a big issue as “we are falling short of funds.”

He explained that for every shilling received by a member, the insurer pays Sh2 per claim, hence the need for individuals to activate their accounts.

“People should know that having an NHIF card will come in handy someday. It’s just Sh500 per month and sh 17 per day and the benefits are massive,” he said.

“Going to a hospital without the insurance you will end up paying so much money,” he added.

Nguyai was speaking yesterday during the signing of the memorandum of understanding with the Bodaboda Safety Association of Kenya (BAK) for universal health coverage of riders.

He said NHIF has embarked on a drive that targets to register more people in the “quest to fulfill the Big Four Agenda laid out by the President.”

The NHIF chairman assured that the government will cater for the first one million members that cannot contribute the monthly charges and urged the public to join hands and help the remaining 4.1 people to get covered as most come from vulnerable families.

“Kenyans can come together and support the remaining families. And this has already started to be witnessed through various counties. Let us take up that position and adopt a village, a family, or a slum as we support the efforts of the Government,” he said.

Nguyai said so far this year there have been 19 reported fraudulent cases involving impersonation of beneficiaries and the matters are already in court.

The insurance scheme plans to roll out mass biometric registration as it migrates from the use of NHIF card and national identity card as the mode of identification— which have loopholes that are an avenue for fraudulent claims.

The biometric registration will run together with the installation of an electronic claims system as NHIF moves to eliminate manual processing of hospital bills. Hospitals have up to July 11 to switch to an e-claim processing system and NHIF members will need to be registered under biometrics to access their cover.

“The biometric exercise will help us tame these individuals and deal with fraudulent cases once and for all. We now have a department that deals with compliance and enforcement to ensure that we pay for what is valued,” he said.

He said that they will soon fully launch the e-claim system to help fight the manufacturing of claims by some institutions.

The system has already been deployed to hospitals in Western, Nyanza, Central, Coast, parts of Nairobi, Eastern and, Rift Valley.

Peace, love and unity ...
Cartoons
By Gado
17 mins ago
Athletics Kenya reiterates commitment to nurture sprinters
Athletics
By Rodgers Eshitemi
31 mins ago
Women hit more by climate risk than men
News
By The Conversation
46 mins ago
Didmus Barasa surrenders after two days on the run
Western
By Mate Tongola
1 hr ago
.

By Fred Kagonye 11 hrs ago
Raila, Ruto votes in the 6 constituencies announced by Chebukati