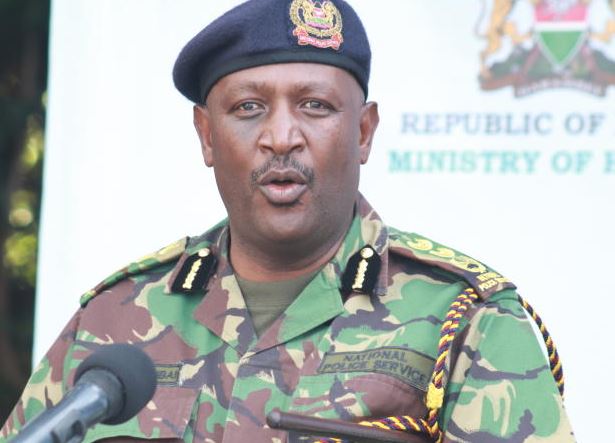 Security agencies have stepped up security around installations likely to be targets of attacks by militants who have surged their activities in northeastern region.

Al-Shabaab claimed responsibility for the incident.

Security agencies say they have been working round the clock to disrupt plans by the terrorists to launch similar attacks.

In the past weeks, multi-agency teams have been working in parts of Coast and northern Kenya disrupting the plans. In the process, dozens of suspected terrorists were arrested and interrogated.

Inspector-General of Police Hilary Mutyambai (pictured) called on the public to sustain vigilance, adding security agencies are doing their work.

Mutyambai said they have increased border surveillance to ensure that criminal elements are cut from entering the country.

“We wish to caution the public to be extra vigilant even as the police and other security agencies continue to work round the clock to ensure the safety and security of our country and Kenyans at large,” Mutyambai said.

He said the police have stepped up security around vital installations likely to be targets of attacks by militants who have surged their activities in Kenya, especially in the northeastern region.

Mutyambai said ongoing multi-agency terror operations had a great impact in the last few years. He noted that large-scale terror attacks had not been witnessed of late, and that the Al-Shabaab was instead focusing on sporadic operations in areas along the Kenya-Somalia border.

The National Counter Terrorism Centre is at the centre of the implementation of the policy by enlisting and sustaining the support of different government ministries, departments and agencies in the fight against terrorism.

The critical pillars that the centre has been instrumental in include de-radicalisation of those that have disengaged from terrorism or violent extremist groups as well as reintegration of such persons into the society. Several counties now have county level action plans to bolster the national action plans.

The military, National Intelligence Service, police, courts and office of the Director of Public Prosecutions are involved in multi-agency operations.

More than a dozen suspects were arrested for their role in the attack. Three of them were in court last week for their sentencing, but it was pushed to October 5. The suspects, Mohammed Ahmed Abdi, Liban Abdullahi and Hussein Hassan Mustafa, are charged with supporting a terror group and being in the country illegally.

The gunmen are believed to have died when the Kenyan army retook the mall. Abdullahi, Mustafa and Abdi were arrested in the weeks following the attack.

Prosecutors spent more than five years gathering evidence with more than 145 witnesses being called to give evidence.

Earth is losing ice faster today than in the mid-1990s, study suggests