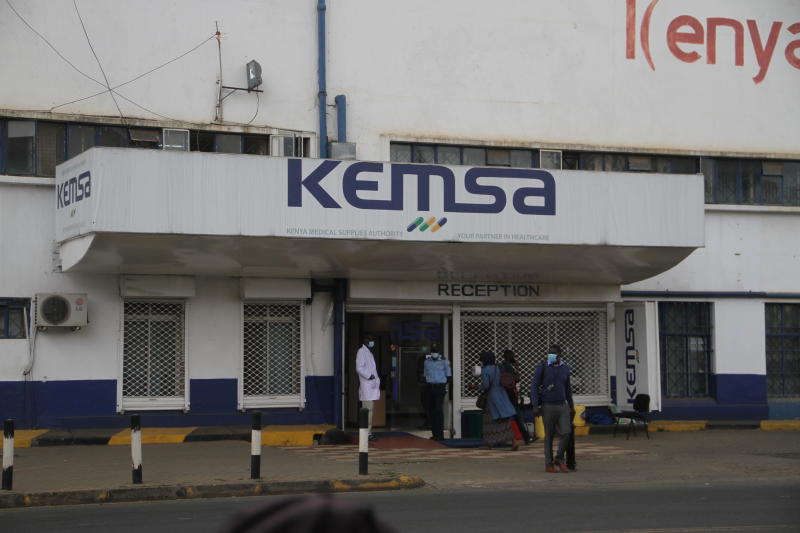 According reports, all gates had been locked and no staff was allowed to leave the premise. Visitors from outside were also not barred from accessing the offices.

The EACC officers are said to be collecting computers and other documents that may link the Agency to the corruption allegations levelled against it.

Kemsa, in a statement confirmed the raid, saying the EACC officers took possession of certain documents, electronic data and computers that will assist in their ongoing probe

“Kemsa remains committed to offering reliable, quality and affordable Health Products and Technology (HTPs) to all Kenyans even as these investigations go on,” Kemsa stated.

The anti-graft agency had earlier on promised that there will be no sacred cow spared in the investigation of the multi-billion shilling Covid-19 tender scandal at the agency.

Kemsa is accused of bungling a Sh7.7 billion tender for the emergency procurement of Covid-19 Personal Protective Equipment (PPE) that was to be delivered by July 22, 2020.

The public has strongly agitated for arrests of individuals involved after a media report highlighted suspected cases of procurement irregularities at the supplies agency.

The commission had instructed Kemsa to suspend three officials to "allow for expeditious investigations".

The three are chief executive officer Jonah Manjari, Eliud Muriithi (commercial director) and Charles Juma (procurement director). They have since stepped aside.

Yesterday, the Kemsa board was grilled over their handling of procurement of drugs and other goods meant to address the Covid-19 pandemic.

The board, led by the chairman Kembi Gitura, was grilled at the Commission headquarters in Nairobi for over seven hours over unprocedural tenders worth billions.

Others who have been grilled by the commission include; former Gatanga MP David Murathe and former Karachuonyo MP James Rege.

EACC has at least a week to make a preliminary report on the saga. Parliament is conducting a parallel probe into the issue, while officials from the office of the Auditor General had camped at Kemsa offices for an audit last week.