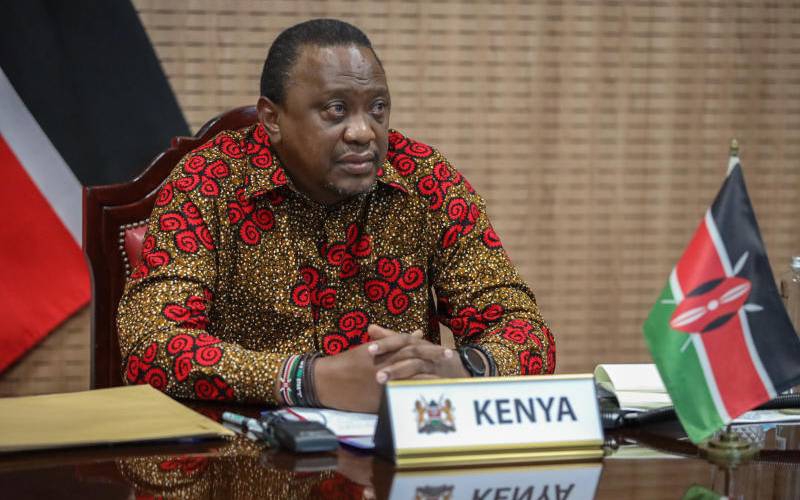 President Uhuru Kenyatta (pictured above) has recalled four changes he made at the ministries of health and industrialisation barely an hour after sending a press statement to newsrooms communicating the reshufflings.

A statement by the State House Spokesperson Kanze Dena-Mararo recalling the changes on Wednesday evening reads in part: “We would like to retract an earlier communication on the management changes at the Ministry of Health and that of Industrialisation, Trade and Enterprise Development. Fresh communication on the subject matter will be issued in due course.”

In a press release issued earlier, the president had ordered that the changes would take effect immediately.

This comes after he issued a directive to the Ethics and Anti-Corruption Commission (EACC) to expedite the investigations on the alleged theft of Covid-19 funds at the Kenya Medical Supplies Agency (Kemsa). President Uhuru was speaking during the 11th presidential address to the nation over Covid-19 intervention.

“In line with our stated public policy on Zero Tolerance to Corruption, all persons found to be prima facie culpable as a result of those investigations should be brought to book, notwithstanding the public office they hold, or their political or social status,” he asserted.

The Ministry of Health cracked the whip by suspending three top Kemsa managers on August 14 as probe into claims of impropriety in the acquisition of Covid-19 equipment began.

Chief Executive Officer Jonah Manjari, Procurement Director Charles Juma and his Commercial counterpart Eliud Muriithi are currently being investigated in relation to among others, controversial Sh7.7 billion tender for the emergency procurement of Covid-19 Personal Protective Equipment (PPE) that was to be delivered by July 22, 2020.

The agency has been the talk of town turning into a political cannon fodder as political leaders trade barbs on social media over who should take responsibility for the plunder. EACC is also investigating the construction of a warehouse by Kemsa at Sh5 billion.