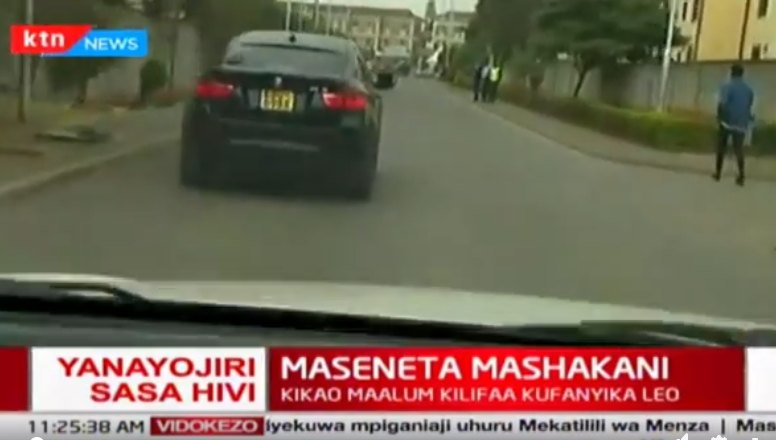 In a bid to capture the action as it was happening journalists from various media houses embarked on a car chase on Monday as Bomet Senator Christopher Langat was being ferried to an unknown destination.

The 20-minute chase saw a black Subaru Forester ferrying the senator under number plate KCC 686A. Following was a Ford Police pick-up registration KCG 067L with an insurer sticker that read GKB 257J .

However, the Subaru driver dived into Manyani East road after successfully overcoming the building traffic leaving the journalists chasing a lost trail.

According to Elgeyo Marakwet Senator, Kipchumba Murkomen, inside the Ford vehicle, there was an officer who identified himself as Lawrence Mwengi Mulatya an Investigating Officer from DCIO Bomet.

Bomet Senator Christopher Langat and his Samburu counterpart Steve Lelegwe were arrested earlier today by officers from the Directorate of Criminal Investigations (DCI) after a dramatic wait at their homes.

Langat surrendered and was arrested at his Nyayo Estate home in Nairobi before being taken away with his lawyer and Law Society of Kenya President Nelson Havi.

Sources speaking to Standard indicate that the Bomet senator was driven to Bomet for grilling.
Police say they are investigating claims of incitement to violence by the leaders and hence they need to talk to the two leaders. It is not clear when the said crimes were committed and if it is true. Police said they “wanted some clarifications from them”.