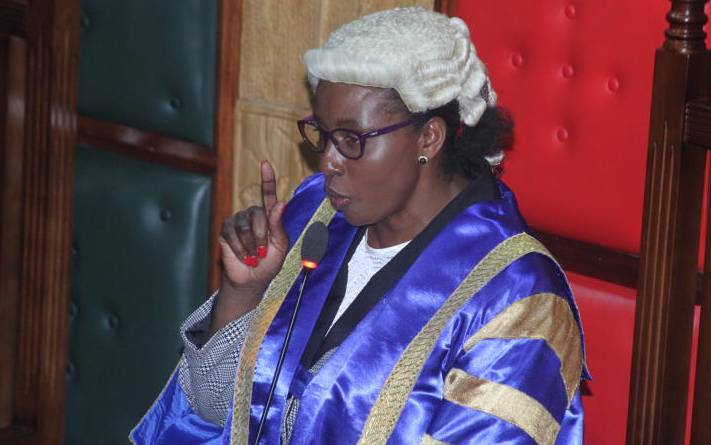 Several hurdles lie in the way of fresh efforts to kick out Nairobi County Assembly Speaker Beatrice Elachi (pictured above) by ward representatives.

Waithera Chege, the mover of the impeachment motion, claims she has already got 77 signatures.

One, Elachi and her deputy John Kamangu are on the chopping block, and the Speaker’s panel was earlier this year disbanded.

Both have been accused of abuse of office, illegal appointment of a new assembly clerk, corruption, poor leadership, victimisation of MCAs and assembly staff, impunity, disregard of the law and county orders, and militarisation of the assembly.

Then there is the tale of two clerks and the creation of two new deputy clerk positions.

For an impeachment motion to be tabled, the assembly must be in session. Last week, Elachi suspended plenary sittings to September, just a day after her office was notified of the impeachment motion against her and after the courts issued an order halting the appointment of Edward Gichana as the new assembly clerk.

In a notice, the embattled Speaker said the “current environment at the assembly cannot allow for virtual sittings”, citing attempts by some ward representatives and “goons” to disrupt the sittings.

Waithera, the South B MCA, has, however, said the impeachment motion would go on. She said Elachi had no powers to suspend the House since she is suspended from her duties.

According to section 11(6) of the County Governments (Amendment) Act, 2020, the Speaker shall not perform any of the functions of the Office of the Speaker pending the resolution of the county assembly.

“We are proceeding with the impeachment. The House has not adjourned. Only members can adjourn it, not the Speaker. The House calendar has to be followed and as far as we are concerned, we are still in session,” said Waithera, adding that the House is supposed to go on recess on August 13.

But Elachi maintained that she invoked Assembly Standing Order No 1, which gives her the liberty to adjourn the House in special circumstances.

For the motion to proceed, the clerk of the county assembly must first verify signatures collected and ascertain they meet the required threshold of 42 signatures for a notice of impeachment motion to be tabled before the assembly.

The problem is there are two clerks - Jacob Ngwele and Edward Gichana - who have both been suspended from performing their duties by court order pending determination of a case before the Employment Labour and Relations court.

Akuku has maintained that her office has never received any notice of motion for the removal of Elachi.

She also claims the notice of impeachment motion letter containing the grounds of Elachi’s dismissal by Ngwele was written on letterheads phased out by the assembly following increased incidents of falsification of assembly documents, thus it borders on forgery.

“I wish to clarify that you (Speaker) ignore any media reports suggesting that a notice of motion for your removal from office was issued and that you are curtailed from performing the functions of your office. You should treat such information as rumours, gossip and media hype and continue executing your functions unhindered,” Akuku said in a letter to Elachi yesterday.

The final hurdle for the pro-impeachment MCAs is who will chair the impeachment sessions.

According to the County Government’s Act, once notified of the ouster motion, the Speaker should step aside pending the resolution of the county assembly and the Deputy Speaker takes over.

Waithaka Ward MCA Anthony Kiragu, however, says that the MCAs will appoint an acting Speaker until the ouster motion is concluded.

Elachi has denied receiving any notice of impeachment motion and said that a temporary Speaker cannot be appointed when both the speaker and the deputy are still there.