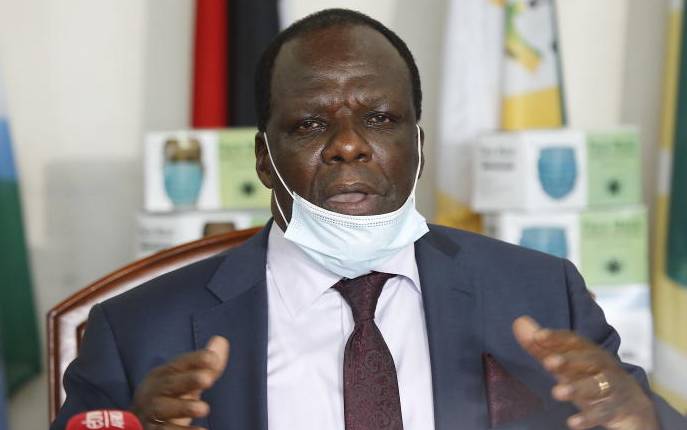 Council of Governors (CoG) chairman Wycliffe Oparanya (pictured above) found himself on the receiving end after county bosses questioned his leadership in the wake of a revenue standoff in the Senate.

During a virtual meeting of the council from CoG offices at Nairobi’s Delta House yesterday, a number of governors called for the return of travel restrictions in and out of Nairobi, saying the city had become the epicentre of the Covid-19 pandemic.

Sources privy to goings-on at the meeting also said some governors whose counties are bound to be hardest hit should Senate adopt the formula proposed by Commission on Revenue Allocation (CRA) put Oparanya on the defensive.

The Standard has reliably learnt that Mandera Governor Mr Ali Roba requested Oparanya to drop the revenue sharing agenda from yesterday’s meeting, arguing that Senate was already addressing the matter.

Roba’s sentiments are reported to have drawn support from the majority of governors, who accused the council’s leadership of failing to take a position on the matter early enough.

“What will we do as a council, go to court? We should have acted in good time,” Kitui Governor Charity Ngilu is reported to have told the meeting.

The county bosses appeared deeply divided on the matter, prompting Oparanya to shelve the discussion.

Oparanya’s proposal to host a virtual devolution conference was also shot down by his colleagues.

“Why would you address the State of Devolution when County Allocation of Revenue Act (CARA) has not been passed and there is a stalemate in the Senate, which will impact running of devolved projects?” one governor posed.

The meeting was further ruffled by the introduction of the Covid-19 pandemic matter under the Any Other Business (AOB) part of the agenda, ahead of their Monday virtual meeting with President Uhuru Kenyatta.

The governors complained that Sh30 billion meant for June had not been released to counties, making Covid-19 interventions difficult.

The governors claimed Personal Protective Equipment promised by the Health ministry had not reached counties. They told their chair that he could not lead Monday’s meeting with Uhuru before the council took a position on the pandemic.

Oparanya defended himself, saying the governors were not expected to have a position on the pandemic.

Governors Mr Kiraitu Murungi (Meru), Mr James Nyoro (Kiambu) and Mr Mutahi Kahiga (Nyeri) called for the return of the lockdown on Nairobi, arguing the city was the epicentre of the pandemic.

Kahiga claimed Nyeri was registering 53 patients daily since the lockdown was eased.

Governors Prof Anyang’ Nyong’o (Kisumu) and Wycliffe Wangamati (Bungoma) argued that another lockdown must be backed by scientific facts.

Makueni’s Prof Kivutha Kibwana appealed for increased support for counties with the most Covid-19 cases.

President is keen to have disputed third-basis formula, which benefits populous counties, passed even though it will see expansive regions lose Sh20b