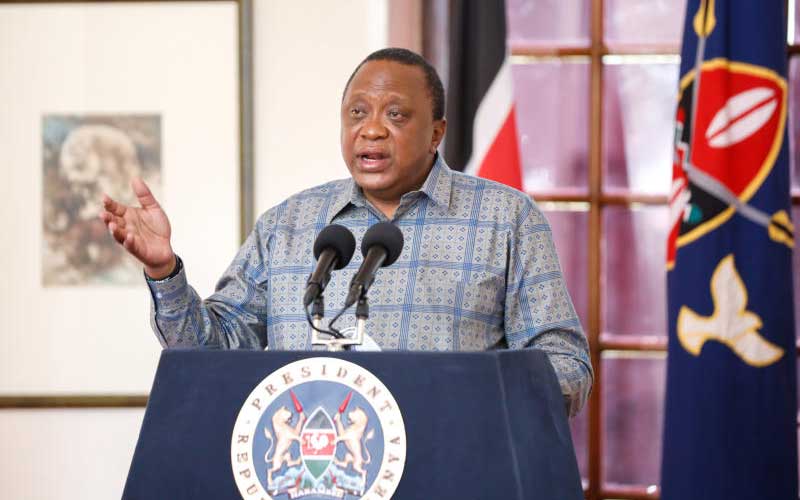 President Uhuru Kenyatta (pictured) at the weekend made impromptu tours around Nairobi to inspect enforcement of travel restrictions imposed to curb the spread of coronavirus.

Yesterday, the President, who was driving his Mercedes G-Wagon in a convoy of four security vehicles, stopped at a roadblock in Ndenderu, Kiambaa, on the Nairobi-Nakuru highway at around 1.25pm.

Sources said he praised the police officers for their work and wished them the best as they enforce the order to stop movements in and out of the Nairobi Metropolitan Area for 21 days.

The Head of State also reportedly demanded total firmness by the police even on enforcing the dusk-to-dawn curfew. Uhuru then left towards Ruaka, as it started to rain.

After announcing the extension of travel restrictions earlier in the day, Uhuru on Saturday night made a similar low-key trip to check compliance with various measures he announced to curb Covid-19 spread.

He is reported to have made the impromptu tour in the absence of members of National Emergency Response Committee that is chaired by Interior Cabinet Secretary Fred Matiang'i, just hours after announcing a 21-day extension of the countrywide curfew.

He visited was Mediamax offices on Kijabe Street and Eastlands. The cars had earlier been sighted fueling at a petrol station in Kilimani.

Government officials said the tour was low-key and at a time most Kenyans were rushing home to beat the 7pm deadline before the curfew begins.

“He, among other issues, wanted to check how Kenyans are complying with social distancing and mask rules imposed in the city,” said an official aware of the trip.

The government has announced various measures to tame the spread of the pandemic.

The measures include mandatory wearing of a face mask, observing social distancing, washing hands, working from home and restriction of movements into and out of Mombasa, Mandera, Kwale, Kilifi and Nairobi counties.

It is not clear what the President's mission was at the Mediamax offices, but officials aware of the developments said company directors were meeting and he went in briefly.

The vehicles later drove back to State House before the curfew hours. The President has lately been driving himself in the city.

The president has lately rallied Kenyans to stick to the guidelines issued by his administration through the Ministry of Health, saying action will be taken against those who flout the rules.

This is the first time the President has been spotted in public outside State House since he announced the first positive case of Covid-19 in March 13 and later issued guidelines to prevent other spread of the virus.

In February, Uhuru shocked Kenyans when he drove himself from State House to Nyayo Stadium to inspect the progress of the preparations for the memorial service of former President Daniel arap Moi.

Patients will be followed for the entire length of hospital stay, with the effectiveness of the drugs monitored

By Stephanie Wangari | 24 minutes ago

By Elvince Joshua | 21 hours ago