How Kenyans are handling the coronavirus pandemic

Since the announcement and confirmation of the first coronavirus case in the country, Kenyans have not been taking things lightly.

Effects of the spread are being felt by the mighty and the lowly.

Churches and mosques across the country have suspended crowded services in a bid to curb the fast spread of the coronavirus in line with the government’s directive.

Jamia Mosque, PCEA churches, All Saints Cathedral and Nairobi Chapel are the latest to suspend their services.

“After a series of consultation with the Majlis Ulamaa (council of scholars) of Jamia Mosque in further consultation and advice from Kenya Muslim Medical Professionals, the Jamia Mosque committee has with effect from today, (Wednesday) temporarily suspended the conduct of all congregational prayers,” a statement from Jamia mosque read in part.

In a statement, Nairobi Chapel told its congregation that: “We have prayerfully resolved to suspend all our corporate worship gatherings, all public church programs and events immediately. This suspension will last for thirty (30) days as advised by the government.”

From the look of things, the weight of the spread of the virus has not been taken lightly.

To protect their staff, some companies have complied with the government’s directive encouraging them to provide soap, water, and hand sanitisers to their members.

For instance, at Standard Group, a mobile hand-washing facility fully equipped with soap and water greets you.  A closer step and a security guard awaits to record your temperature.

Hand-sanitizers are placed on paths frequented by staff to remind you to cleanse.

The Government is set to distribute sanitizers to the public in the fight against Covid-19. Firms in the petroleum and oil industry have agreed to manufacture sanitizers for free.

“Cooperation’s in the oil industry have volunteered to produce alcohol-based sanitizers for free distribution to the public,” Head of Public Service Joseph Kinyua said in a statement.

The same is witnessed at some shops, cafes, restaurants, banks, and supermarkets within the CBD, and guards positioned at entry points to take you through the process.

Customers at Magunas Supermarket in Kiambu County were stunned when they were stopped at the entrance and asked to wash their hands before buying, failure to which they could not proceed.

The busy Mombasa Road and Thika Road are less clogged and the usual morning commute suddenly seems easier as the threat of coronavirus empties the roads.

Funerals, disco matangas, weddings, ruracios and chama meetings have been canceled while businesses are emphasizing on telecommuting. Telecommuting is working from home using the internet and other forms of communication technology.

Travel times began to drop on Wednesday and dropped even more Thursday.

The decrease is evidence that both employers and employees are heeding the advice of social distancing.

The less traffic could also be due to the closure of schools thus reducing the number of vehicles on the roads.

At Nairobi’s Kencom bus stage, passengers are washing their hands or sanitizing them before boarding matatus. (photo)

Fumigation of all buses at Kencom is also underway as Public Service Operators rush to comply with the guidelines.

The transport slowdown isn't just on the roads. At the Jomo Kenyatta International Airport, Nairobi, one of the busiest airports in Africa, the number of passengers going through security checkpoints has also decreased. (photo)

The global pandemic has seen the national carrier, Kenya Airways, suspend its flights to high-risk countries.

The local aviation industry has also been hit hard following the government ban on airlines flying in from countries that have reported coronavirus cases.

Kenya’s seven coronavirus cases are all “imported”, according to Health CS Mutahi Kagwe.

A statement from the KQ’s corporate communications department said two weekly flights each on the London and Paris routes will be suspended from March 25 to April 16.

KQ has already cancelled a number of flights to and from major hubs including Guangzou, China, where small-scale traders source manufactured goods that can be flown in cargo planes.

The virus was first reported in Wuhan City, China. 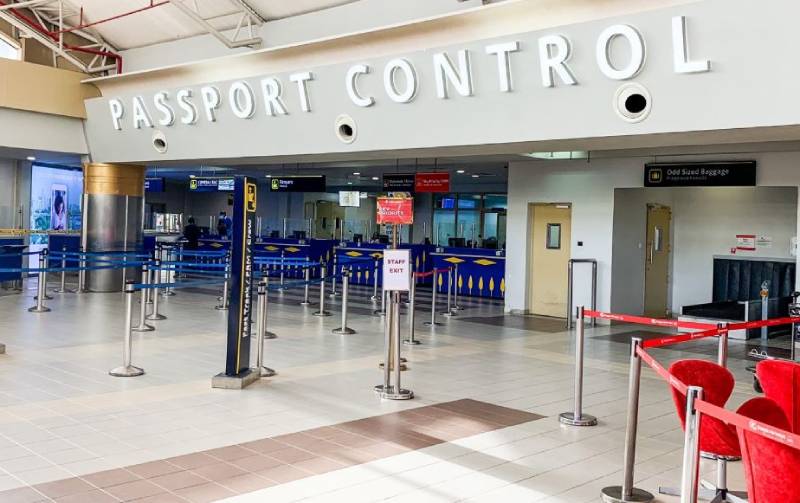 The airline also suspended flights on the Rome-Geneva route on March 12 as Italy continues to bear the brunt of the pandemic. After China, Italy has the next highest number of confirmed cases.

Other routes that have been suspended include Geneva, Bangkok, Djibouti, and Khartoum.

At the Nairobi Hospital, patients and visitors are sanitizing their hands from the moment one enters the gate and before accessing the facility.

Medics situated at the hospital’s entrance are recording the temperatures whilst asking one if they have recently travelled.

Coronavirus originated from China, they should write off Kenya’s debt — Starehe MP Jaguar