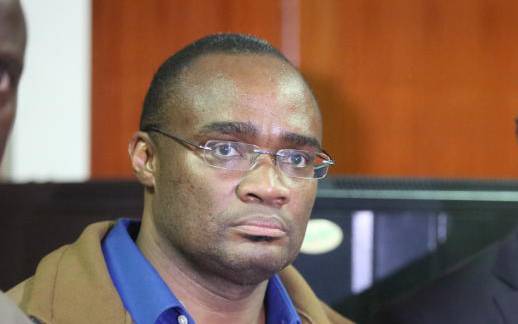 In a letter dated March 7, 2020, Safari (above) said that he is dissatisfied with the recommendations by the Directorate of Criminal Investigations (DCI) George Kinoti to have him charged.

“It will be unfair and unlawful for the prosecution to charge me for doing my job as the law requires, “said Safari.

Safari who is the Commissioner of Customs and Border Control at KRA said that since his elevation to his current position last year, ill-intended individuals have been fighting him after he sealed loopholes used to fleece the Government Billions of money through tax evasion.

On Tuesday, Safari and KPA MD Daniel Manduku were arraigned before a Nairobi court to face fraud charges but their file was not presented to the court as expected.

They were both released unconditionally as it emerged that the Director of Public Prosecution Noordin Haji had sought more time to review the file.

He has asked Haji to relook and reconsider his case and equally invoke his powers by halting the intended prosecution.

“On February 18, 2019, Safari was elevated to the position Commissioner where he has worked diligently,” said his lawyer, Dansatn Omari.

Omari noted that Safari presently faces an imminent threat to his employment and reputation yet he has demonstrated an unwavering commitment to the protection and promotion of public interest.

“It is my prayer in earnest that your office will thoroughly re-look and reconsider this matter,” said Safari.

Omari said that there are attempts aimed at abusing the criminal justice system in order to cause Safari’s un-celebrated removal from office by some ill-intended individual(s).

The officer has raised concern that there are some concerted efforts by some ill-intended to the corrupt justice system.

He said that as a commissioner, pursuant to section 12 of the East African Community Customs Management Act 2004, he enjoys statutory powers which include the power to appoint any area through a gazette notice as boarding area, customs area, and internal container depots.

He said that on May 26, 2019, President Uhuru Muigai Kenyatta visited the Inland Container Depot Nairobi (ICDN) and expressed deep concerns over the issue of long-stay cargo at ICDN that belonged to the small scale traders (SST), to wit, Nyamakima, and Kamukunji area.

“The delay was caused by the increase in cargo to the facility in the course of the year 2018 following the ope-rationalization of the Standard Gauge Railway that significantly eased the movement of goods from the Kilindini Port, Mombasa to the ICDN,” said Safari.

He added that one of the memorable resolutions of the meeting between them and the President was that the relevant government agencies being Kenya Revenue Authority (KRA), Kenya Ports Authority (KPA) and Kenya Bureau of Statistics (KEBS) would facilitate the expedited removal of the cargo.

Safari further stated that the resolution was briskly followed by a circular from the Head of Public Service (HPS) on June 4, 2019, giving directives on the ope-rationalization and improvement of cargo logistics at the ports of entry and inland container depots.

He added that Pursuant to the need to provide additional facilities for storage of cargo by KPA and in line with approval by the Government designed to ease congestion at Ports of Entry, KRA and KPA prescribed minimum conditions to be fulfilled by applicants wishing to offer their facilities for lease by KPA to serve as Peripheral Storage Facilities (PSF).

“That our client avers that through the successful concerted efforts of officers of the customs and border control department and his office, he proceeded to have the two facilities gazette as extensions of ICDN in conformity with the directive by HOPS,” said Omari.

In the letter, Omari said his client decisions and action was at all material time legal and motivated by national concern and the public interest which ensured ease of business amongst SST’s, increased revenue collection by the KRA and proper utilization of the Standard gauge railway.

According to them, it is now strange and shocking to learn that he is under the imminent threat of facing an allegation of the unprocedural gazettement of the Kenya Ports Authority Peripheral Storage Facilities.