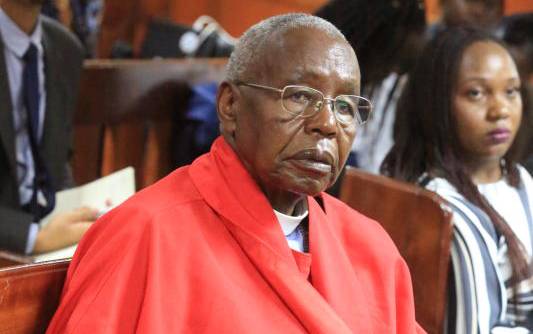 Female Genital Mutilation (FGM) is thriving because men view it as a way of controlling women.

Retired Presbyterian Church of East Africa (PCEA) clergy Timothy Njoya (pictured) yesterday told the court there was belief women and animals are wealth and that the only way to tame them is through the cut.

He said FGM and male circumcision were borrowed from foreign cultures, where men sacrificed sons and daughters to gods.

Njoya, an anti-FGM advocate, yesterday told three High Court judges - Lydiah Achode, Kanyi Kimondo and Margaret Muiga - men moved from killing to cutting parts of the male of female private parts to symbolise a sacrifice from the source of life.

“FGM and male circumcision originated from human cannibalism. They are relics of human sacrifices. Humans were killing their children as sacrifices but they then realised where life started from... and they decided to sacrifice the life bearing power,” Njoya testified in a case where a doctor wants female circumcision legalised.

Kenya’s struggle with the vice during colonial period featured in the heated hearing pitting Njoya, the applicant, Tatu Kamau, and Joseph Kiplagat arap Koech, a traditionalist and a former police officer.

Dr Kamua said Africans practiced female circumcision before colonialists arrived and that the church supported it. She said PCEA split following a declaration banning female circumcision in the 1920s. Those who disagreed with the decision moved out and formed the African Independent Pentecostal Church of Africa (AIPCA).

According to Njoya, men of God had passed a resolution that the custom was evil and should be abandoned by Christians. Through a vote of 30 to nine, Christians who practiced in FGM would be suspended by churches everywhere.

Kiplangat wants women allowed to decide what to do with their bodies upon attaining maturity age.

Country’s highly educated human resource will benefit from free access to other labour markets that were previously restricted.