Migratory bird that had flown from Finland dies of starvation 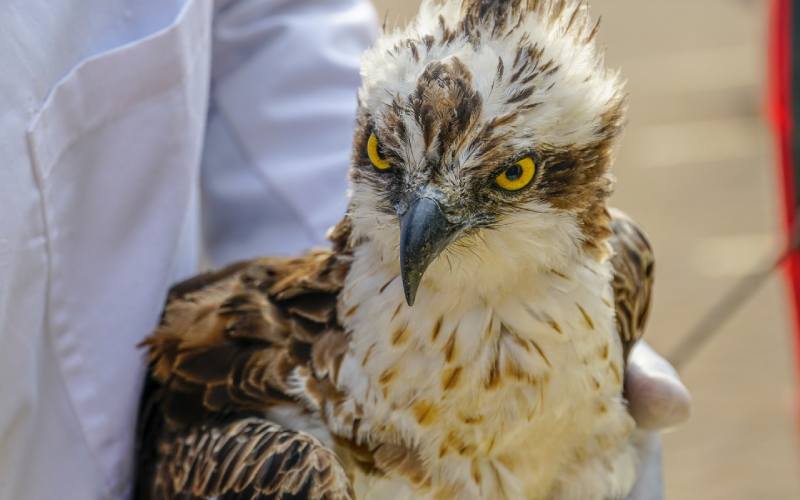 The osprey, a migratory bird flew from eastern Finland and landed in Usalu Village, Siaya County.

The death of the bird was announced by the Kenya Wildlife Service (KWS) days after it was rescued on January 20, this year.

“We regret to announce the death of the rescued migratory Osprey bird despite all efforts to rehabilitate and eventually release it back into the wild. The four-year-old bird of prey died at the weekend while under the care of Kenya Wildlife Service (KWS) veterinarians and a KWS-licensed Raptor Rehabilitation Centre in Karen, Nairobi,” KWS said in a statement.

The raptor bird was rescued on Monday January 20 in Siaya by Mr Walter Oloo, who reported the sighting to the KWS Siaya County office. The bird was then taken to the KWS Veterinary Department in Nairobi and later transferred to the Raptor Rehabilitation Centre.

“By the time the bird was delivered to the city, it had been severely dehydrated, weak and emaciated from the long flight and minor injuries while trapped by the fishing net. It weighed 950g against the normal range of 1.3-1.8kg weight of an adult osprey,” KWS said.

Release back to the wild

After recovery, KWS was planning to release the bird back to the wild by returning it to where it was rescued in the Lake Victoria catchment area. This was to help it not lose its bearings on its return flight Northwards in early March.

The bird’s origin had been established from a referring ring on its leg. It showed that it was ringed in a museum in Finland.

According to Birdlife International, one in five of all the world’s bird species migrate. Every migration is an epic and often perilous feat of endurance.

Different types of birds take routes of widely varying lengths and while some round-trip migrations can be as long as 70,811 kms equivalent to almost two round-the-world trips, others are much shorter.

National Geographic details that some birds even migrate on foot and cover thousands of miles moving across continents.

The risky migration journey often sees the migratory birds taking direct yet dangerous routes that expose them to storms, predators, as well as tough navigation conditions.

In such a perilous journey, some birds get caught up in storms killing thousands and forcing an entire sky full of them to stop at the first land they encounter.

“Birdwatchers revel in these events (known as fallouts). Colourful warblers, orioles, and tanagers decorate every bush and provide eye-level views as they forage ravenously to recover from the difficult flight,” it notes.

Over the years, the exciting phenomenon of migratory birds that transverse continents have been disrupted by increasing hazards such as habitat loss, overuse of pesticides, hunting and trapping of birds in their stop-over grounds. Organisations such as Nature Kenya and Birdlife International have also highlighted fatal collisions with buildings and radio towers as a challenge to migratory birds that fly at night.

Why birds are ringed

According to KWS Paul Udoto, the ringing of birds is usually done for conservation purposes and to know the movements and habitats of migratory birds.

The exercise is also aimed at boosting conservation of habitats where the birds spent most of their times after travelling for miles across the continent at certain times.

“Migratory birds travel miles of kilometres across the continents every year and ringing exercises are usually conducted to trace migratory patterns of these birds and the places they spent most of their times at particular season for conservation purposes. Once established where these birds prefer, awareness for purposes of conservation is usually boosted in such areas,” Mr Udoto said.

Kenya, he added, is a signatory to the Convention on Migratory Species (CMS), whose conference of parties is to be held next month in India and one of the key mandates is to ensure the conservation of migratory bird species.

Bird-ringing in Kenya is often done at Ngulia in Tsavo every other year in October and November, during which migratory birds from Europe are identified.

There are seven documented seven catchment areas of migratory birds among them Lake Nakuru, Naivasha, Bogoria, Elementaita and Lake Victoria.