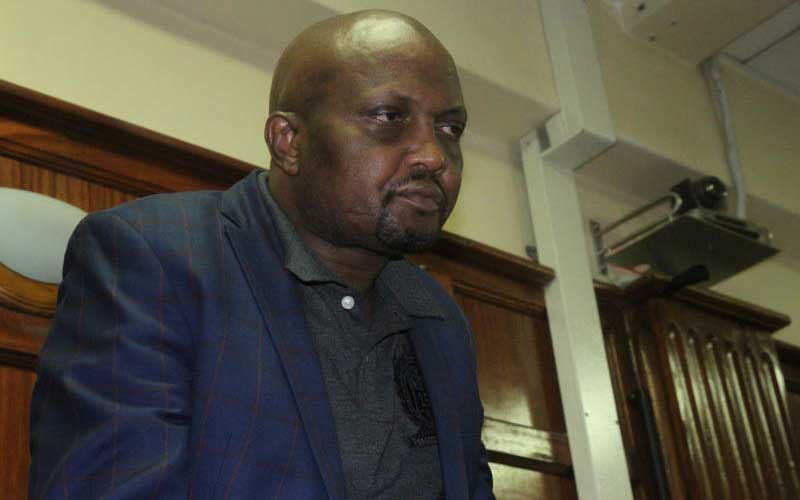 Gatundu South MP Moses Kuria (pictured) is held in police custody after he was arrested for allegedly assaulting an activist.

By 7.00pm, Kuria was still in locked up in cells at the Kilimani police station.

A decision to either present him to court or release him on police bond was yet to be reached.

“We are still waiting for instructions from our bosses. At the moment he is still in the cells,“ said a senior officer at Kilimani.

The MP was arrested at around 10am today by officers from the newly created DCI Special Service Unit (SSU) and handed over to Kilimani police.

He was not required to record lengthy statements with the police and was informed of the allegations of assault filed at the police station last December 8.

Wanja, an activist who works as a media commentator has, in a video clip that has gone viral, claimed that the MP kicked and punched her while she was preparing for a TV debate.

She claims Kuria assaulted her after she demanded that he retract some of the statements he had made against women at a function to help orphans in Kiambu in the presence of children.

Kuria is alleged to have in another video clip that went viral, accused women of wearing smelly panties.

Dennis Itumbi, a digital strategist working for the presidency, said he would present himself to the police and record statements to support Kuria.

“I will be in Kilimani later to record a statement in his favour. The complainant wanted money. Moses said he was not guilty and would not be blackmailed,” Itumbi said on his tweeter handle.

By this evening, Itumbi was yet to appear at the Kilimani police station.