Two months after Diaspora Life premiered on Standard Digital, the show has hit the one- million views mark. The show’s fifth episode titled Mentoring the boy child, got to one million views in 17 days. 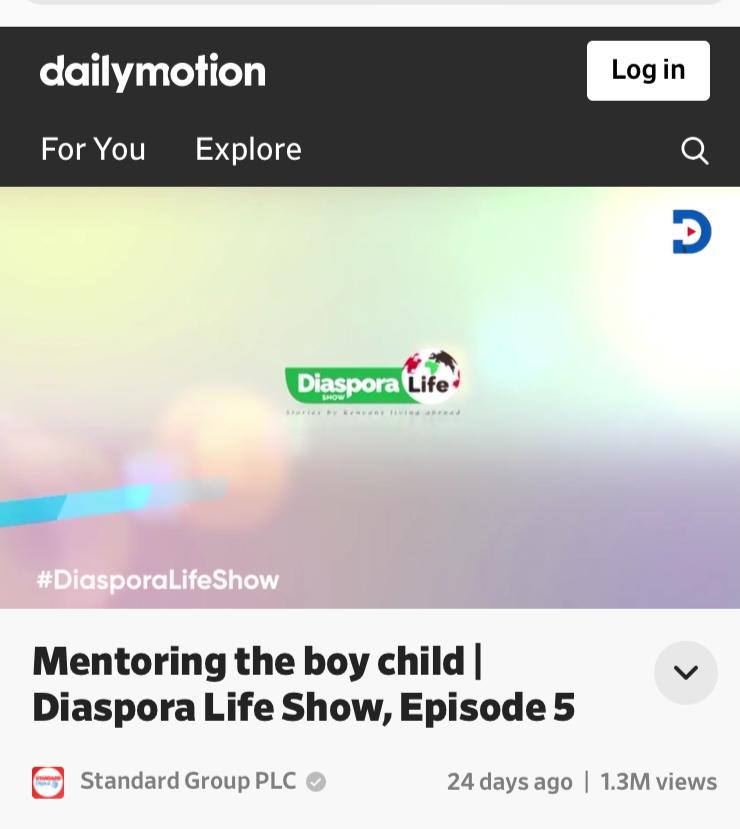 The episode highlighted issues surrounding the African boy child and efforts to identify suitable role models for the upcoming young generation in the diaspora, a task taken up by a group of Kenyans living in America by the name Men Impact Change.

Going by the group’s motto, ‘It is better to raise a young boy than to repair a broken man,’ Men Impact Change has is succeeding in empowering young and ambitious diaspora boys by providing a mentorship platform that inspires and transforms the boy child.

Carole Kimutai, Standard Group’s Digital Managing Editor, says the decision to have an exclusively digital show is meant to meet the content demands of online audience.

"We are very excited by the interest Diaspora Life show has elicited from audiences across the globe. Our decision to exclusively use the web was because of the potential the web has. Our objective is to bring the diaspora story to a platform that generates as many conversations as possible," says Kimutai.

Ever since the show started streaming online, its viewership across several video platforms has been growing steadily. The first three shows garnered a total of 2.2 million views on Daily Motion, 50,000 views on Facebook and 100,000 views on YouTube.

According to our analytics the show is viewed in the United States, United Kingdom, and Canada among others. Most people watch on their devices which confirms the important of the mobile phone in Kenya and globally.

Diaspora Life takes you on a journey through the lives of Kenyans living in the diaspora. From why they made the decision to move, the culture shock, relationships you name it.

The 15-minute weekly online show is hosted by a Kenyan living in the US. The show not only dwells on the accomplishments of Kenyans away from home, but also highlights the negative side of living abroad, an aspect many would rather keep hidden and not talk about, this being domestic violence, pre-mature suicides among others.

Be sure to catch the show every week 19:30 (GMT +3) on Standard Digital Facebook page and live life on the other side through the eyes and testimonies of Kenyans living in the diaspora.

Catch up on previous episodes

Why Kenyans who go to study abroad never come back | DIASPORA LIFE, EPISODE 2

The KWITU (Kenyan Women In the US) Phenomenon | DIASPORA LIFE, EPISODE 3

By Josphat Thiong’o and Jacob Ng'etich