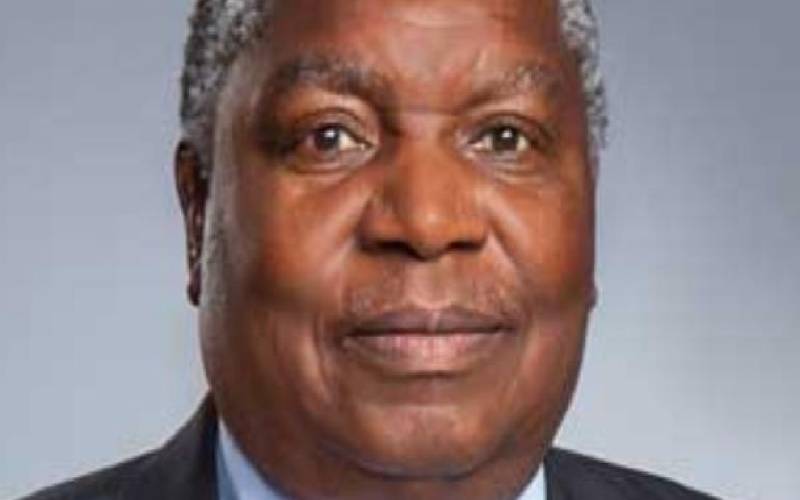 Business mogul Wilfred Murungi (pictured) was yesterday buried in a strictly private ceremony attended by only a handful of close relatives.

Attendance of the burial of the founder and chairman of Mastermind Tobacco Kenya Limited was by invitation only. So guarded was the ceremony that some relatives who had not been invited for the burial were turned away.

Due to his immense wealth, many had expected a colourful send-off for a man gave BAT Kenya a run for its money. But they were disappointed.

One of his nephews who drove his mother to the burial was turned away at the gate with only the elderly woman being allowed in.

According to a relative who declined to be named, only 20 people were expected at the brief ceremony and that was the exact number of chairs that were arranged at the tent where the ceremony took place.

Sources told The Standard police officers who had been deployed to provide security in the compound and enforce the privacy orders outnumbered the mourners.

Apart from the choppers that flew in his body and ferried close family members and the hearse, nothing would have betrayed the ceremony to be that of a billionaire who earned his place at the high table of power and wealth in the 1990s.

For a man known for his philanthropy back at his home area in Maara Constituency, his insistence on a strictly private burial left many tongues wagging.

An obituary in the dailies indicated that a memorial service would be held at the All Saints Cathedral in Nairobi tomorrow- two days after his private burial at his Magutuni home, and next to his wife who died in 2010.

His body was flown to Kiurani Primary School in a chopper that touched down at 11.07am. A second one carrying his four children- Audrey, Angela, Alan, and Eric, following closely.

In 2010, his wife’s body was also flown into the same school for a burial that was supposed to be attended by 40 people only.

Murungi did not attend his wife’s burial, with some relatives claiming it was out of respect for her wishes. Instead, he escorted the body from Nairobi, handed it over to the children and left.

Yesterday, residents expressed their disappointment at being locked out of the burial of a man they described as generous to a fault.

“It is unfortunate that we did not get a chance to appreciate his generosity with a good send-off that he deserved. We were told he decided to make it a private family affair,” said Nancy Kainyu, a resident.

Members of the Arua clan, to which Murungi belonged, expressed their disappointment after being denied a chance to bury one of their own.

A local administrator intimated to The Standard that no one was allowed close to the casket carrying Murungi’s body on its arrival at the school grounds.

Even the few men hired earlier to dig his grave were turned away at the gate during his burial.

Journalists were not even allowed anywhere near the gate.

There were no photographers, no printed eulogies, not even meals during the event that took one hour before his family quickly boarded the two choppers and left.

They left behind a host of disappointed people, including businessmen from Magutuni town, who had expected to make a kill from mourners.

Murungi first worked as an engineer with the British American Tobacco before quitting to set up Mastermind Tobacco in the late 1980s – first in Nakuru and then, when the business did well, in Nairobi.

He survived intense battles from his competitors in the tobacco industry, and the Government, which demanded millions in taxes.

After starting the company, Murungi became a recluse. Many in his home area rarely saw him at his homes in Magutuni and Mwiria in Maara sub-county.

The homes are so heavily guarded that visitors have to pass through four gates to reach the homestead.

Still, behind the gates, Murungi actively participated in charity work through proxies.

At one time, he is said to have offered to tarmac Keria-Magutuni and Katharaka Ikumbo roads. The story goes that the offer was turned down by a local politician who feared the millionaire was plotting a political entrance.

He treated the nearby Kiurani Secondary School as his pet project, buying the students their first school bus and sponsoring the construction of a multipurpose hall named after him.

Another Nairobi Expressway crash at Mlolongo toll station
Nairobi
By Betty Njeru
12 hours ago
Manguo wetland chocking under aborted foetuses and deadly hippos
Nairobi
By Jacinta Mutura
1 day ago
Bleaching soaps, creams and shisha top seized at JKIA
Nairobi
By Pkemoi Ng'enoh
3 days ago
Premium Johnson Sakaja's governor bid hangs in the balance as CUE revokes his degree
Nairobi
By Nathan Ochunge
3 days ago
Sakaja: I will be on the ballot
Nairobi
By David Njaaga
3 days ago
Premium Acquittal of former city finance boss in Sh18m graft case revoked
Nairobi
By Paul Ogemba
4 days ago
.