NAIROBI, KENYA: Kenya’s mobile service sub-sector has witnessed a steady increase in the number of employees in the past five years.
Data from the Communications Authority of Kenya (CA) shows additional 2550 people have been added into the industry from June 2016 to June 2020.

The five-year trend of employment in the sector also shows more male employees compared to female counterparts by a difference of 1,260. 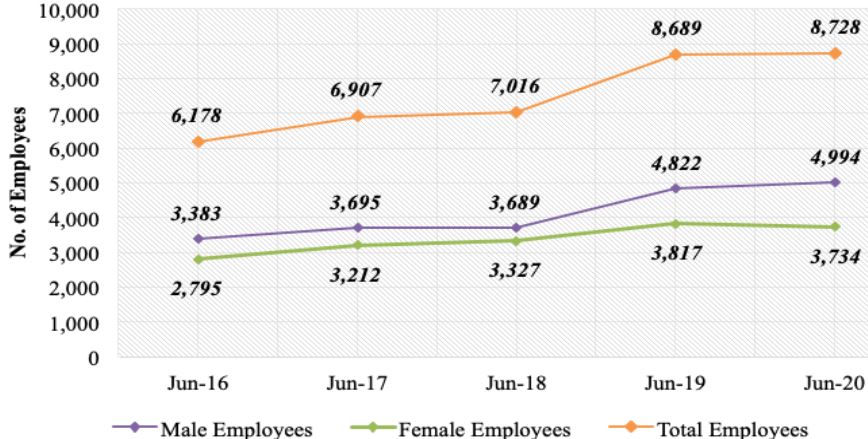 During the month under review, Safaricom took the lead in the fixed data segment, surpassing market leader Wananchi Online’s Zuku.

CA indicates Safaricom’s fixed data customers jumped 25 per cent between March and June 2020 to stand at 207,398, giving the firm a 33.5 per cent market lead.

Wananchi Online’s Zuku service saw a 15 per cent increase in subscribers between March and June this year to stand at 201,605 translating to 32.5 per cent of the market.

The new statistics chart the high demand for internet connectivity in the months following the outbreak of the COVID19 coronavirus where millions of Kenyans were forced to work or study online owing to health and movement restrictions.

Overall, consumers used up 132,397,651GB of mobile data between March and June 2020, 19 per cent higher than was consumed in the previous quarter.

Activity on the country’s domain registry also registered an uptick in activity. According to the data, 4,355 companies and 30 institutions of higher learning registered websites under the .co.ke domain.

And despite the increased cases of cybercrime cited by various organisations during the months the economy was under lockdown, data from CA paints a different picture.

“During the fourth quarter, the National Computer Incident Response Team/Coordination Center, KE-CIRT/CC detected 13.9 million cyber threat attempts, which was a 59.9 per cent decrease from the 34.6-million cyber threat attempts detected in the previous quarter,” explains CA in the report. “This decrease was attributed to timely incident response mechanisms and increased endpoint security measures adopted to protect end user devices.”

Kenya’s postal system however did not fare too well, reporting the worst quarter in recent history. The number of letters sent locally fell from 8.5million in the previous quarter to 3.5million, a 58 per cent drop. International outgoing letters similarly recorded a 61 per cent drop from 865 thousand recorded in the previous quarter to 332 thousand in the three months ended June 2020.

“The decline is attributed to the COVID-19 pandemic, which impacted on economic activities thus limiting letter postage as a means of communication among corporates, SMEs and individuals,” explained the CA. “In addition, some public institutions adopted online services especially during the COVID-19 pandemic, affecting postage of letters as well.”

By Perminus Wainaina | 8 days ago

By Kennedy Gachuhi | 13 days ago

By Stevens Muendo | 13 days ago