How I was conned 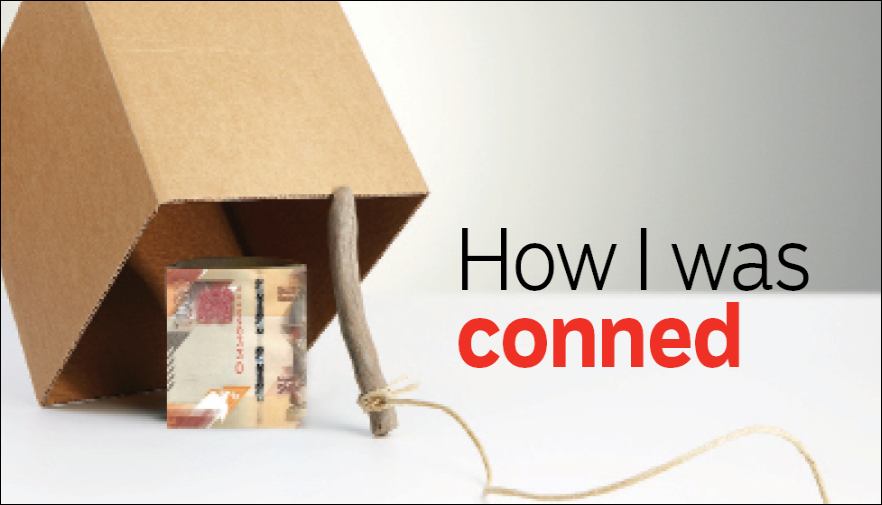 They say you are not a true Nairobian until you have been conned. Three people share how a smooth and sleek con artist effortlessly relieved them of their money.

The poorer you are, the more you are vulnerable you are…

Sylvia had just finished campus and on her first job. Salaries were never paid on time and on this particular day, right on the mid of the month, the previous month’s salary was unpaid.

With no mobile or online banking then, one had to go to the automated teller machines to check bank balance. She banked with National Bank. And this is where the con must have spotted her and singled her out.

“I was angry and disappointed that my account was empty. Then I felt someone tap my back. It was a handsome man in a blue suit, holding a brown envelope,” she recalls.

After greeting her, he asked her if she had dropped an envelope. She hadn't. It was then the man showed her the envelope and told her that it contained Sh40,000.

“He said that since was neither mine nor his, we should share. I told him that we ought to take it to the police. After failing to convince me to keep the money, he started walking away saying that if I was not interested, he would keep it."

It was then she remembered that she only had bus fare for the evening commute. She needed to refill her gas cylinder and started imagining what she would do with her share of spoils. So she followed him...all the way to Jevanjee Gardens.

“I have never walked so fast, like a woman possessed,” Sylvia says. At Jevanjee Gardens, the man told her to go to the toilet (for security) and divide the money into two portions. But there was a catch, she needed to leave him with a valuable item so that she wouldn't make away with the money.

She gave him her handbag and rushed into the public toilets.

“Unbelievably, all I found inside the envelope was a Sh50 note with newspaper cuttings. I rushed outside to tell him that there was no money, very afraid that he would say I had conned him. He had disappeared.”

She began asking if anyone had seen a gentleman in a blue suit holding a handbag, and she was dutifully informed by the nearby guards that she was the fourth victim of the day.

“I quickly learnt that the poorer you are, the more vulnerable you are.” I still look for a man in a blue suit. I have never forgotten his face.”

I only wanted to help out an old man

One fine day a few years ago, Meshack walked out of church into the nearby cash machine to withdraw Sh5,000.  As he walked out, a man in cheap suit stopped him. He spoke a heavily accented English. "He sounded like he had just come from Meru."

The man said he had won Sh2 million on the Kenya Charity Sweepstake. Problem was, he did not know where the offices are. The ticket indicated that offices were somewhere along Moi Avenue. Meshack knew the building.

“He sounded convincing,” Meshack remembers. He promised Meshack some portion of money if he went with him to the offices and redeemed the ticket on his behalf. It was an enticing offer, and the man looked lost and afraid of being alone in the city.

They walked down to Moi Avenue. The offices were supposed to be on the second floor of the crowded and poorly lit office building. Once there, the old man asked Meshack to give him a valued item to ensure he wouldn't run off with his winning ticket.  Meshack offered his ID, but the man didn’t think it was enough. Meshack gave him his wallet containing Sh 5,000 and his phone, and gingerly went up the flight of stairs. All he had to do was redeem the ticket and be richer for it.

However, where the offices were supposed to be, he met a befuddled group of stall owners who explained to him that there was a group of Meru men who were swindling people and directing them to the building.

“My knees went weak. But I knew he would be gone by the time I got there. I was truly angry. But I learnt a very good lesson that day."

My husband can’t know I lost this much…

There is bus stop in Rongai where Grace, who is a teacher and a land seller, boards a matatu every morning. Occasionally, private motorists pick up people and charge them the same amount as matatus would charge.

In 2018, Grace got into such a car. The driver was the chatty type. “He said his name was Ben and struck up a conversation right away and even asked for my number. We exchanged numbers. He was quite the charmer."

A week later, the Ben called her. She had not saved his number on her phone.

“He acted like he was hurt that I had not saved his number,” Grace says. Ben needed Grace to do something for him.

He needed Grace to pick up some ball bearings from someone and he would pick them from her once he was back in Rongai.  Grudgingly, she accepted. Ben then called Grace and requested her to give the delivery man Sh15,000 for the goods and he would refund Grace the money.

“Usually, I am not that stupid, but there is something these guys do to you, because I agreed to it,” she explains.

Ben wasn't done asking for favours. He asked her to pick more ball bearings from a certain lady and requested Grace to pay the lady. He said he would pick up the supplies the following day. This lady somehow managed to convince Grace to invest in the ball bearings business because they were quite the hot sellers. And so, Grace gave the lady Sh150,000 and in return got a bag of the bearings.

“I was ready to make a business out of selling these spare parts that were very marketable."

But the following day, Ben didn't show up and calls to him dropped. At the local hardware, she found out that the ball bearings she had received were worth Sh10,000 and were not even in high demand.

“I have since learned that it is a large syndicate that involves Chinese nationals and some Kenyans, and they have swindled many other people,” she says.

To date, she hasn't told her husband how she lost her savings.

When you take money to them, they ‘wash’ the films and give you ‘your’ money. Usually they will double your amount. They ask you to bank it. The bank will accept it since it is genuine money and this makes you trust them. You will then bring them more, and they will repeat the process. They are fattening you up for what is to come. Many bring their life savings or get a loan, after all they have been doubling your 'investment'. Greed will get the better of you and it will not be long before you give them Sh200,000; or the amount they are angling for. Here is where all hell will break loose. Either, there will be a staged police ambush, or the crooks just make off with the money, leaving you feeling like a fool because you cannot report them to the police.

They waylay innocent people in the streets under the ruse of praying for them. They like singling out young women. Often, once you give them audience, they will feign concern and do some guesswork of predictable problems any young woman can have. Sometimes, the woman will agree to be prayed for. She gets drugged during the prayer session and she will not notice when they disappear with her handbag.

Usually an elaborate scheme that involves individuals at the Ministry of Lands who generate fake documents. Things seem good and you pay for everything only to be accused of trespassing when you go to view your plot of land later on. Silas Opanga, a Nairobi- based lawyer blames ignorance or greed for the proliferation of con artists.

Rich people, especially if ignorant, are very vulnerable. When sick, they will fall into the hands of conniving preachers, who claim that they can get healed through prayers. And some preachers pray for weeks or even months, all the while getting paid by the victims.

Whether it is joining the police force, or the Kenyan Defense Forces or being offered a job in the Middle East, every year many Kenyans lose millions of shillings to middlemen who charge 'commission' to help them secure jobs. Some of them ask the victims for money to bribe the authorities. There is little that a victim can do because the whole process involves illegalities. For the many HR practitioners in town, getting money from vulnerable young men is the order of the day. Some of these agents have offices in decent office buildings in the city and thus, the victims do not doubt them.

By Sunday correspondent | 3 days ago