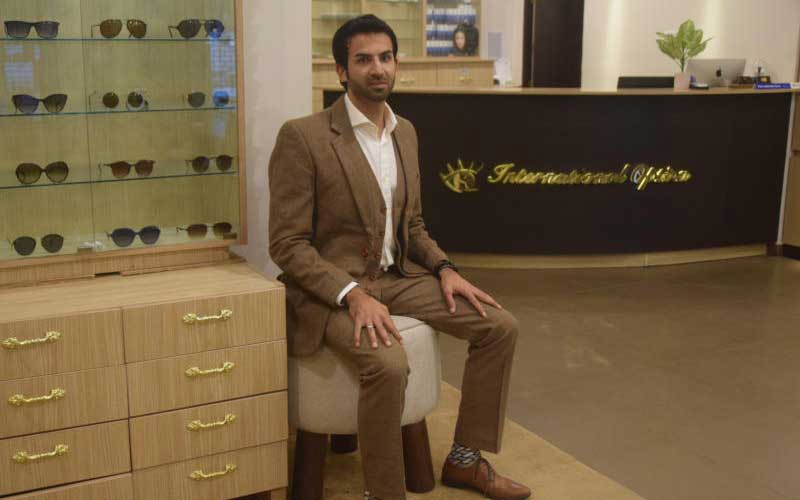 Safder Valli (pictured) grew up around opticians and prescription glasses as his family business was a long running optical shop in Mombasa that still stands to date. Therefore, he was familiar with the Snellen Eye Vision Chart to measure eye sharpness. His choice of career when he finally grew up was pretty obvious. He was going to be an optometrist, following in the footsteps of his father Hussein Valli who has been fitting prescription glasses since 1979. It is in England where he actualised his dream by attending City and Islington College and later Cardiff University between 2004 and 2009. After qualifying as a dispensing optician and optometry, he did his pre-registration which is the equivalent of pupilage at SpecSavers, a British Optical Multinational and later did his internship at Vision express in England. “My first real job was at Boots Opticians and I have to say that the experience I gained there was invaluable,” Safder says. Safder who had by the time married and started a family decided to consult with his wife regarding relocating to Kenya home and establishing their business. “I laid out my plan to her and she was all for it,” Safder says, on the agreement that they should set up back an optical business back home. She supported him as he saved enough to begin an optical business and carry out the Valli family legacy. “It was a challenge because we were determined to set up a business that would measure up to the European standards that I was accustomed to,” he says. Comparing what he grew up around and the exposure he had been accustomed to in England, it was obvious that the budding entrepreneur had a tough task ahead. They came back to the country and in their haste to settle earliest possible, fell prey to the many swindlers masquerading as property agents in Mombasa. After losing a pretty penny, the Vallis were lucky to get a big shop in the city’s main thoroughfare, Moi Avenue and they set up International Optica. “We were determined to digitise and improve on my father’s Inter Optica which had stood the test of time. We wove into our fabric values which earned my father loyalty for the past 40 years,” Safder says. After the trying hustle of getting the right location which had ample space, Safder and his wife embarked on designing the outlay of the shop. The two came up with a blueprint that resembled any optical outlet in Europe. A carpeted lounge with a homely touch, wall display of frames segmented to showcase the works of individual eye wear designers, and mirrors mounted onto columns along the display area. They even placed a glass-themed card holders on the tables. Adjacent to the reception would be several partitioned clinics where the machines and the specialists would attend to their patients. “We stocked cutting edge equipment and had an auto refractor machine, a split lamp tonometer to determine eye pressure. In fact we can easily tell apart our glasses as they have all display an even smooth edge from our glazing machine,” says Safder. The optometrist says that business has not been easy especially since they do not compromise on quality.”We broke even after nearly two years of investing and ensuring we are doing a better job than the competition,” says Safder. International Optica has branches in many counties. They stock designer lenses, the latest brands as well as branded frames. “We even stock budget frames and take pride in the fact that we can accommodate the low end as well as high end clients,” Safder says. The outlet says that they conduct in house training to standardize service and ensure that their staff are up to speed with optical technology at all times. After the initial challenges of setting up the business and running it on a day-to-day basis, Safder says that he dared to dream big and is grateful that he is among the lucky few who had the privilege to realise and live their dream. He says that he could never have achieved what he has were it not for the blessings of his father and his wife who has been a pillar of support to him throughout their journey. “That is why I will keep pushing the boundaries of the local optical industry and keep raising the bar to give clients what they deserve,” he says.