At the age of 28, worries of life may not be everyone’s cup of tea. But when an entire community depends on you, men and children calling out your name seeking their next meal, you hardly find time for yourself and your worries become the community’s.
Mabatini Ward in Mathare Constituency hosts about 500,000 Kenyans most of whom live from hand to mouth. The curfew respects no man while the coronavirus effects have swept the area entirely despite a few continuing with their day to day lives.
Racheal Mwikali, a human rights defender and the founder of a coalition for grassroots’ human rights defenders based in Mathare, is the soul and heart of some families in this ward who rely on the little she can provide for their next meal.
“This movement was formed to stand for social justice and women rights in 2016 bearing in mind some people in this area have faced violence of a different nature, she says, adding that “I got into an early relationship and faced violence which motivated me to fight for women especially those in the grassroots”.
With a team of about 150 volunteers and she reaches families throughout the ward and in other communities.
Today, two women are waiting for her at the office for help. They are provided with a bag each containing two packets of flour, a bar of soap, a packet of salt, a kilo of rice, and a kilo of sugar. It is not much but it will last them a couple of days and this package varies depending on family size.
Through the help of well-wishers and friends, she feeds more than six hundred families weekly based on need. 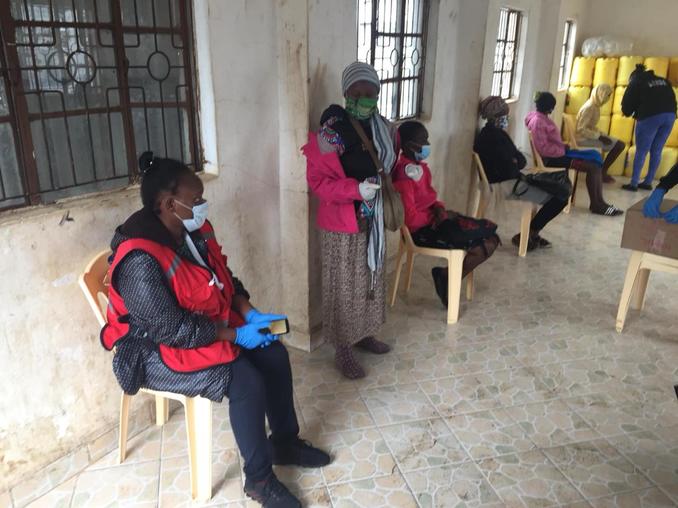 “As an activist, I feel supported because my friends from all over have come out to help these families, I may not be able to feed them daily because of resources but with the little they contribute I share with the families,” says Mwikali.
In 2017, President Uhuru Kenyatta assented to the Basic Education Amendment Act which charged the government with providing free, quality sanitary towels to every girl who has reached puberty in a public basic education institution.
But with schools closed, it brings out a challenge to access these important commodities for the young girls in the community.
“We need more sanitary towels to reach different people. We have reached about 300 girls but we still need more”
For about four years Mwikali has been in this space fighting for human rights, living among the community, and comprehending what goes in and out of the community.
Naomi Wanjiru a mother of three is a beneficiary today of the food pack from the organisation.
“I have no work. I wash clothes for people in Eastleigh but with the curfew and restricted movement, I have to stay at home since no one will allow me to go to their homes to work,” says Wanjiru.
Being the sole breadwinner of the family she struggles to make ends meet.
“My biggest problem after food is rent. I am required to pay my monthly rent yet I rely on day to day jobs to make a living,” adds Wanjiru.
She wishes that the government could stop rents maybe life can then be bearable.
Zahra Ali, a resident of Mabatini is here to get the food pack to get through for the next few days.
“I am a mother of two… right now I have no work after it came to a sudden halt. I tried business but nothing seems favourable. The weather is not favourable and when time lapses to evening you should be indoors. At the end of the day you can hardly achieve anything,” says Zahra.
Misunderstandings are inevitable during this time but Naomi has adopted to enjoying life with her family during this period.
“My children and I have to understand each other now because we have no one else to turn to,” says Naomi.
Rachael is pleased that the government directive to ensure everyone wears a mask is now taking foot in the community but she is worried the government did not consider other aspects like gender-based violence during this curfew period.
“Sanitary towels and lack of contraceptives is the biggest challenge in the slum right now. I have just come from filing a report at Huruma police station but sadly the officers have told me the man cannot be arrested yet the man was very violent to his wife,” Laments Mwikali.
During this curfew, the country has witnessed an increase in the number of gender-based violence cases.
Director of Public Prosecutions Noordin Haji in an interview at a local station noted that;
“Defilement and rape are happening, though we are still not able to tell in what environment or what context, but a lot of that is happening.”
Between January and March, women and girls have reported the highest number of gender-based violence cases.
Nairobi being the central point in these cases, 106 women and girls reported being either physically or sexually violated while nine men and boys reported the same.
Gender violence is not the only major problem in this community. Children are still loitering all over the streets oblivious to this pandemic that defies class and age.
School would keep them busy as their parents toiled to provide for them. According to a directive from the Cabinet Secretary for Education, George Magoha, the end of the holiday for these children is not near sight.
“At this point, the government has not decided to postpone both KCPE and KCSE. Let the children enjoy their last week on holiday and then start the one month that has been added to them,” Magoha said.
Mwikali is worried about this school-going lot.
“Not everyone can afford to enroll online and ensure their kids learn, many people in the community cannot understand how some of the online program work but, above all, these people cannot afford to buy those bundles required to facilitate online learning. I am a student at Daystar University and I find it hard sometimes to log in to the zoom sessions,” says Mwikali.
The community storage area has little food left to donate to the families within the community and she hopes that other well-wishers will come in to help the families.
During the weekend Mwikali’s friends and well-wishers raised Sh 250,000 that will go a long way in helping the families not only in Mabatini area but the larger Mathare constituency.
“My dream is to see this community food-secure. If the government can ensure that, then this will be a safe space for children and families to thrive,” says Mwikali.
It is midday and she has to close down the office so that people do not crowd it as she leaves to pick up some food items donated by friends.
Men and women sit put outside the office awaiting her return for she is their hope until they can manage to fend for themselves.