KCB move second after coming from behind to edge Mwamba

Defending champions KCB on Saturday moved second in the 2021-2022 Kenya Cup log after coming from behind again to thrash Mwamba 39-30 in an entertaining rescheduled match played at the RFUEA Grounds.

The bankers were riding high from their last weekend’s 45-10 comeback win against Kenya Harlequin and were hoping to do even better especially after the return of their Kenya Sevens stars from international duty including debutant Alvin ‘Buffa’ Otieno, Johnstone Olindi, Levy Amunga and Shujaa’s World Seven Series try top scorer Vincent Onyala.

The win saw them move to second above Menengai Oilers on 36 points after eight matches.

In the process, KCB are now trailing Kenya Cup leaders Kabras Sugar on four points as the millers sit top with a perfect 40 points.

The bankers kicked off the match on the front foot after Jacob Ojee crossed over for the first try that was converted by Darwin Mukidza for a 7-0 lead.

The hosts proceeded to take the lead after Joel Inzuga crossed over for Mwamba’s second try of the match which was converted by Kivasia for a 12-7 lead.

Kivasia would stretch the lead further with a penalty for a 15-7 lead before the Kenya Cup holders pulled back through Ojee’s second try for a 15-12 score line.

Mwamba would take an 18-12 half time lead after Kivasia split the posts with his second penalty.

After the restart, Mwamba picked from where they left when Yahya Hussein grabbed a try off a ruck to extend their lead to 23-12.

Trailing by 11-points, Curtis Olago’s charges woke up from their sleep and stepped on their engine as KCB immediately pulled back with a try from Max Kangeri to move to 17 points after a missed conversion.

KCB continue to put pressure on the hosts and Oscar Simiyu landed a centre post try that was easily converted for a 24-23 lead.

The defending champions increased the tempo which saw Mukidza score the fourth try that Johnstone Olindi converted for a 31-23 lead.

Wanjala crossed over for another try that took the scores to 36-23. Mwamba scored a late try and KCB converted a last gasp penalty to win 39-30.

By Washington Onyango Sep. 11, 2022
Why Shujaa put up another poor show at the global stage
. 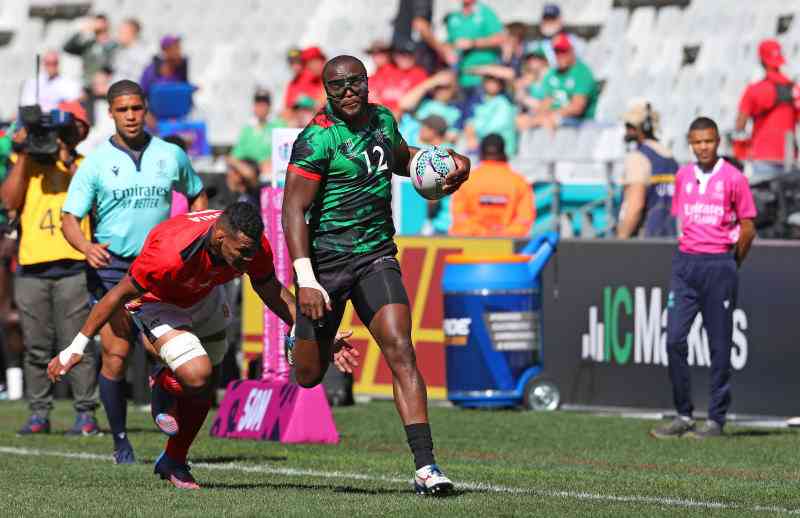