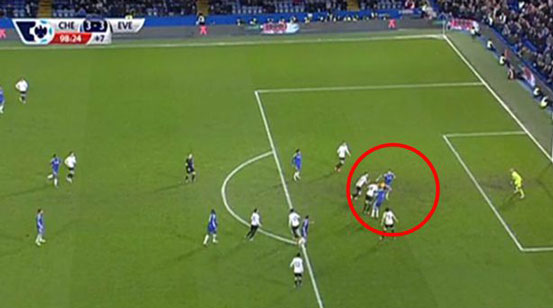 The visitors looked on course for their first Premier League win at Stamford Bridge for 22 years after Ramiro Funes Mori acrobatically put them ahead in the 90th minute but ultimately paid a heavy price for spending so long celebrating the goal with their fans in the corner.

The fourth official's board indicated seven minutes of stoppage time and that, plus another 51 seconds, had ticked by when Terry, who was clearly offside, sent his backheel into the net.

"It's heartbreaking for us, a big, big error," Martinez told reporters. "It was a fantastic game for the fans but the level of refereeing was diabolical.

"You expect linesmen to be in better positions, Terry was already offside and the flick on made him two yards offside. That's not an interpretation, there is no explanation.

"The fourth official said the time was up. The seven minutes was difficult but you cannot explain another 50 seconds," added Martinez.

"It was a fantastic performance, showing great skill and character, but there is an understandable feeling of frustration."

The rip-roaring finale capped a spectacular second half as Everton went 2-0 up with a Terry own goal and a crisp turn and shot by Kevin Mirallas.

Chelsea, who had offered virtually nothing in attack for the first hour, levelled with two goals in two minutes after Diego Costa cashed in on a mix-up between Phil Jagielka and goalkeeper Tim Howard who was then left helpless when Cesc Fabregas's shot took a huge deflection.

"They were celebrating their third goal, we asked the fourth official to add a minute for that, that was fair I think," was Chelsea boss Guus Hiddink's view of the stoppage-time controversy.

"To be 2-0 down against one of the smartest teams in the league, I'm very happy with the spirit and attitude of the team," added the Dutchman who agreed Terry was offside.

Though Hiddink drew satisfaction from the double fightback, he has yet to have any noticeable impact on the champions since he replaced Jose Mourinho last month.

They remain in the bottom half of the table with time running out for a late charge for a Champions League place.

Chelsea have already conceded more goals in 22 games this season (34) than in last year's entire campaign (32), including 19 in 12 home games so far compared to nine in 19 last term.

They suffered another blow on Saturday when Costa sustained a shin injury that resulted in him going to hospital for a precautionary scan.