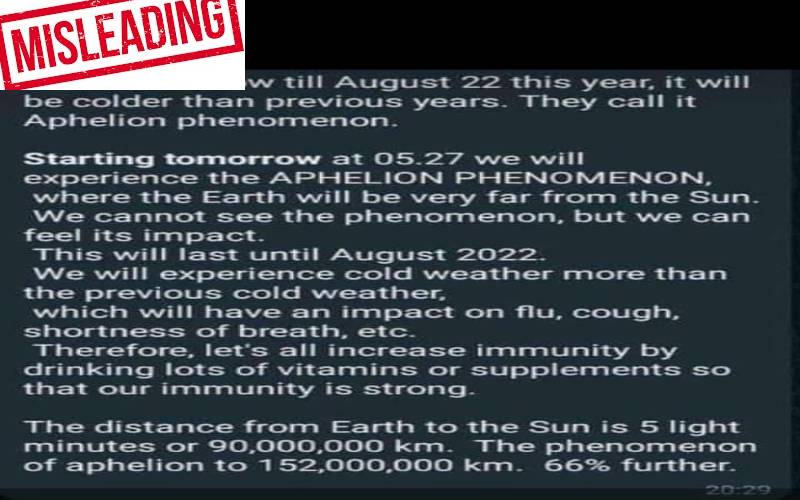 If you are a Facebook, WhatsApp or Twitter user, you probably have seen or received this message several times: “From tomorrow till August 22 this year, it will be colder than previous years. They call it the “aphelion phenomenon.”

According to the claim, the cosmological event is going to cause weather that is colder than usual because the phenomenon will increase the distance between the Earth and the Sun to 152 million kilometres compared to the usual average distance of about 90 million kilometres.

The claim: Kenya to experience extremely cold weather due to a cosmological event known as the “aphelion phenomenon” 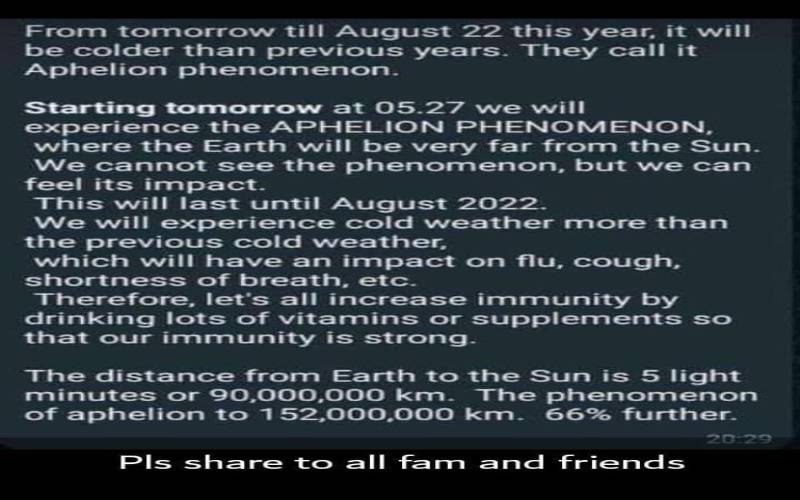 The message, which further warns of consequences such as flu, cough and shortness of breath is beginning to sound true for many Kenyans as the cold weather sets in.

And so the message keeps circulating to “all fam and friends” as the author appeals at the end. But how much of this is true?

Where is the message coming from?

The Standard Checkpoint Desk has established that the claim originated from Indonesia in February this year.

Indonesia’s weather agency debunked the claim, saying that aphelion does not have a significant impact on the temperature of the Earth.

Aphelion phenomenon will not cause colder weather

We found this claim that Kenya is going to experience extremely cold weather as opposed to previous years to be misleading even as it keeps circulating on social media.

The Standard’s Checkpoint Desk reached out to Kenya Metrological Department which also dismissed the claim as misleading.

Mary Kilavi, an assistant director of public weather services at the Kenya Metrological Department explains that aphelion is the point in Earth’s orbit that is farthest from the sun and the planet is always at this point in the month of June.

As a result, Earth is sometimes closer, and sometimes far away from the sun, with the closest point being known as the perihelion.

Ms Kilavi says both perihelion and aphelion happen once a year, and there is nothing unusual about the two phenomenon in this year.

“As far as we know, the southern hemisphere won’t be experiencing “cold weather more than the previous cold weather” as it enters winter. the claims as stated are misleading,” she said.

Usually, the dates of perihelion and aphelion change slightly every year, but they often fall in January and July respectively.

Current cold weather is not influenced by Aphelion

Kilavi said the claim that the average distance between the Earth and the Sun is 90 million kilometres is wrong.

“This difference of two million kilometres would therefore not be enough to make a difference on Earth’s weather,” she said.

Weather patterns in the country, she explained, are “extremely complicated” and are affected by many different things.

Ms Kilavi concludes that although Kenya always heads to a cold season between the month of June till August, the information relied in the claim is not accurate. 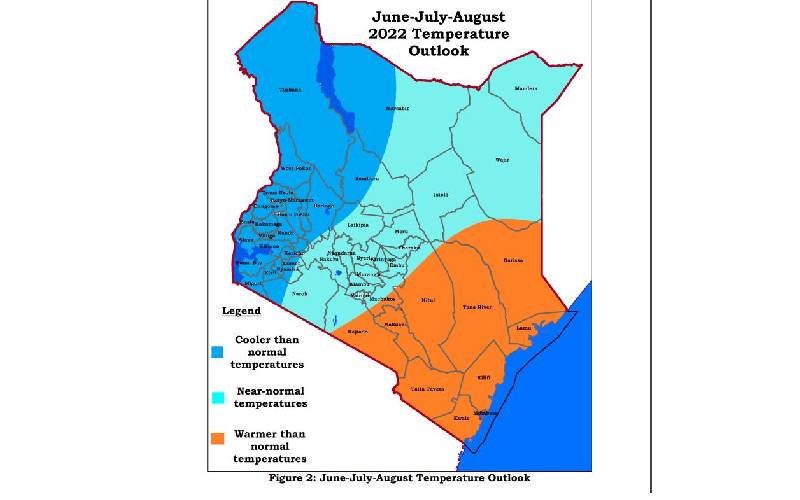 “It is true we are headed to the cold season but to our prediction, we foresee a warmer season as opposed to what the claim states,” she said.

In a three-month forecast issued by Director David Gikungu, during the June-July-August Season rainfall is always concentrated over the western region and the coastal strip, while the rest of the country remains generally dry.

During this period, most areas in the Highlands East of the Rift Valley (including Nairobi County) usually experience cool and cloudy conditions with occasional drizzle or light rains.

Prolonged hours of overcast skies (cloudy conditions) are expected to cause cold and chilly conditions on some days.

David Koross, the assistant Director of Forecasting at the Kenya Metrological Department said such conditions always have an impact on people’s health.

“The general public is advised to adopt warm dress codes, eat warm meals and follow advice from the Ministry of Health,” said Koross.

Respiratory diseases at this period enhance the chances of people falling for the claim that there is going to be an unusually cold season which will have an impact on “flue, cough, shortness of breath, etc” that is claimed in the message.

Mr Koross advises the public to avoid using charcoal jikos in poorly ventilated houses as these jikos produce carbon monoxide gas that is lethal when inhaled.

The meteorological department forecast further indicates cases of malaria are also expected but this may not rise beyond normal transmission due to the predicted reduced temperatures during the season.

Conclusion:  We rate the “aphelion phenomenon” claim as misleading.

Other independent fact-checking organisations like AfricaCheck and Rappler.com have also debunked this claim and ranked it as FALSE. 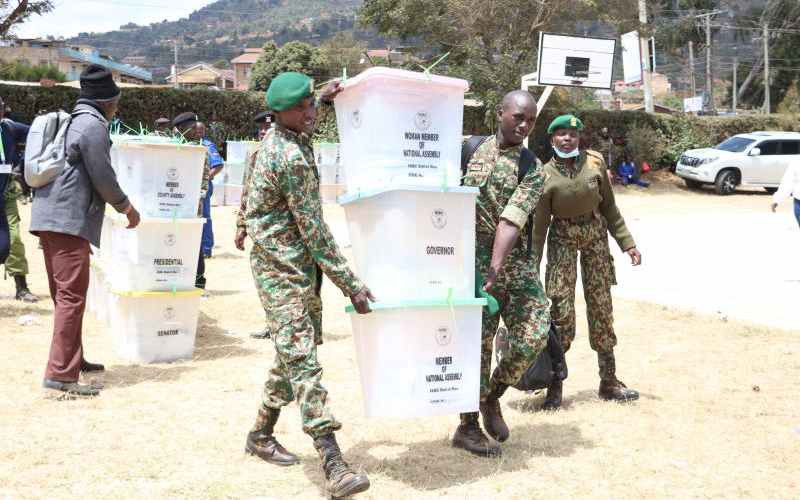 By Winfrey Owino 1 day ago
IEBC: How your vote moves from the ballot box to Bomas of Kenya 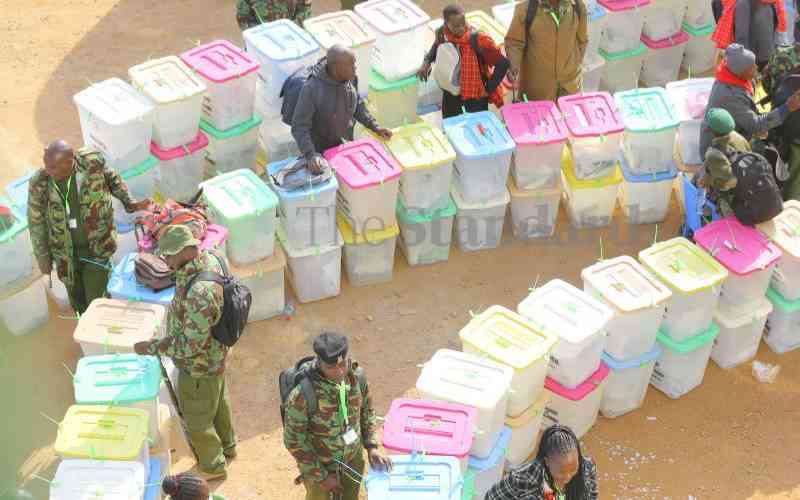