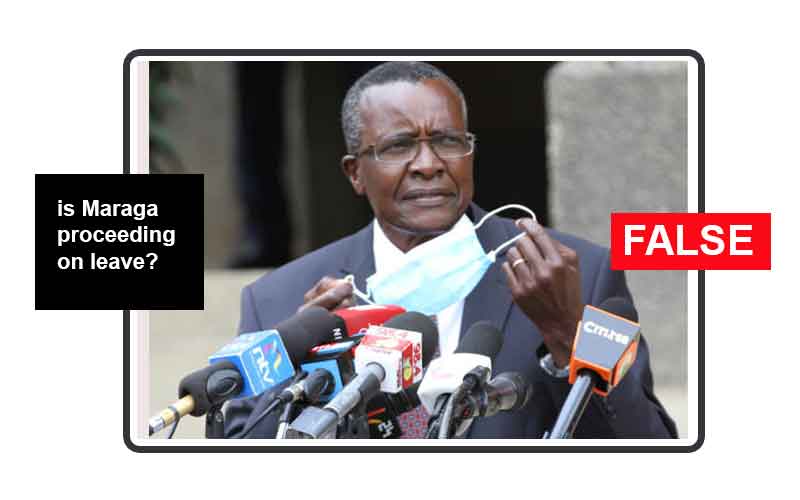 Chief Justice David Maraga will be proceeding on leave from June 19, 2020, pending his retirement.

That is the claim in numerous social media posts, which include a supposed letter from the Judiciary Chief Registrar Anne Amadi.

The letter, on a forged Judiciary letterhead and dated June 15, is FAKE.

Ms Amadi, who is also the secretary to the Judicial Service Commission, confirmed to the Standard Digital Fact Check Desk that the letter and its contents were false.

The Judiciary also labelled the letter as fake on Twitter.

"Honourable Chief Justice has accumulated more leave days than the remained of his working days to retirement date and would also like to give the county adequate time to recruits another Chief Justice as set by his predecessor Dr Willy Mutunga," the fake letter read.

It went on: "In accordance with the Constitution, the deputy chief justice will act as Chief Justice until such a time as the Judicial Service Commission will recruits a successor."

It is true his predecessor Dr Willy Mutunga left office a year before he could attain 70, because "he wanted to give the country sufficient time to recruit a new Chief Justice ahead of the August 2017 election."

The Standard Digital Fact Check desk traced the fake letter to one that was sent by Chief Secretary to the Malawian government last week after Malawi’s chief justice was forced to step down before the official end of his term.

Chief secretary Lloyd Muhara said Chief Justice Andrew Nyirenda has accumulated more leave days than the remainder of his working days until his retirement, due in December 2021.

"In accordance with the Constitution, the most senior Justice of Appeal will act Chief Justice until such a time His Excellence the president will appoint a successor," Muhara said.

Nyirenda was among the judges who in February annulled last year’s elections, which saw a narrow win for incumbent president Peter Mutharika.

The author(s) of the fake David Maraga letter used Mahara’s letter as a template, tweaking the words.

The fake letter adds to a growing list of attacks aimed at the Chief Justice as he wages a war with the Executive.

The banners carried images of the Chief Justice and some senior judicial officers who were the subject of the attacks.

Late that day, the Judiciary said attacks were meant to threaten and intimidate judges, but that the fight with the Executive will not detract them from discharging its core mandate of dispensing justice.

"While the Judiciary does not know the people behind these attacks, it is clear that the banners are a continuation of well-choreographed attacks on the Judiciary throughout this week. It is not the first time and we request police to investigate and bring the culprits to book," the Judiciary said in a statement.

On June 14, Maraga shared a video alleging to show the rot in the Judiciary.

"This is how low they have sunk in their determination to undermine the Judiciary and judicial independence," he said on Twitter.

The videos capped a week a war of words between Maraga and the Executive.

It started on June 8 with Maraga accusing President Uhuru Kenyatta of being out of order for disobeying two court orders to appoint 41 judges and for failing to rein in officials who continue to violate the rights of thousands of people.

The president, in a rejoinder through Attorney General Kihara Kariuki, accused the CJ of seeking public sympathy to hide his failures and mismanagement of the Judiciary and retorted that the president would not succumb to pressure from the CJ to swear-in judges with questionable integrity.