Fact Check: Does milk cause breast cancer? What to know 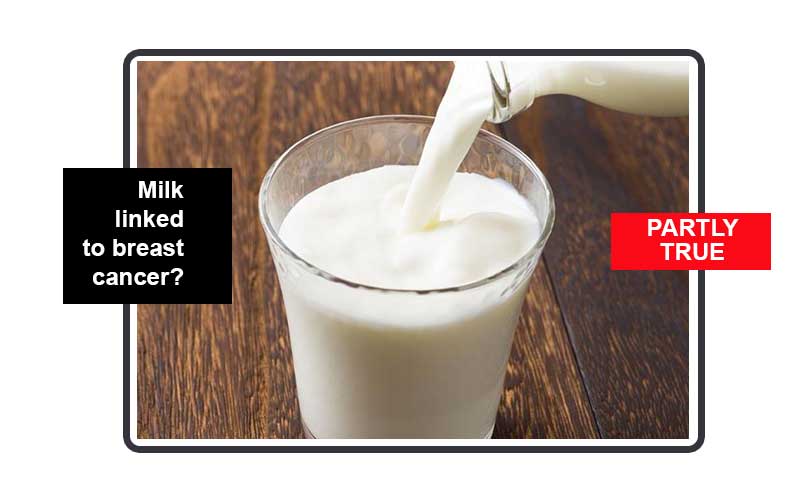 A post went viral online on Friday, claiming that “a worrying new study had warned drinking milk can increase your risk of breast cancer by up to 80 per cent”.

The Standard Fact Check Desk has established that the claim is PARTLY TRUE.

To give credence to the highly forwarded message, the initial publisher claimed the study had been broadcast by Standard Group’s KTN.

While it is false that the news outlet shared such findings, it is true that a study linked cow milk, a dietary staple for millions of Kenyans, to a greater risk of breast cancer.

The study’s greatest limitation, however, is that it was observational, meaning that there may be other factors associated with milk consumption that impact on breast cancer risk.

Researchers from the Loma Linda University in California, USA, said they found “fairly strong evidence” that drinking even one cup of milk could lead to a spike in the prevalence of breast cancer in women.

But aside from the study being observational, the researchers also only collected dietary information at one point, which would fail to account for the possibility of respondents changing their eating habits over the years.

The study titled ‘Dairy, soy, and risk of breast cancer: those confounded milks’ was published last Tuesday in the International Journal of Epidemiology.

According to the report, drinking a third a cup of milk a day was associated with a 30 per cent increased risk in getting breast cancer, while a daily full cup increased the risk to 50 per cent. And for those who drank two to three cups a day, the risk soared to 70 per cent to 80 per cent.

The researchers observed the dietary intake of 53,000 women aged 30 and older for nearly eight years, all of whom were initially cancer free.

By the end of the study, 1,057 women were diagnosed with breast cancer.

The study believes the association to breast cancer could be the result of the sex hormone contents of dairy milk as cows are lactating.

“Dairy milk does have some positive nutritional qualities, but these need to be balanced against other possible, less helpful effects,” cautioned Gary Fraser, the lead author of the paper, and a professor of cardiology and nutrition.

“The data predicted a marked reduction in the risk associated with substituting soy milk for dairy milk.”

Prof Fraser, however, underlined the fact that the results of the study suggest the need for further research.

Ahmed Komen, a clinical oncologist at Aga Khan University Hospital in Nairobi, agreed that the observational nature of study limits it.

He said it needs to be “interpreted with caution” as the research was based on a questionnaire administered after a long period of time.

“Conclusive clinical research that guides treatment is done in a phase three study that places people in two groups: those who take the milk and those that do not, and closely and objectively analysing them,” Dr Komen said.

He added that cancer is caused by multiple factors, and people need to understand the “food chain of what they consume”.

“It all narrows down to moderation and an awareness of where what you consume comes from. One needs to know how the food is grown, processed, packaged, stored and even sold to reduce the risk factors associated with cancer,” he said.

Catherine Nyongesa, who is also a clinical oncologist and CEO at Texas Cancer Centre, added: “This is an observational study and not anywhere close to being put in clinical practice. It will be many years before validation studies and meta-analysis can allow this to be recommended.”

The Loma Linda University study is not the first to link milk to increased cancer risk. A Harvard University study published in July 2003 examined the link between high-fat dairy foods and breast cancer.

It concluded that the “intake of animal fat, mainly from red meat and high-fat dairy foods, during premenopausal years is associated with an increased risk of breast cancer”.

It found that people who consumed little dairy had a decreased risk of getting lung, breast and ovarian cancer.

However, Walter Willet, the co-author of the 2003 report and a professor of epidemiology and nutrition at Harvard University, said the claim that milk increases the risk of breast cancer is unproven.

“Milk is very complicated, with benefits and risk. The evidence on breast cancer is still mixed,” he told Africa Check in 2017.

His colleague Eunyoung Cho also cautioned against making sweeping conclusions from the study.

“My paper only found an association with high-fat dairy foods,” Prof Eunyoung told Africa Check, adding that he would not generalise the findings to all dairy products or milk.

The International Agency for Research on Cancer also says there is a lack of published scientific evidence proving a link between dairy products and breast cancer.

“If anything, there is some data from epidemiological studies suggesting that the consumption of dairy products and diets rich in calcium might be protective against breast cancer,” Marc Gunter, who heads the nutrition and metabolism section at the agency, said.

According to Globocan statistics, which are compiled by the World Health Organisation and the International Agency for Research on Cancer, it is estimated that 5,985 new breast cancer cases were diagnosed in 2018. There were 2,553 deaths that year

The usual first symptom is a painless lump in the breast, although most breast lumps are not cancerous and are fluid-filled cysts

By Ernest Ndunda 11 mins ago
World Championship: Malkia Strikers pray for a miracle against Puerto Rico