No scientific evidence that wearing a bra causes breast cancer

By Africa Check | 2yrs ago 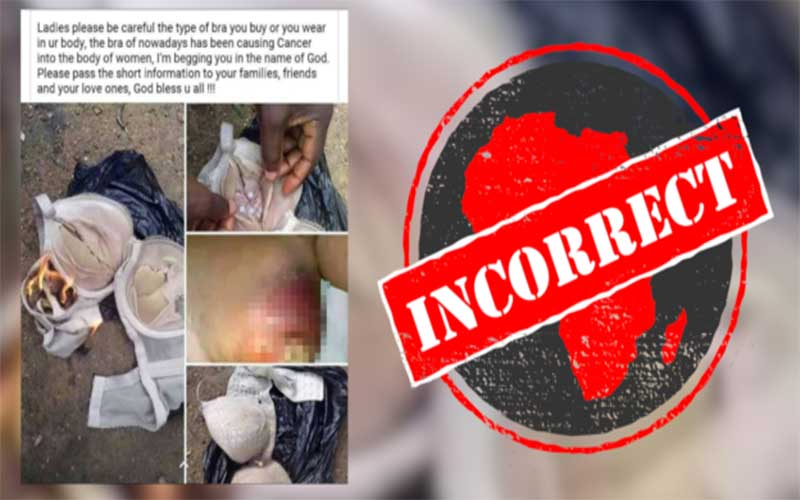 A meme posted on Facebook warns women and girls that wearing a bra, underwear that covers and supports the breasts, could be dangerous.

“The bra of nowadays has been causing Cancer into the body of women,” it reads.

It shows a disturbing photo of an inflamed and infected breast.

The meme has been shared more than 90,000 times, attracting thousands of comments, many of them expressing concern. But could wearing a bra cause cancer?

‘Wearing bra does not cause breast cancer’

Africa Check asked Dr Michael Gnant, professor of surgery at the Medical University of Vienna in Austria and president of the Austrian Breast and Colorectal Cancer Study Group, about the claim.

“There is no scientific evidence that wearing a bra causes breast cancer,” he said.

“This is false news and a myth that has been around for many years,” she told us.

Dr Javier Cortes, the head of breast cancer and gynaecological cancers at the University Hospital Ramón y Cajal in Madrid, Spain, also said there was no evidence, at all, to support the claim.

The Cancer Council of Australia, an organisation that promotes cancer-control policies and uses research and prevention policies to reduce the illnesses caused by cancer, says the myth seems to come from the book Dressed to Kill, published in 1995.

The myth is “based on the authors’ observations (not results of scientific studies) that women in western cultures who wore bras had a higher rate of breast cancer than women in traditional cultures who rarely wore bras,” it says.

The Cancer Council says a “single epidemiological study” from 1991 “suggested that breast cancer might be less common among women who do not wear bras”.

“This result was not statistically significant and the researchers note that the connection is most likely due to indirect factors, such as women who are obese (a known risk factor for breast cancer) and have large breasts are less likely to go braless.”

There is no scientific evidence that bras directly contribute to increased breast cancer risk.

This is backed up by an article on the American Cancer Society website: “There is no good scientific or clinical basis for this claim, and a 2014 study of more than 1,500 women found no association between wearing a bra and breast cancer risk.”

As the US-based organisation BreastCancer.org says: “There is no scientific evidence to support … these rumours.”

Women and girls should not be afraid of wearing bras.

By Mate Tongola 33 mins ago
Japhet Koome: A profile of President Ruto's nominee for IG