This is how to buy a condom, Kenyan style 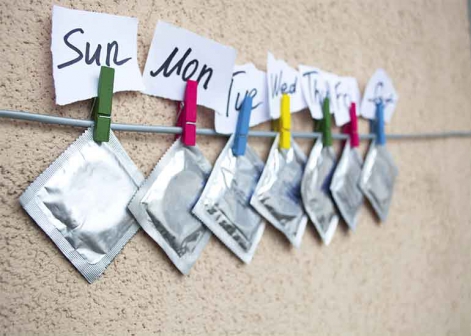 It is unfortunate that we live in a society where sex is demonised, with some religious types terming it evil. This wrong perception continues to propagate the ignorance that shrouds sex among Kenyans and in the process, exposing many to deadly diseases and unplanned pregnancies.

Most Kenyans have a negative perception and wrong cultural attitude towards sex. So much so that to most, talking about it is considered taboo. You mention sex and some people squirm in embarrassment. This state of affairs has led to an awkward situation whereby some Kenyans find it easier to have sex than talk about it! Others get so embarrassed about it that they only do it in darkness or while half naked!

As a result, buying condoms, which is likened to a public declaration that one is going to do have sex, has remained a herculean and shameful task among both the young and the old. The few ‘courageous’ ones, as one shopkeeper tells this writer, spend hours beating around the bush at shops before inaudibly mumbling that they want condoms.

Timothy Ogutu, a shopkeeper in Nairobi, is treated to drama almost on a daily basis by embarrassed customers who come to buy condoms at his shop.

“I get tickled here almost on a daily basis by Kenyans’ crazy antics before buying condoms. I have had grown men come here and engage me in long-winded tales without getting to the point. Some waste a lot of time here fidgeting, others nervously shift from one leg to the other, and the moment the last customer leaves, you hear them hurriedly mumble, of course as they look over their shoulders, nipe zile (give me those things) as they point at condoms!” he says.

He adds that the moment he hands them a packet, they hide them and disappear very quickly, perhaps due to embarrassment. You can imagine the disappointment of such a character, due to this hasty purchase done in record time, when he reaches home only to discover that he actually bought the wrong size.

Just imagine his agony when he, for instance, gets home ready for nookie, and just when he attempts to sheath up, he realises he bought those giant rubbers that can’t fit him.

Condoms have the shortest point of purchase time, Ogutu says.

“Buying condoms takes shorter time than anything else. Even shorter than the time it takes to procure contraband like guns and narcotics,” jokes Ogutu. One wonders, why do men get a shamed of buying condoms yet many have the guts to buy bhangi, guns and other contraband.

But at least men fidget, bite their tongues, stammer, beat around the bush, avoid eye contact and bore the shop keeper with unnecessary long-winded stories but at the end of the day, they buy the damn things. Women just can’t buy them, either the male or female condom.

There is perception among most women that condoms are a ‘man’s item’ because it’s them who wear it. Thus, such women see no point of risking embarrassment or stigma of being judged on suspicion of being promiscuous by buying and walking around with condoms for health and safety purposes.

A woman knows only too well that it’s that time of the month when she is under the influence of some raging hormones and will likely get ‘naughty’ that night, but never equips herself with a condom.

She knows she plans to tempt and jolt her object of desire into action that night. Oh yes, she has been sending him some naughty text messages, hinting about bedroom fireworks on WhatsApp and Facebook messenger. Hell! She even has her sexiest lingerie on.

Come evening, she meets the man, and after two or three bottle of beer, she flings off her clothes like they are on fire; digs into the kiss with fury and then when the man is at a ‘point of no return’ she pause and whispers, “Honey, do you have a condom?”

For crying out loud, why don’t women just gain courage and learn to buy and walk around with condoms? They buy strange foods like mutura, boiled eggs, and even mitumba (second hand) underwear from hawkers on busy streets, so what is so hard about putting on a brave face and saying: “Please can I have a packet of condoms?”

When asked why she fears buying condoms, even the female ones, Betty Ciku says as much as she wants to practice safe sex and protect her health, she is not only clueless about condoms, but also finds buying them shameful.

Listen to her: “It’s more embarrassing for a woman to buy condoms. Again, much as I would want to risk the embarrassment of buying them, I’m told we have studded ones, flavoured and scented ones and all that, something I have no clue about. I would not want to be seen to know such crazy information.”

Fred Anami confesses to buying condoms, but says he can’t do so at a neigbourhood kiosk or where he is known.

“I do buy them, but can’t do so where I live. The shopkeeper will look at me in a bad way,” says Anami and adds, “I can’t buy condoms in a supermarket or a place where I have to queue!”

Why the shame of buying CDs

Anami says men, especially those not so blessed with a king-sized ‘weapon of mass procreation’, find it even more embarrassing to ask for the small-sized condoms, especially when buying from a woman shopkeeper or when female customers are in vicinity.

Rose Ndinda on the other hand has this to say: “We are so African that women are not supposed to be seen to know more about sex to the extent of walking around with condoms, its just doesn’t look good”.

She adds: “It makes men look at you differently. And when you attempt buying condoms, even the shop attendants give you a weird look. It’s just the way we are socialised.”