Am I inside? 10 things Kenyan women hate in the bedroom 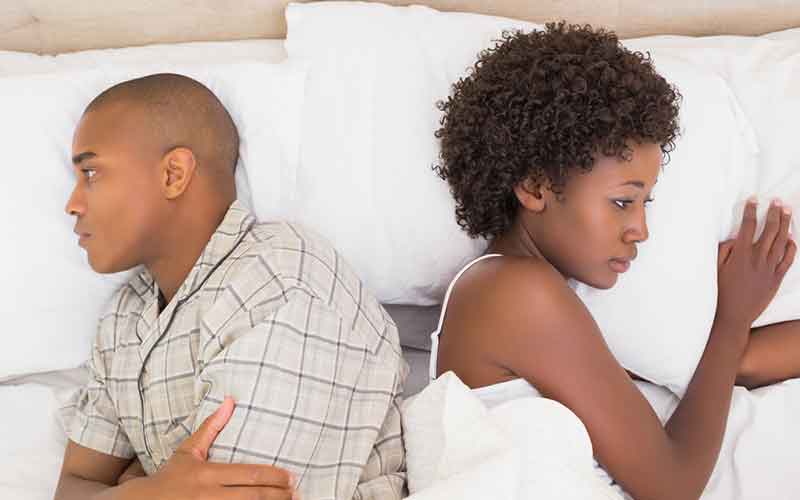 The Nairobian carried a story about habits that men hated most about women in matters bedroom.

The women read what the men said about coastal communities and some Baganda across the border and their way to ensure their men practice ‘zero grazing.’ They also read how some men go mad when a woman demands for money, before, or during ‘bedminton.’

Truth is, the women The Nairobian spoke to could not wait for their day to fungua roho on the bedroom habits of men that really get on their nerves. Here’s what they had to say

Boasting of sexual prowess when results show otherwise was one of the top things that tops in setting up your partner up for disappointment. L

Lucy Muriithi, an accountant, says that she has been a victim of such men more than twice. “I think I’m just unlucky. I mean, why can’t some men just be humble and quiet? Show. Don’t tell. If you’re good, I will be the first to tell you,” Lucy said.

Not unless you are Brad Pitt, whom we also believe puts extra effort in bed, laying back with your hands behind your head and expecting a woman to service you while you do nothing to her is pathetic.

Mary Nzisa, a boutique owner says that pleasing each other in the bedroom is a two-way traffic. “Yes, of course, we get turned on by pleasing you too, but it’s a two-way street. We don’t get turned on just by looking at you unless you’re in a movie.”

Women hate it when guys smell or have poor hygiene, so before you even think about hopping into the bed, you should make sure you’ve showered and don’t smell like you are a manager at some piggery in Ruai.

“Men need to know that it’s important to do proper maintenance down there. Nobody wants to use a toothpick to pull out hair because a man could not weed his tree,” Flomena Naisiae, a city nurse said.

Though some woman may like the body odour, but too much is bad; bad breath especially that of onions and garlic is the biggest turn off. If water and soap do not work, maybe it’s time to visit a doctor.

Zero communication and complete silence feels very disconnected, detached and just plain weird. Women need constant reassurance that whatever they are doing to you is working.

Alice Anyango says that she once had to dump a man she really liked because his silence made her insecure.

“He would just let me do my thing and never complimented or complained. I did not know what to think.”

Oh Brenda! You moan, yet her name’s actually Maureen! That definitely lowers your credibility and her passion for you. Not even an apology, massage and romantic dinner can save you from this one because she will never move on.

Some women like Florence Lorot find that insulting. “How now? That’s unforgivable. Period!” Florence says she cannot move on from that. “I will keep wondering whether he is thinking of her while on top of me.”

The simple truth about sex is women want to be with men who believe in their art. Agnes Mwatele, a bartender at a city bar confesses that she cannot be with a man who is insecure.

“If he keeps asking if I’m enjoying myself, if he is not touching the right places then I will definitely switch off.” As much as you do not have to brag about your skills, you should at least try and pretend that you know what you are doing. Confidence is key.

7. I will pluck out your weave

Being too aggressive is twice as bad as insecurity. When you try to push a woman around, you’ll display disgusting behaviour.

“I had this Sudanese boyfriend who was only concerned with his own pleasure. I never got to enjoy intimacy with him. He treated me like a princess but lacked basic manners in the bedroom. I could not tell him because I was scared of bruising his ego,” Susan Kiio, an NGO worker recalls.

Women also hate men who mishandle them down there. Do not bite her and neither should you use your sharp finger nails to explore the sensitive territory. It does not work.

A half-hearted attempt at foreplay is not just boring, but downright insulting. Women need foreplay and romance to get aroused. The build-up and foreplay is just as important as the ‘main act.’ Nancy Makena believes that foreplay is more important than even sex.

“Sex without foreplay is like cake without icing. I don’t even know how people do it. Do you know sometimes I can live with just foreplay?”

The first kiss is the most important thing when starting a relationship. It tells tales about your sexual compatibility and believe it or not, it also says a lot about you as a person.

Doreen Nkinda, a masseuse in a city spa says, “I once dated a well-known radio presenter who did not believe in kissing. He did not even want me to call him pet names.I started to feel like he only needed me in the house to clean for him and to satisfy him sexually. My needs were not important.”

While kissing is important, one must not confuse a woman’s face with the Mwea Irrigation Scheme. There is a very big difference between kissing and licking a woman’s face like a dog.

When a woman tells you she likes what you’re doing and not to stop, listen to her. There is no excuse for not paying attention. Peris Cheptoo was traumatised by the man who deflowered her because he was a poor listener.

“I thought it was common sense that when a woman cries out ‘ouch,’ it means she is hurting. He really hurt me during our first time,” Peris said adding that it did not stop there. “I had too many botched orgasms because my partner didn’t listen to me. I only started enjoying sex after breaking up with him three years later,” she disclosed.