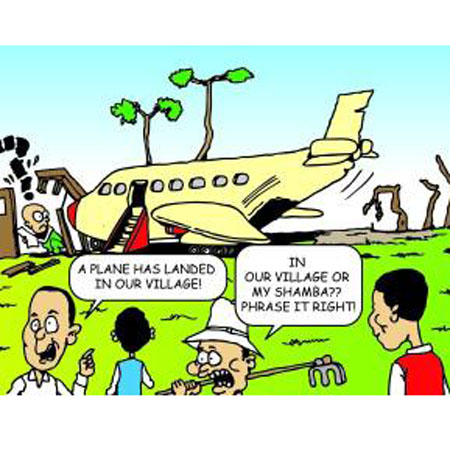 If something happens once, that is an incident. Should there be a repeat of the same, it becomes a coincidence; third time, it becomes a trend. Currently, in Uganda there is a growing trend of planes crash-landing. It’s amazing how Ugandans are milking this trend for all it’s worth.

First, the US Marines treated villagers in Mityana (Central region) to an interesting drama when their plane crash landed on a highway on the outskirts of Kampala.

They were headed to South Sudan when they encountered a fierce storm which forced them back to Entebbe. Enroute, they ran out of fuel, and an emergency landing had to be made.

I think the pilot must have been a former matatu driver, and had only fueled enough to reach the destination with no contingency measures to cater for “jam”.

The plane stunned locals and many took ‘selfies’ while leaning on it. And the local cameraman also made a lot of money out of the accident as villagers posed next to the plane to take photos.

However, things started to go awry when school girls started skipping class for illicit rendezvous behind the plane.

It had become a lovers’ lane or ‘green lodge’ of sorts with the lone guard making a killing from renting out the haven of love. After about 2 weeks, the plane was towed to a local airstrip, where it was fueled before it took off for Entebbe.

Barely a month later in July, a small aircraft had just taken off from Kabarole district heading for Arua when it nose-dived into a forest in Kyaka (Western region).

Villagers celebrated that an aircraft had finally made its way to their inaccessible location and stampeded the crash site.

However, police cordoned off the scene and school trips that had been arranged to take pupils to see the lplane were cancelled.

Villagers are still cursing the police for denying them a chance to make a few extra shillings to supplement their farming income.

The third incident occurred just recently when a Uganda Peoples Defense Forces (UPDF) airplane crashed and burned in Lira (Northern region). It crashed into a pit latrine, splashing and spreading fecal matter far and wide. The trainee pilot who was on his maiden solo flight had parachuted out to safety after he lost control of the plane.

Villagers rushed to the scene, leaving neighbouring farms looking like a scene after an elephant dance. We are no longer ignorant and unaware of our rights. Mr. Omara, owner of some of the land, is suing the Government to the tune of Sh1M for destruction of property and another Sh1M for causing trauma to his children!

He claims that he was hoping to harvest the peas, simsim and potatoes growing in his garden next month and the orange trees have been destroyed for good. His neighbour Mr. Odab in true keeping with the spirit of “dubbing” as his name suggests has copied his neighbour.

His suit for Sh250,000 is for the damage done to part of his land. He claims that his crops were damaged by flying debris and unknown chemicals have probably leeched into the soil and could cause future unknown damage.

I am sure all the herbalists and medicine men to the North and South of Central Uganda are imploring the gods to send them an airplane so that they too can milk the cash cow.