President Uhuru to open new Air Base in Garissa 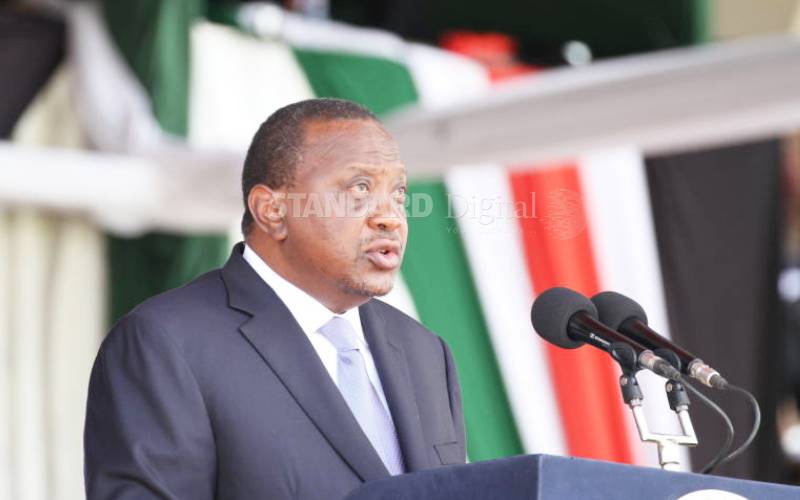 President Uhuru Kenyatta (pictured) and Garissa Township MP Aden Duale are expected to open Modika Air Base today. It will be the largest Air Base in the country. Modika Air Base will improve the security situation in north-eastern Kenya, going by the region's proximity to Somalia and by extent the al Shabaab threat.

The insecurity in Somalia broke out in 1992 following the ousting of President Siad Barre which was followed by civil war that decades later spawned Al-Shabaab. Al-Shabaab has launched numerous suicide attacks against targets in both Kenya and Somalia.  The launch comes a few days after eight police officers, two teachers and a doctor were among 11 people killed by gunmen in Wajir bus attack. Suspected al Shabaab militants on December 6 attacked a Medina bus headed to Mandera between Kotulo and Wargadud in Tarbaj, Wajir county. The militants reportedly flagged down the bus, ordered the passengers out before ordering non-locals to alight from it.

According to police reports, eight police officers attached to the Anti-Stock Theft Unit who were returning to their work stations, two teachers and a doctor died in the attack. Border porosity in Jubaland has been blamed for the increased threat, with insurgents filtering into Kenya. Uhuru will also plant a tree in memory of soldiers killed in the fight against terrorism. Politicians, among them Governor Ali Korane and Senator Yusuf Haji, are expected. Uhuru will also launch the Soldiers Legacy book which details  the challenges and victories of the military

Top of Kenya's worst tragedies is the January 15, 2016, El Adde attack. It is estimated that at least 210 soldiers died, or were captured in the early morning attack, the worst military loss for Kenya inflicted by Al Shabaab. The attack remains the deadliest attack on the AMISOM Peace Support Mission to Somalia and is Kenya Defence Forces largest military loss since independence in 1963. Official reports place the dead at 141. However, survivors’ accounts have put this number into doubt. The Legacy book also covers the development recorded in the military since 1964, when Kenya became a republic. President Uhuru is also expected to re-open the passport issuance centre in the area. Four years ago, the centre was closed after it became difficult to differentiate Kenyan Somalis from foreigners. Residents are elated at the reopening of the passport's office, saying a government office in the region will improve security. Uhuru is further expected to launch the electrification project in Raya, 15km south of Garissa town.