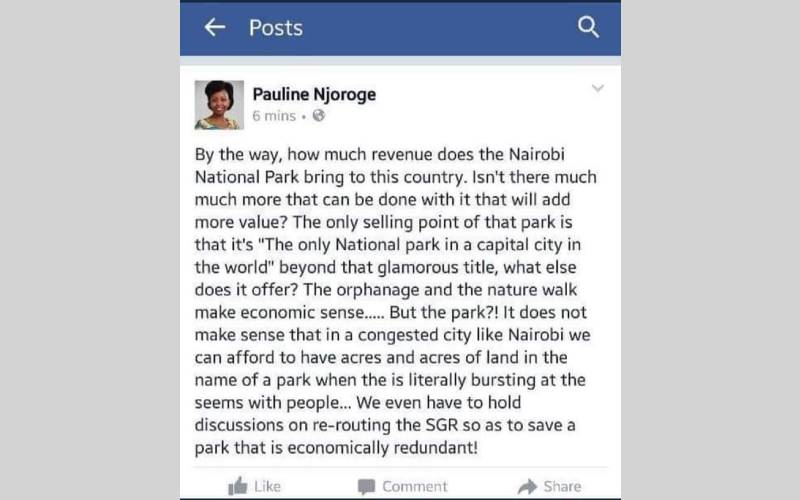 Tourism Cabinet Secretary Najib Balala has revoked the appointment of Pauline Njoroge as a member of the Board of Tourism Regulatory Authority.
Njoroge's posting was revoked after Kenyans on social media brought to the fore her previous post (pictured above) on the Nairobi National Park.
In her post, Njoroge said the only selling point for the park was that it was the only national park in a capital city in the world.
She was responding to calls to reroute the Standard Gauge Railway to save the park, which according to her was a lost cause as the park is "economically redundant". 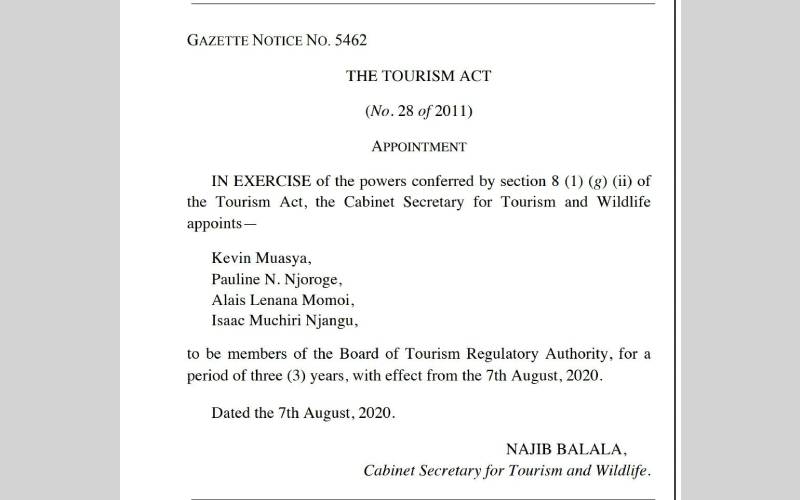 Cancelling the appointment, CS Balala said at the time, the ministry was unaware of Njoroge's stand on the value of the park.
Speaking on the sidelines of the official launch of domestic tourism campaign at the Masai Mara, Balala said the appointment painted the ministry in bad light.
He thanked the public for bringing to his attention Njoroge's remarks.
Balala said Njoroge's statements were rather unfortunate since the park is not only a national heritage, but one identified the world over.
"...because of that statement, I have already started the process of revoking...," the agitated CS says.

In a letter dated September 19 that year, the tribunal chairman JK Awuor stopped the planned construction on grounds that Nema had failed to conduct a feasibility study for the project, which is to be undertaken by China Roads and Bridge Corporation company.

"Take notice that the National Environment Tribunal has received an appeal from Okiyah Omtatah and Kenya Coalition for Wildlife Conservation and Management against Nema's failure to stop the project, which is currently underway without the benefit of Environmental Impact Assessment licence as mandated and required by law," said Awuor in the letter. Omtatah argued that without an assessment there is no room to explore an alternative route.

Kenyan tourism sector has lost about Sh80 billion since the breakout of Covid-19 in December last year.

“We lost 50 per cent of our revenue of Sh160 billion with the second half of the year being as good as zero,” Balala said in June at the Kenyatta International Convention Centre (KICC), Nairobi.

The CS also projected that for the first half of the current financial year, Kenya will get just 30 per cent of expected revenue. He attributed this massive drop to grounding of the aviation sector which is the largest contributor to tourism.

The tourism market also suffered significant loses with 65 per cent cancellations by domestic tourists; 38 per cent by regional visitors and 81 per cent being international tourists.

Premium After political revolution, can Ruto cause economic miracle?
Andrew Kipkemboi
By Andrew Kipkemboi
10 mins ago
Basic errors cost Malkia Strikers once again as they fall to Belgium
Volleyball and Handball
By Ernest Ndunda
14 mins ago
Premium Kenya only has 12 blood cancer specialists, ouch!
Health & Science
By Gloria Milimu
25 mins ago
Premium Three things that can speed up transition to cash-lite economy
Opinion
By Kevin Ayugi
4 hrs ago
.

By Andrew Kipkemboi 10 mins ago
Premium After political revolution, can Ruto cause economic miracle?

By Gloria Milimu 25 mins ago
Premium Kenya only has 12 blood cancer specialists, ouch!

By Kevin Ayugi 4 hrs ago
Premium Three things that can speed up transition to cash-lite economy
.