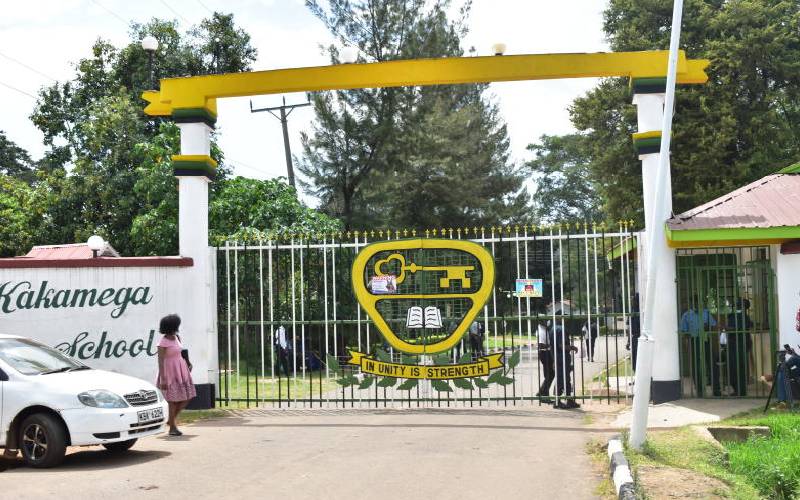 The High Court in Kakamega has temporarily stopped the management of Kakamega High School from demanding Sh21.6 million penalty from parents.

The school Board of Management (BoM) asked parents to pay Sh9,800 per student to compensate for damages caused by a fire that razed down a dormitory on November 6.

It issued a notice earlier asking parents to pay the fine and submit back receipts as proof so that their children can be allowed back to school.

Form Four parents who failed to comply with the directive were turned away by security officers and the school security guards who insisted on seeing the bank slips.

Justice W.M. Musyoka today gave orders quashing any resolutions that were made by the BoM.

“The applicant is hereby granted leave to commence judicial review proceedings and quash the resolutions of the Board of Management meeting held on the of November 10, 2021,” read the order in part.

The school, with a population of 2,265 students, was closed indefinitely following a fire incident on November 6.

Earlier this week, Form Four parents who accompanied their children started arriving at the school gate as early as 7am.

They were told to produce bank receipts confirming they had cleared the requisite amount before being allowed to enter the main gate.

Only parents who produced the bank slips were allowed in with their children.

“We are not against paying the money because our children are responsible for what happened, but the notice was too short, and we were not consulted. We request for more time,” said a parent who requested anonymity.

A parent who arrived with a notification from a Sacco indicating the money was to be out in one week was told to go back with her child. She wondered why the school administration was "demanding a lot of money". “I travelled from Trans Nzoia, and I have explained my situation to them, but they will hear none of it,” said the parent.

Another parent said he decided to pay the fine but was not happy with how the school management was handling the issue.

According to the school’s management, the actual damage as per the assessment by the Ministry of Transport, Infrastructure and Housing stands at Sh12.1 million.

The management also factored in Sh695,420 for the cost of CCTV installation in the yet-to-be-constructed dormitory, with the 280 double-decker beds cost put at Sh4.1 million taking the figure to Sh21.6 million.

School Principal Gerald Orina confirmed the statement was issued after the board meeting, and that the figures in the letter were correct.

"These figures came after our professional assessment of the burnt dormitory," he told The Standard on phone.

Earnings after tax rose by 131 per cent in the nine months to September compared to a similar period last year.

Security agents in Nakuru had to devise a plan of sneaking Tom Mboya’s body through the town on the way for its burial in Rusinga Island, Homa Bay.

By Augustine Oduor and Edwin Nyarangi | 1 hour ago