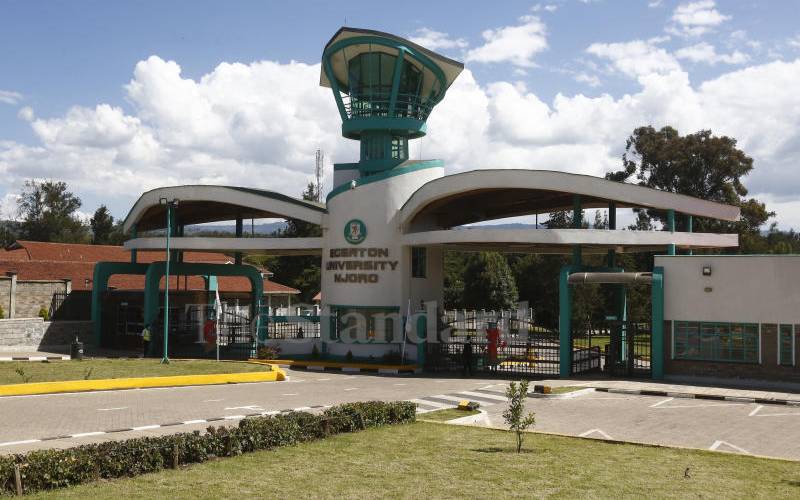 As public universities continue to wade in financial and managerial hardships, Egerton University, a global centre of excellence in agriculture has had a fair share of the challenges.

The institution is on the verge of being closed down following the withdrawal of services by lecturers and a go-slow by the non-teaching staff over unmet demands agreed on in previous engagements.

The university management in a unilateral decision slashed workers salaries by 40 per cent last year July as the Covid-19 pandemic aftershocks ravaged all sectors of the economy.

As physical learning resumed in October, the university failed to revert to full salaries, a move that sparked outrage among the staff.

The strike came at a time former Egerton Vice-Chancellor (VC) Prof Rose Mwonya’s term was coming to an end, and she had declined to take a terminal leave to pave way for new leadership.

On November 20, 2020, Prof Isaac Kibwage was appointed as the new VC and signed a return to work formula for the workers on how they were to be paid their accrued arrears.

In the agreement, Prof Kibwage promised that he would champion for their dues to be remitted to their accounts spread in a period of thirteen months effective November 30.

“The return to work formula was inclusive of the monthly 40 per cent pay cut arrears and a pending Collective Bargaining Agreement (CBA) which the new management has refused to honour,” said University Academic Staff Union Chapter secretary Dr Grace Kibue.

In February 2019, the university was forced to close down its Nairobi campus due to a shortfall in finances and a low number of students, who later joined its Njoro and Nakuru campuses or online.

In October 2019, the university’s woes sunk deeper after its bank accounts were frozen following a raid by the Kenya Revenue Authority (KRA) over an Sh856 million debt which it has partly been paid to date.

An audit report revealed that it was not remitting statutory deductions for the staff among them retirement benefits, members’ deductions to Saccos despite slashing colossal amounts from their salaries.

The university had also failed to remit to the National Hospital Insurance Fund (NHIF) a total of Sh695,000.

Later in December 2019, the university was indefinitely closed after students went on a rampage protesting the administration’s move to deny those with arrears to sit exams.

Strike at your own peril, Egerton University boss tells lecturers

500 lecturers strike over unpaid dues. VC says varsity is cash-strapped and not in a position to meet lecturers’ demands.

Kaptel Moran Dancers: At it for 65 years and still shaking legs

No political event starts before Kaptel Moran dancers are invited to perform.