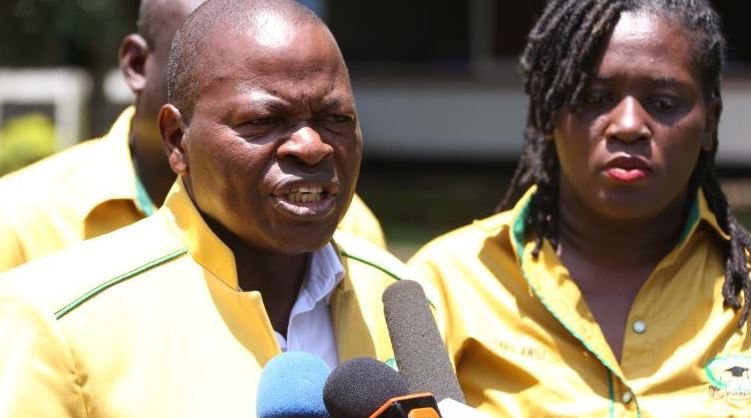 Kuppet Secretary General Akello Misori (pictured) said the entry of wrong data by TSC staff was not the making of innocent teachers. He warned that any attempt to alter teachers’ pay would be rejected.

“We forewarn you that the union will not welcome the victimisation of teachers whose salaries under the Collective Bargaining Agreement (2017-2021 CBA) may have improved as a result of TCS’s data entry mistakes,” said Misori.

He was responding to a circular by Macharia that instructed county directors to send fresh accurate data to be used during the last phase of the CBA payments due in July 1.

In the circular dated June 3, Macharia said data captured and presented to TSC by its county officials in 2017 ahead of first installment of the CBA were inaccurate.

“It has been established that some of you provided inaccurate and misleading data, leading to erroneous conversions,” said Macharia.

She said in the data presented to TSC, some ordinary classroom teachers were presented as belonging to higher grades exclusively reserved for institutional administrators.

Also, some serving as deputy or senior teachers were wrongly captured as headteachers.

This means that many teachers have for the last three years erroneously benefited from higher pay as data elevated them to higher job groups.

“You are required to carefully study the list and identify teachers who are not correctly placed or are not performing administrative functions yet their names appear as such in the data base,” said Macharia.

What has caused panic is the directive that teachers wrongly elevated to higher grades be captured in a separate sheet and their details entered in a template matrix attached for processing.

Sources said this means TSC is set to recover all the CBA money irregularly paid to the undeserving teachers.

In a letter dated June 17, Misori faults TSC for not involving the union when compiling data.

“The union made repeated requests between 2017 and 2019 to be supplied with copies of the implementation schedule for the CBA’s four phases. These requests were ignored,” said Misori.

He said that had TSC heeded to the requests, inaccurate and misleading data would not have been generated.

And now, Kuppet says they must be part of the data generation to ensure teachers are not unfairly victimised and those elevated confirmed in their new grades.

“We hereby ask for an urgent meeting with the Commission. We would be hard pressed to trust your rectification process unless it is done in a fully transparent manner,” said Misori.

Kuppet wants teachers currently in positions of administration and those whose salaries were converted upwards confirmed in such positions forthwith.

Following the roll-out of the CBA, the salaries of all teachers were immediately adjusted to reflect the promotions.

TSC also said all senior teachers who were between job group G and K were moved to C2, equivalent to job group K.

Kuppet threatens to withdraw teachers from Kapedo, Baringo over insecurity