Tragic case of drug abuse in schools and homes 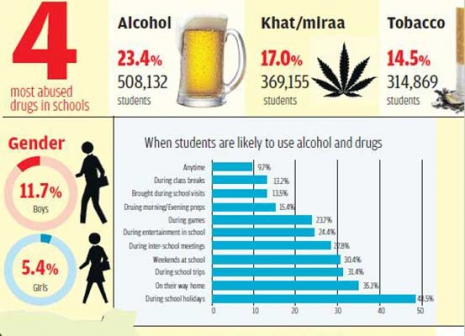 Students as young as 13 are smuggling alcohol and other drugs into school and home compounds in a national shame that has been captured in a new countrywide government survey.

The new National Authority for the Campaign Against Alcohol and Drug Abuse (Nacada) survey also reveals that students are using all tricks possible to abuse drugs during school visits, during school entertainment or at night in their dormitories.

So bad is the situation that the report, dated October 2016, calls for aggressive measures to target children aged between 13 and 15, terming the period the most likely for children to initiate alcohol and substance abuse.

According to the study, the median age of the children who admitted to using bhang was 15, the time when most of them are in Form Two and undergoing puberty.

“Students are likely to initiate prescription drugs and inhalants at the age of 13 years,” says the National Survey on Alcohol and Drug Abuse among Secondary School Students in Kenya.

“The students are likely to initiate alcohol, khat/miraa, tobacco and heroin at the age of 14 years,” it adds.

The survey shows that the age of onset of alcohol and drug use marks the period of transition from primary school to secondary schools.

“The age between 13 to 15 years presents the most critical period for the students in secondary school to initiate alcohol and drug use,” it says.

The report comes in the wake of rising indiscipline cases in schools, most notably the bullying of junior students at Alliance High School where prefects reportedly physically assaulted other students. Others were made to sleep on graves of the institution’s founders.

Supervision and inspection of students for drugs in schools, the report found, was not strict enough to discourage drug and substance abuse.

“We are determined to work with all relevant agencies, including the Ministry of Education, to bring the issue of substance abuse in schools to an end,” he said.

A total of 3,908 students were randomly sampled from schools countrywide for the study. The survey showed that bhang, alcohol, cigarettes, cocaine, heroin, inhalants, mandrax and khat were all well known to students, with at least 80 per cent of them identifying them as drugs. The three top drugs and substances of abuse reported as most readily available to students in schools are cigarettes, alcohol and khat.

“Students reported that they can use alcohol and drugs discretely, a notion that could contribute to students carrying substances of abuse to school,” the report says.

According to the report, the majority of students (72.8 per cent) reported that it was possible for a student to use drugs without their teachers’ knowledge.

“The majority of students agree that the school environment provides opportunities for students to initiate use of alcohol and other substances of abuse.”

The highest proportion of students reported the home environment as the place where a drug or substance of abuse was used during the last time. In the case of alcohol, the home environment was reported by 14.5 per cent of the students as the place students initiated alcohol and drug abuse. It was followed by other occasions such weddings and parties (7.9 per cent) and pubs (4.1 per cent).

A high proportion of students reported accessing prescription drugs within the school. The study found that use of alcohol and other drugs of abuse by schoolmates closely mirrors use of those substances by close friends.

According to the study, the top four reported substances that schoolmates and friends were using include alcohol khat, cigarettes and prescription drugs. Others included chewed tobacco, shisha, kuber and sniffed tobacco. The least mentioned drugs and substances of abuse are rohypnol, heroin, mandrax, cocaine and inhalants.

The study found out that alcohol and drugs were more likely to be used during school holidays (48.5 per cent) and on their way home (35.1 per cent).

Within the school environment, the report says, students were more likely to use drugs during weekends.

The commonly ever used tobacco products in a student’s lifetime include cigarettes, shisha, chewed tobacco, kuber and sniffed tobacco.

The findings show that alcohol was the most commonly used substance of abuse by students in the six months preceding the survey, followed by use of prescription drugs, khat/miraa bhang, inhalants, heroin and cocaine.

The study showed that alcohol was the most commonly used substance of abuse by students in the last 30 days (current use), followed by use of prescription drugs, khat/ miraa, bhang, inhalants, heroin and cocaine.

The study found that schools lacked proactive strategies to deal with alcohol and drugs.

“Indeed, the guidance and counselling teachers only get involved when cases of drugs and substance abuse were reported,” the study said.

The report calls for a new approach to tackling alcohol and drug abuse in the school environment. It calls for the curriculum to facilitate the equipping of students with the relevant knowledge on drugs and other substances of abuse.

“Nacada should therefore work with relevant stakeholders to put up a curriculum that also encompasses the other aspects of life skills training,” the study proposes.

It also recommends that Nacada works together with the Ministry of Education to provide relevant training to guidance and counselling teachers to empower them to deal with the emerging challenges of alcohol and drug abuse.

Besides, guidance and counselling teachers should be given fewer lessons to allow them more time to deal with students issues. The study suggests that Nacada helps secondary schools to come up with school-based alcohol and drug abuse policies that holistically address the aspects of promoting free drug environments within the institutions.

By Victor Nzuma | 4 days ago

Who gets honorary doctorates, and what that says about varsities
;
Feedback